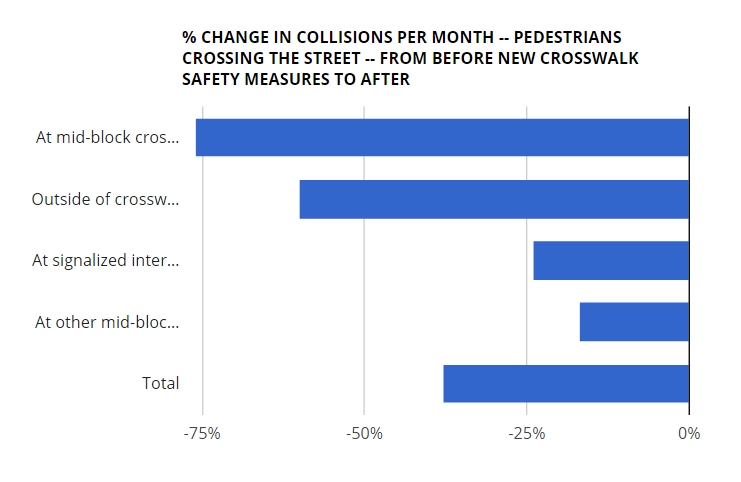 Collisions involving pedestrians crossing the street dropped 38% after West Hollywood added safety measures. That is according to an analysis of the city’s collision counts by WeHo by the Numbers.

Pedestrian deaths in 2013 and 2014 led the city and community members to take steps to increase crosswalk safety. Starting in October 2014, the city launched a public information campaign, enforcement efforts and safety messages on various message boards. By January 2015, in-street signs and reflective pavement markers had been installed at ten crosswalks. The city also began planning for traffic signals at five crosswalks.

We then calculated the reduction in collisions by comparing 2013 and 2014 combined to 2015 and early 2016 combined. The number of collisions per month dropped 38%. A test showed that the reduction was statistically significant. To date, 20 or more pedestrians may have been protected from collisions that might otherwise have happened.

The reduction in collisions was also calculated for different types of crossings. Collisions outside of crosswalks were down 60%, while those at signalized intersections declined 24%. Mid-block crosswalks without in-street signs saw a 17% reduction.

The biggest reduction, 76%, was at mid-block crosswalks with the new in-street signs. Those crosswalks had 13% of the collisions before the signs were installed and only 5% afterward. In-street signs have also been effective in other jurisdictions, according to studies reviewed by WeHo by the Numbers.

I have been saying this since 2014. We should replace some of these busier “flashing light” crosswalks (e.g., the one at Starbucks/24 Hour Fitness) with “red light” pedestrian crosswalks, like what they have near Canter’s, on Fairfax. I believe this would better throttle traffic and pedestrians, and pedestrians would have a crosswalk signal, so they would be less inclined to just wander into the crosswalk. Drivers would probably pay better attention as well, as they would have a red stop light, instead of flashing yellow lights. All that said, I’m glad to see that these measures seem to be working.… Read more »

Rob, jaywalkers count for a minority of collisions with vehicles.

The majority of collisions that cause injuries to pedestrians are through driver error – distracted, impaired, impatient, etc..

You throw anecdotes around but the facts don’t change. Car drivers are the main cause of deaths and injuries on the road.

While i rarely agree with Alison, in this case I do. Clayton’s death was tragic, but his own fault for jaywalking through the middle of Santa Monica Blvd. Have the pop up signs and lighted signs helped pedestrian safety? Perhaps, but if so, they have also emboldened pedestrians to step out into traffic at crosswalks & in between, without looking, without lifting their heads up from their cell phones, to a level that I have never seen before. At the intersection by the “gay Starbucks” and 24 Hour Fitness, it is not uncommon for pedestrians to walk through the intersection,… Read more »

Insert a 12″ long, sharp metal spike in the center of every car’s steering wheel. This safety feature will ensure Vision Zero to be realized within weeks of it being fitted to all cars

Yikes Chris!…..Please don’t use NYC as an example of what anything should be….it’s chaos there!

But I get your point.

While the ‘temporary’measurrs have had a positive impact on PEDESTRIAN safety, two years is definitely stretching the tdefinition of TEMPORARY. I personally think this whole issue is being brushed under the proverbial carpet.. For our current measures, we to analyze the potential impact on incidences involving vehicles only. Unfortunately, such an analysis would be nearly impossible to make. Also, pedestrian safety has been improving throughout most of the US and these trends are likely to continue. Distracted driving accidents are down. Cars with active vehicle & pedestrian impact prevention systems are quickly becoming the norm. I have one and if… Read more »

I just spent two weeks in NYC where pedestrians are highly alert crossing they street. They look then move swiftly. Pedestrians here are entitled, slow and clueless.
Look before crossing the street. Move quickly so traffic can keep moving. The burden is on the pedestrian because they’re the one who will lose their life if they’re complacent.

Hunt. You said it best. Install LIGHTED CROSSWALKS that light up the STREET crosswalk when a button is hit (not just flashing lights at a sign but actually in the crosswalk itself like an airline runway). Perfect solution at least to put in the major intersections.

As someone who walks and drives daily throughout West Hollywood, I blame the pedestrians. More often than not I see pedestrians just stepping into the street without looking left or right. If they do look, they assume the car will stop. Half of the time their face is in their phone. There’s also a sense of entitlement that they shouldn’t have to wait. They’d rather just stop traffic even though there will be a break in traffic within 10 seconds. It takes a 3000 pound car going 20 or 30 a lot more time to stop than it does a… Read more »

its seems to be that the WEHO city is trying to save money on this,,,,, why not install flashing lights at each crossing….when a pedestrian hits the button the lights flash on the sidewalk and on the road while walking. Install the yellow lights and stop being cheap!

This is common in many towns. The sometimes quick transitions from 55 mph to 35 mph to 25 mph produces an obvious revenue stream but more importantly safety in municipal districts and residential neighborhoods.

I wish everybody would stop holding up Clinton Bounds’ death as a symbol of bad crosswalks. He was jaywalking when he died. I truly feel that there is nothing wrong with our crosswalks. We have a problem with lack of enforcement of our laws. We have bad walkers and bad drivers. Putting a stoplight on every crosswalk will only make traffic worse. That increases drivers’ anger which increases bad decisions. We need more Deputies stationed on the West side solely to give traffic tickets to drivers and walkers, especially at night. I stay away from the Boystown area as much… Read more »