A single building fills an entire block along Santa Monica Boulevard. It might seem like a row of offices or maybe an old low-rise apartment building, but for most passersby, it is basically a block-long, inaccessible beige wall. At one point though, an ornamental arch appears, crowning an entryway that looks to have been sealed over for decades. At the peak of the arch is a small, wreathed crest featuring the silhouettes of a woman and a man, she in front, he behind. This odd vestige is actually quite revealing: the man and woman in this crest are Douglas Fairbanks and Mary Pickford, the most famous movie star couple of the early 20th century silent film era. The strange building behind their silhouettes is the edge of the sprawling movie studio they once owned, and one that, despite being nearly 100 years old, is still in active use today.

It’s no longer the Pickford-Fairbanks Studios, nor the United Artists Studio, nor the Samuel Goldwyn Studios nor any of the other names it would have over the course of its century hosting the production of landmark films like “The Count of Monte Cristo,” “Some Like it Hot,” “West Side Story,” “Apocalypse Now,” “The Green Mile” and “Hail, Caesar!”. Today it’s known as The Lot, and it has managed to mix historic soundstages and 1930s-era writers’ offices with brand new buildings and production facilities able to handle the high-tech needs of 21st century multimedia production. TV shows are filmed on The Lot’s stages every day, and recording studios and screening rooms are engaged in post-production on movies. The Oprah Winfrey Network occupies most of a newly built building and shares space with the Internet comedy studio Funny or Die. The mix of old buildings and new forms of media production is surprisingly symbiotic. Though many of its buildings date back to the 1920s and ’30s, The Lot is a modern movie-making facility, but one firmly rooted in Hollywood history.

The studio was originally opened around 1918 by Jesse D. Hampton, a producer and director of silent films. Located near the corner of Santa Monica Boulevard and Formosa Avenue, the studio was a relatively modest complex of a few buildings. Early films produced at the studio include 1920’s “Pollyanna,” starring Mary Pickford. In 1922, Pickford and Fairbanks would buy the studio from Hampton and expand. A studio backlot was created, where large-scale sets could be created for temporary use during filming. For the 1922 film “Robin Hood,” a ten-story castle was built on the site. It would later be replaced by an even more elaborate Arabian fortress of gold-plated domes and towering minarets for “The Thief of Bagdad,” released in 1924.

Aerial photography from around this time shows a cluster of warehouse-like soundstages at the north end of the property and a busy backlot at the south. Beyond its borders to the south and east, the land is virtually undeveloped.

In 1927, the studio evolved into the United Artists Studio, named after the artist-led organization Pickford and Fairbanks had formed with fellow Hollywood actor Charlie Chaplin and the director D.W. Griffith. It would be used to produce dozens of silent films, featuring such stars of the day as Holbrook Blinn and Irene Rich, and, of course, the likes of Pickford, Fairbanks and Chaplin.

In what would become a recurring theme, the studio nimbly adapted to the changing technology of these early days of filmmaking. With the advent of “talkies,” the United Artists Studio began recording audio, transforming its stage sets into soundstages in the late 1920s and early 1930s. A writer’s building, that block-long wall along Santa Monica Boulevard, was built in the mid-’30s. It included a secluded patio area that, rumors suggest, was equipped with a long trench in which Fairbanks would regularly run in the nude.

The gradually expanding studio spaces were opened up to independent filmmakers looking for room to film. Writers, directors and producers like Howard Hughes and Samuel Goldwyn would use the facility for their productions. Hughes had his own private garage, accessed off of Santa Monica Boulevard and connected directly to his office. George and Ira Gershwin had offices right next door to each other. Goldwyn, already one of Hollywood’s most successful producers, would soon become a dominant figure at the studio.

After a series of personnel disputes and the death of Fairbanks in 1939, Goldwyn and Pickford locked into a multi-year dispute over ownership of the studio. After years without a resolution, a judge ruled that the studio be auctioned off to the highest bidder. Goldwyn, along with well-funded partners, won the bidding, and in 1955 the studio was renamed the Samuel Goldwyn Studios. But because Pickford owned the deed to the land, she retained ownership of the backlot area, which was technically not included in the studio’s holdings because of the temporary nature of the sets. She then donated the land to the city of Los Angeles, which later turned it into the electric power distribution facility that still stands today. The border between the cities of Los Angeles and West Hollywood would eventually be drawn right between the facility and the studio, and a few of the studio’s buildings actually straddle the line.

Despite the tumultuous changes in ownership and operations, the studio would continue to thrive in the following years. Its sound stages remained busy, hosting productions big and small, from the dance/fight scenes from “West Side Story,” the pilot episode of the television series “Lassie,” the recording of Frank Sinatra’s “Concert Sinatra” album and “Fiddler on the Roof.” A few massive fires would claim a number of stages over the years, but the studio always managed to rebuild and stay afloat. And as the film and television business evolved, the studio evolved right along with it.

After the deaths of Goldwyn, Pickford and Chaplin in the 1970s, the studio was sold to Warner Brothers, which used it to film TV shows and movies throughout the ’80s and ’90s. In the 2000s, the entire facility was sold to private investors, who converted it into a fully independent production facility, where production houses could shoot and produce films or TV series without the need for their own large-scale facilities. Big studios like Paramount and Warner Brothers might be able to afford huge campuses of filming and production facilities, but an increasing amount of smaller players had a distinct need for professional-grade facilities and equipment, office spaces, rentals and editing spaces on an as-needed basis. “We’re like a hotel” for filmmakers, said Greg Harless, who manages The Lot. “They can show up with an idea and take it all the way though to completion.” The Lot continues to fill that need.

And the film industry continues to evolve. One of The Lot’s current tenants is a relatively new type of production, a trial-focused drama series produced for Amazon, starring Billy Bob Thornton and William Hurt. A lawyer’s office fills one of The Lot’s seven soundstages, and another holds a remarkably accurate recreation of a Santa Monica dive bar. Outside, production assistants drive by in golf carts, and extras dressed like lawyers and cops kill time between scenes.

Nearby stands one of the original buildings from the studio’s early days, now housing the wood shop and set building workshop under a beautiful wooden bow truss roof. Workers are building a section of an office hallway, while others put the finishing touches on a Catholic church confessional booth. Outside, the front half of a fake deep sea fishing boat sits next to a soundstage, seemingly abandoned and forgotten after its brief turn in some detective show or vacation scene. Like much of what’s scattered around The Lot, it will likely be used again by some other production for an entirely different purpose.

Another building holds wide audio mixing boards in front of small theaters where actors can re-record lines or dub over animated films. A case down the hallway holds a few Academy Award statuettes from past productions. In the back corner of The Lot sits a new parking structure, with extra high ceilings on its ground floor offering plenty of space to park the “star trailers” productions use to house actors on shoots outside of the facility. Near the center of the site is Global Cuisine, a restaurant serving some of the roughly 1,000 people working at the facility on any given day, which is also open to the public. It may not have the same cachet as the Paramount commissary, but when Oprah Winfrey’s offices are a stone’s throw away and Billy Bob Thornton is shooting scenes around the corner, the star-obsessed may consider visiting for lunch and a potential sighting.

Tellingly, one large section of The Lot is currently a hole in the ground. Construction workers are currently laying the foundation for another new building, expected to open next summer and draw in more of the 21st century companies that are changing the way entertainment is made and shared.

Just on the other side of the construction fence, the 1930s-era writers’ offices are becoming an increasingly quaint part of The Lot’s campus. Though some of the buildings here are protected by historic preservation designations, much of the complex has gradually been replaced by more modern facilities. This evolution is about keeping up with the changing demands of the entertainment industry, but it’s also chipping away at the physical remnants of one of the places where Hollywood was born. How many of those remnants will survive and for how long remains to be seen. But for those running and using The Lot, keeping it operational has as much to do with developing Hollywood’s future as honoring its past. 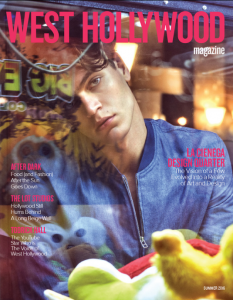 This story is from the Summer issue of West Hollywood Magazine, the magazine of record for a creative city known for its architecture, art, design, fashion, style and plain old fun. You can buy an individual copy or a subscription online here.