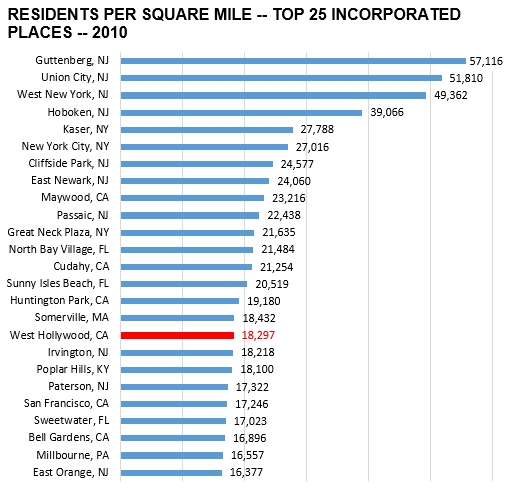 West Hollywood is the 17th most densely populated city in the US and the fourth most in California. That’s according to a new analysis by WeHo by the Numbers.

There were only 16 cities with higher densities than West Hollywood. Ten were in the greater New York area. New York City itself was number six. If Manhattan were a separate city, it would have been number one, but the other boroughs were not as dense, so the average for New York City as a whole was lower.

Also ahead of West Hollywood on the list were two cities outside Miami, one outside Boston, and three in Los Angeles County. Those three were Maywood, Cudahy, and Huntington Park. Two other California cities, San Francisco and Bell Gardens, were in the top 25, but lower down than West Hollywood. Santa Monica was number 127.

The actual differences are even bigger than the percentiles suggest. West Hollywood’s population density is 70% higher than Santa Monica’s, more than twice as high as that of Los Angeles, and three times that of Beverly Hills.
For more details and a comparison to Los Angeles’ denser neighborhoods like Koreatown, please see the WeHo by the Numbers article, How dense is West Hollywood?

West Hollywood’s density is what allows it to have many stores, good bus service on various routes, and a much more walkable fabric than most of LA. It’s a feature, not a bug.

You can’t really complain about irresponsible development as it it just “happens”. There are public processes. The public hearings on the Movie Town Plaza project saw plenty of neighborhood opposition and it was rejected by the Planning Commission. On appeal to the City Council, the City’s own transportation manager testified that the project would create gridlock on Santa Monica and push huge amounts of traffic on to the residential streets. But somehow the City Council approved it. Of course they will tell you that campaign contributions have nothing to do with how the voted.

I’m all for development and re-development. But my gosh, what prevents us from being smart about it. AND always taking traffic into account. 3 new mega residential developements within 2 blocks of each other on SaMo Blvd (Dylan, Movietown and Domain). Be careful what you wish for – I was so excited to have MovieTown redeveloped only now to be engulfed by a moster building sure to overtake my quiet residential “cut-thru” street with new residents looking for short cuts. Not to mention more bottlenecking between Vista and La Brea. Uggggggh!

The only thing more dense is our zoning commission and council for having created this mess. In the name of development, we will get worse traffic, higher auto insurance rates, more water use, more crime, and less quality of life. The developers will be long gone and the residents left with city more dense than some of the poorest in the nation. All of this mess and our retail landscape is in shambles.

Weho aspires to be #1 with all of this bulldozing of the city to construct apartments/condos nobody wants. What a joke!!

Not an enviable position. When one factors in the dog population and all the folks “just passing through” on a daily basis leaving their carbon footprint, and the transient tourists w little respect for the community, seems just a bit on the unhealthy side. Revenues have their limits and can be inversely proportionate to the quality of life.Tightly packed sardines roasting in a can, under the palm trees is not an experience to aspire to. We have passed the tipping point.