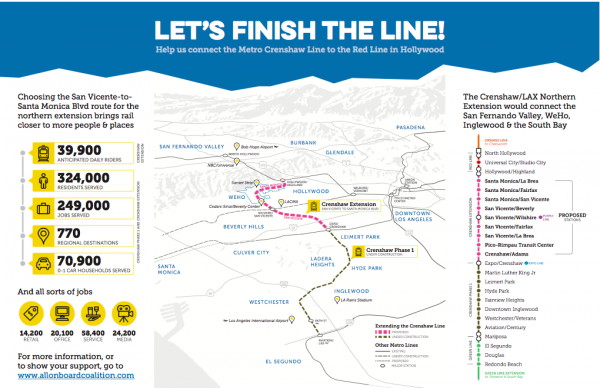 West Hollywood seems likely to have made the cut in Metro’s plan for how it would use money from a proposed sales tax increase to expand L.A. County’s mass transit network.

According to The Source, a blog that covers transit in L.A. County, a proposed extension of Metro’s Crenshaw Line to connect with the Hollywood/Highland Red Line station in Hollywood is listed as a priority by two of Metro’s six sub-regions. The Crenshaw extension also is listed by Metro as one of its “shovel ready” projects. That gives West Hollywood officials hope that the Crenshaw extension will be on the list of projects to be tackled first that the MTA staff is expected to release at the end of this week.

The Crenshaw extension would be one of a more than a dozen likely Metro projects, including a station near Los Angeles International Airport at which passengers on Metro’s Crenshaw line could connect with a monorail that would deliver them to airline terminals. Among other possible projects are a rail line on Vermont Avenue, an extension of the Gold Line on the Eastside of Los Angeles and a rail line running through a tunnel through the Sepulveda Pass that would link the San Fernando Valley and the Westside.

To finance the various projects, Metro’s board will have to agree to put on the November 2016 ballot a proposal that must get the support of two-thirds of voters. The proposal would extend for 20 years the half-cent sales tax increase that was part of Measure R, which voters approved in 2008. It has been projected to raise $40 billion over 30 years. The increase took effect in July 2009 and is set to expire in 2039. A little more than a third of its revenues are dedicated to new rail or bus rapid transit programs. The ballot proposal also would include an additional half-cent sales tax for at least 40 years, with half of the money generated likely to be allocated to each of Metro’s subregions by using a formula based on population and employment figures.

According to Fehr & Peers’ Direct Ridership Forecast, an extension to the existing 8.5-mile long Crenshaw/LAX Line through West Hollywood could increase ridership by more than 300%. The Fehr & Peers study also notes that while the San Vicente/Santa Monica route is longer, it is closer to more office, service and entertainment jobs per mile (11,415), has more destinations with walking distance (38 per mile) and more low-wage workers employed along the route (3,825 per mile).

The City of West Hollywood has gotten active in lobbying for that route. in December the City Council approved contracts with Dakota Communications and the Robert Group to create an outreach and advocacy campaign. The result is two coalitions, West Hollywood Advocates for Metro Rail (WHAM) and All on Board Coalition, which is a group of organizations and institutions along the existing Crenshaw Line and its proposed extension routes. The two organizations have been involved in producing advertising and other marketing materials to support the Crenshaw extension. All on Board has a field team whose members have gathered signatures at a broad range of events such as the Bilal Mosque Event, the Baptist Ministers Conference and the Kingdom Day/Leimert Park Festival.

Jose E. is the smartest: like the new NoHo portal & the BLOC connection at Metro Ctr, the Ped passageway can be done. When I went to New York, connecting btwn the 6 & L lines, it felt like I went a mile (but I knew I didn’t walk that far in the passageway!). The La Cienega-San Vicente passageway is feasible!

I think that the WeHo proponents of the northern extension are overlooking potential allies in support of the Crenshaw Line extension who live or work in the South Bay cities of Redondo Beach, Hermosa Beach and Manhattan Beach. That’s because the southern terminus of the Crenshaw line is at the Redondo Beach park & ride lot on Marine Avenue, which is immediately adjacent to the large Northrop Grumman aerospace facilities, and near the Raleigh studios, as well as the South Bay beaches, shops and restaurants. Without the Crenshaw Line extension, there is no way other than traffic-choked roads like La… Read more »

The graphic above shows a proposal for a purple line connection at San Vicente and Wilshire.

I think this should extend to West Hollywood’s west side (San Vicente/SMB). If they are going to do this, do it right the first time, and make reach as much of the area as it can. That station is important for people who work at the PDC, and for West Hollywood nightlife.

Of course it will connect with the Purple Line. The stop at San Vicente/Wilshire is practically next to the Purple Line’s Wilshire/La Cienega stop. Since both stations would be underground, they could simply connect them via passageway.

There’s no stop on the Purple Line at San Vicente (only La Brea, Fairfax and La Cienega).

Conceivably, if this route is recommended, the Crenshaw line could jut over to La Cienega just before Wilshire and return to San Vicente before reaching Beverly Center. More $ and additional commute time, but provides a direct underground connection.

It would be great if we ONLY had light rail and, PUBLIC transit down Santa Monica Blvd completely banning any and all private automobiles. The carbon foot print would be greatly reduced and, the safety to pedestrians would be greatly increased. All this could easily be done for the City of West Hollywood and the entire Los Angeles area!

I believe the Purple Line extension, currently under construction, would intersect with the proposed Crenshaw extension at Wilshire and San Vicente. Excellent for riders and commerce to West Hollywood.

While we all have our favorites, any of the options are going to be good for West Hollywood. For once the community and it’s leaders have all been on the same page and we are seeing positive results. Thanks to our City Council members, City Staff and countless members of the public who kept this issue before Metro.

While the San Vicente/Santa Monica proposal is intriguing, it has two big flaws:

1- no direct connection to Purple Line. The Purple has stops at Fairfax and La Cienega. Metro would not add an infill stop just for the Crenshaw extension.

La Brea might be Metro’s preferred (cheaper) route, West Hollywood might have better success pushing a La Cienega route. Otherwise, the best compromise that hits many key areas without going too far west is Fairfax.