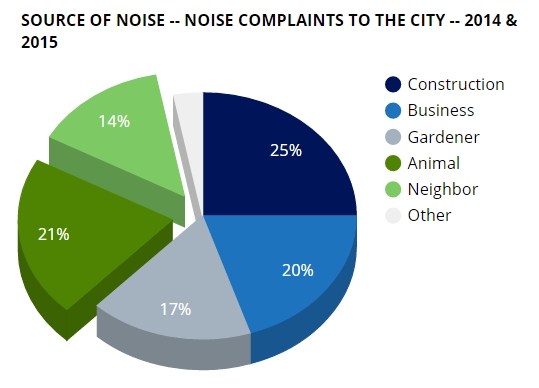 Construction was the biggest source of noise complaints received by the City of West Hollywood in both 2014 and 2015, according to a new analysis of city data by WeHo by the Numbers.

The analysis looked at 1,862 noise complaints made over two years. The number of complaints did not change much from year to year. There were 922 in 2014 and 940 in 2015, excluding duplicates. Since the data came from the City of West Hollywood, the numbers do not include complaints that were made only to the sheriff’s station.

The following excerpts illustrate the kinds of complaints the city received about noise generated by construction, local businesses and gardeners:

About one-third of noise complaints to the city were about noise from neighbors (14%) or their pets (21%). Half of the neighbor noise issues were due to loud music or parties. Examples of neighbor/pet complaints include:

For more information, please see the Weho by the Numbers article: What West Hollywood noise do people complain to the city about?

Manny that ps, was said in a joking way…but this IS a city…we may not be anywhere near as big as New York, but this notion that we’re some little village somewhere is a very Pollyanna way of viewing one of the most densely populated cities in the nation. Surrounded by an even larger city. If a leaf blower bothers them, I would suggest that choosing West Hollywood to live probably wasn’t the wisest choice for their sanity. (Chris, I agree with you)

Bingo JJ. I’ve lived in busy sections of Chicago and Manhattan, this is much quieter in comparison. No place in the country as much a center of a metro area and densely populated is as quiet as WeHo.

JJ…..You’re right, but we don’t live in NYC or a “real city” as you say…..and I think most commentators would like to keep it that way.

I’ve had people block my driveway before…had them ticketed and towed. I had to get out of my driveway! (I sometimes block my own driveway for extra parking…and as long as you’re the homeowner and you’re blocking your own driveway…, you can do that). As far as noise goes, we live in a city…and everything that comes with it. When you live 5 feet from your neighbors, you’re gonna hear them. If it’s continuous, obnoxiously loud noise, talk to them…usually they’re unaware that they’re bothering anybody. I do have a problem with hearing the Abbey blast weekend nights and SundayFunday… Read more »

Lol. Manny, it IS the property next to me, and they are planning an 18 unit building across the street from me! You hit the nail on the head.

Ah yes, remember in the old days (7 years ago) when someone would buy a little house and spend two months putting in a new floor and kitchen?

Now when someone buys a little house they tear it down, dig a 25 foot hole in the ground, pump out an endless stream of dirty water and hammer away for a YEAR AND A HALF!!!

…….and that’s just the property behind you….the one across the street may be next.

Noise abatement laws should be not only for nighttime hours. There is plenty of obnoxious noises that can/should be covered during the day also. Many people these days work from home, are disabled and are home all day, etc. Personally, I had to put up with a neighbor who BLASTED her TV (in Russian) all afternoon for over 25 years. I lived directly opposite her and couldn’t even think straight when it was on. She finally moved out (into some sort of assisted living facility, I believe).

Blocked driveways are currently tricky. Apparently the city can ticket but not tow. Perhaps another amended ordinance. Ka-Ching!

Yes. They won’t tow! I called about the SAME vehicle at least five times for parking in red by hydrant which blocks the vision of anyone exiting our garage of incoming traffic.. I have sseen the vehicle ticketed at least three times. He doesn’t care! It is just forwarded to expenses of the developer. Parking enforcement confirmed they can’t tow.

So much agreement here. Not only noise, but I have had to deal with blocked driveway by construction truck, two inch nails flying over in the driveway of my building, food trucks blocking and parking illegally, construction company trying to reuse expired parking reservation signs, I could go on….all from a monstrosity being built next door of 7 condos starting at 2.5 MILLION being built next door. Code compliance has been mediocre at best and even told me the nail issue was out of their power and told ME to go speak to the construction manager. And of course, it… Read more »

Construction may be 25% of noise complaints but neighbor, animal and gardner complaints together total 52%. Not everyone lives next to a construction site but virtually every resident is directly affected by noisy inconsiderate neighbors be it loud music or partying at inappropriate hours, neighbor’s barking dogs and virtually every property owner’s gardner that never met a broom and a rake. Generally construction has a beginning and an end with specific restrictions but the other collective noise is endless. Add to that drivers blasting other folks with horns because they lack patience. We live in a cacophony of unnecessary noise… Read more »

NOISE ABATEMENT needs to be addressed of course, but our city is one of the most densley populated in the country, old thin wall constructed apartments are crammed together and we’re a tourist, entertainment, partying town too. Construction noise complaints are either a sign of the progress our City is making or workers ignorance of the hours allowed for such noise. Gardener noises, if they’re within the allowed hours, not a problem. As for “Others” does this include low flying helicopters, odd vehicle horns (songs, etc) and party crowds? Please folks you gotta let people live. Then there is the… Read more »