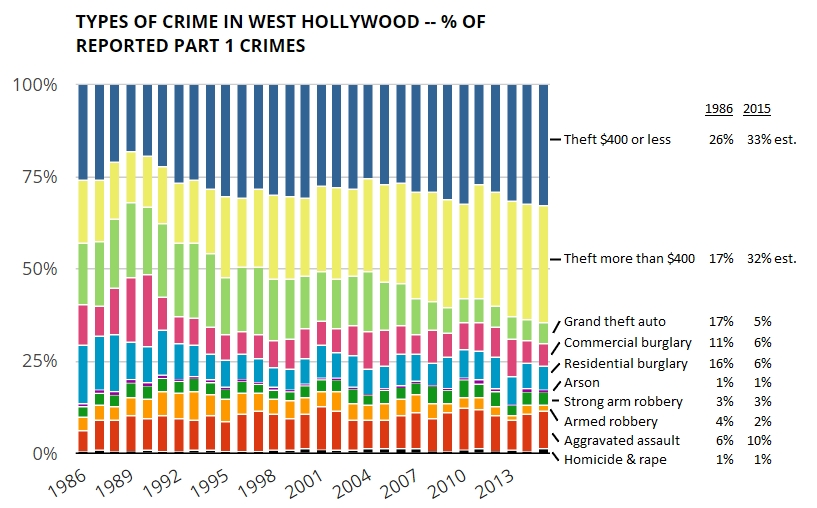 The mix of crimes in West Hollywood has changed over time as the overall number of serious crimes has declined. That’s according to a new analysis by WeHo by the Numbers of 30 years of crime statistics from California’s Office of the Attorney General and sheriff’s reports.

Crime in the city dropped 63% overall between 1986 and 2015, based on the number of reported Part 1 crimes. Each of the different types of crime also declined, but by different amounts. So the mix of crimes changed over the period. By 2015, some types of crime were a bigger share of the smaller total. Other types were a smaller share, because they declined more than 63%.

The biggest changes were in the mix of property crimes, including thefts, burglaries and grand theft auto. Thefts went from 43% of total crime in 1986 to 65% in 2015. The actual number of thefts dropped 45% over this period, but other crimes dropped more, so thefts made up a bigger part of the smaller total. These theft numbers include vehicle burglaries.

The accompanying chart splits thefts into those with a value of $400 or less and those with a value exceeding $400. The split was estimated for 2015. $400 used to be the limit between petty theft and grand theft. The limit was raised to $950 in 2010.

Taken together over the 30-year period, violent crimes were a fairly stable share of all crimes. Violent crimes include strong-arm robbery, armed robbery, aggravated assault, rape and homicide. The percentage moved up and down but stayed within a range of 16% to 20%. It was 18% on average and 17% in 2015. The two exceptions were 1986 (the first year of available data) and 2013. In both years, violent crimes were only 13% of the total.

To find out how West Hollywood’s crime mix compares to Beverly Hills, Culver City, Los Angeles, and Santa Monica, please see the Weho by the Numbers article: How have the types of crime in West Hollywood changed?