The Pacific Design Center (PDC) has riled some of its tenants with six-figure bills for services delivered as long as five years ago.

The tenants, none of whom were willing to be identified publicly for fear of angering the Charles Cohen of Cohen Brothers Realty, owner of the PDC, said the bills delivered in the last few weeks have ranged from $85,000 to $200,000. 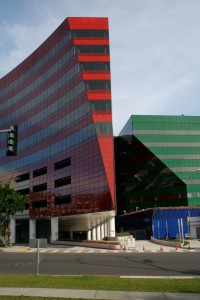 A copy of a bill reviewed by WEHOville showed that the PDC was demanding that tenants “true up” their accounts by paying for previous electrical, operations and promotional expenses incurred on their behalf by Cohen Bros. “True up” is an accounting term that means bringing actual costs into alignment with budgeted or estimated costs. In this case, the PDC is saying that it spent more on operations, promotion and electricity for each client than it had anticipated.

One tenant said he and others were stunned because the bills covering long-ago expenses “just came out of no where.” The tenant admitted that there were provisions in the PDC leases that allow Cohen Bros. to make such retroactive claims.

The PDC sits on a 14-acre campus bounded on the south by Melrose Avenue and on the west by San Vicente Boulevard. It was designed by the noted architect Cesar Pelli. It houses wholesale apparel, furniture and other furnishing dealers. The PDC added its Red Building in 2013. After struggling to find tenants willing to agree to its long-term leases and relatively high rents, the building has begun to attract tenants that are renting smaller spaces and have less social cachet than what the PDC was looking for. One of those tenants is Grindr, the gay hookup app, which announced last month that it was moving to the PDC.

The PDC did not respond to several requests from WEHOville for comment on the complaints by its tenants.