Should the Schindler House become the St. Louis Rams of historic landmarks and just pick up and move somewhere else?

That question could have been the underlying current 13 years ago when a group of the world’s greatest architects gathered on North Kings Road to present their concepts for the most compatible kinds of development alongside Rudolph M. Schindler’s modernist masterpiece.

The immediate issue was a developer’s plans to build condos next door and the prospect – real or imagined – that another high-rise building as a neighbor would damage the fragile balance between the studio-residence and its site. High-rise condos already overlooked the Schindler House on its north side.

Longer term, the ever-increasing density of the neighborhood surrounding the Schindler House recalls a time in the mid-1980s when its owners debated whether to sell the property and rebuild the house in the desert to preserve its integrity.

Schindler built his home in 1922 using concrete, redwood, glass and canvas. With its open floor plan, flat roof and sliding doors, it challenged the traditional distinction between indoor and outdoor space, and the design became a model for later California architecture. Schindler, a collaborator of Frank Lloyd Wright and Richard Neutra, worked and lived in the house until his death in 1953.

Frank Gehry was among several peers on a blue-chip jury that judged concepts from 21 architects worldwide for developing land at 825 N. Kings Rd., adjacent to the Schindler site. Ideas came in from the likes of Zaha Hadid of London, known for her deconstructionist buildings; Michael Rotondi, who headed the Southern California Institute of Architecture for 10 years, and renowned French architects Odile Decq and Benoit Cornette.

The unique demonstration of contemporary, avant-garde architecture, called “Architectural Resistance: A Tribute to Preserving Schindler’s Paradise,” was held in August 2003 and orchestrated by the Vienna-based foundation that operates the Schindler House. Ideas included:

• “Schindler on the Roof” – This concept by Coop Himmelb(lau), a cooperative architectural design firm in Vienna, called for raising the Schindler House on a platform above the rooflines of neighboring buildings to protect it from future development, preserving its integrity by establishing a completely new horizon.

• Condo Tower – With 21 condos, the tall, lean 21-story tower would create much-needed space around the Schindler House (provided that the neighborhood’s four story, or 45-foot, height limit could be eased somewhat). The concept was submitted by Zaha Hadid, a Pritzker Architecture Prize winner who is the first woman to design a major American art museum – the Contemporary Art Center in Cincinnati;

• “Convertible Concept” – This idea called for enclosing the proposed condos in a convertible membrane structure designed to resemble nearby foothills so that “topography becomes construction” to create another natural, Schindler-like habitat. The submittal came from Bernhard Sommer and Goga S. Nawara, co-founders of exikon arc, Vienna; and

• “Schindler Gallery & Gardens” – This presentation envisioned creating a “building as landscape” that would be a new interpretation of Schindler’s roof planes and striated walls. It would have an open-air auditorium for lectures and small concerts, and also house a certain number of condos. This submission was by Eisenman Architects, led by Peter Eisenman, the Yale University professor known for his high modernist or deconstructive designs. 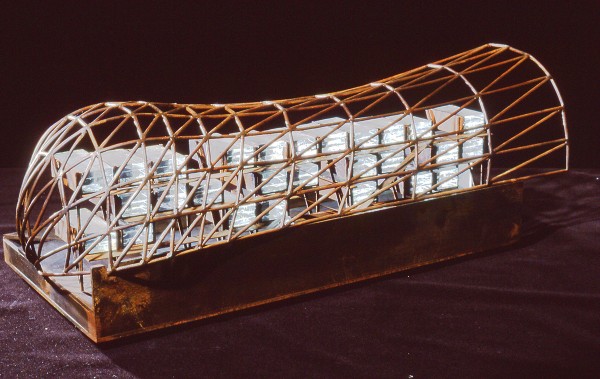 “There’s no doubt the Schindler House is one of the most important buildings of the 20th century,” Peter Noever, artistic director and chief executive officer of the MAK Center for Art and Architecture in Vienna, told The New York Times. “And since so much of its success is based on the relationship between the building and the site, preserving the integrity of the site is quite urgent.”

The debate that followed raised a number of tricky questions about preservation, including how to protect L.A.’s landmark single-family homes in an age of rising density and the range of responsibilities new buildings owe their neighbors, Los Angeles Times architecture critic Christopher Hawthorne noted at the time.

He wanted the concepts to open a public debate about architecture and social value that he hoped would nudge the developer toward an “idealistic” project instead of the more “realistic” condos planned. But hope was the only card in the MAK Center’s hand since it didn’t own the site. The developer – Richard Loring of the Habitat Group, Los Angeles – chose none of the above or any other idea generated by the novel solicitation. 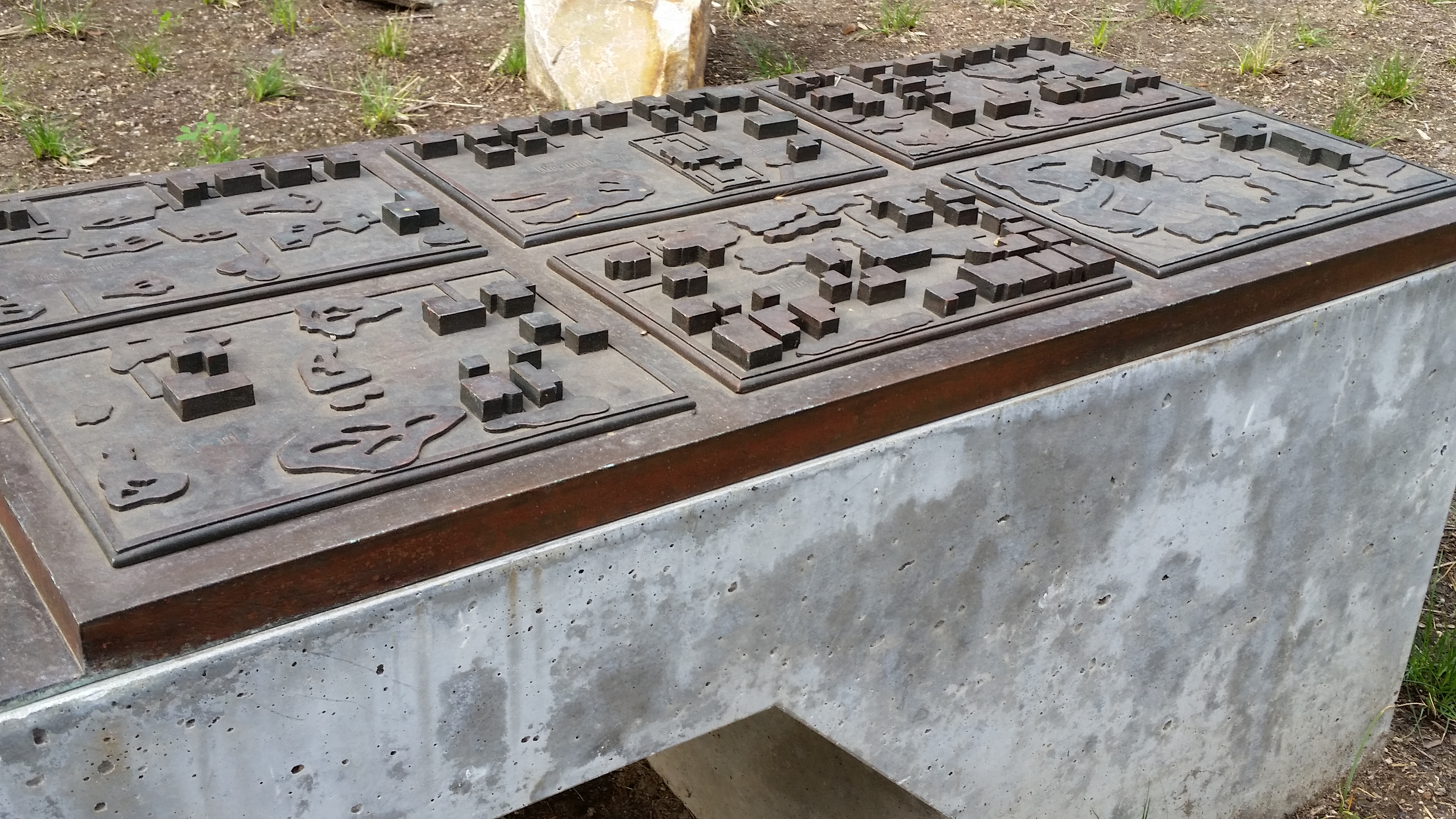 Loring proceeded with a neighborly design from Culver City architect Lorcan O’Herlihy, known for sensitive, modernist designs that followed in the tradition of Schindler and Richard Neutra. Habitat 825, as the completed condos are called today, respected the integrity of the Schindler House next door and, in fact, can’t even be seen from its famous neighbor’s site.

This episode in the history of North Kings Road bubbled to the surface recently when new landscaping for the Habitat 825 condos’ park-like front entrance was completed. The yard work improved sightlines and accessibility to a pair of cast bronze sculptures by Los Angeles artist John O’Brien that together depict the progression of development along the street from standalone residences to high-rise apartments and condos. The condos replaced a large, single-family home built in 1936 that preservationists tried to save.

The artist used aerial photographs with the 825 address as their center to cast one plaque that shows a sparsely populated street as it appeared in 1929, and another as the road looked in 2008 – a unique visual down load of the street’s history.

The issue of how to preserve the delicate relationship between the Schindler House and its surroundings isn’t going away. That fact was recognized in the mid-1980s when there was talk of selling the property at 835 N. Kings Rd. and rebuilding the iconic home in the desert because its West Hollywood neighborhood had changed profoundly since Schindler built his house in 1922.

During a restoration project, some members of Friends of the Schindler House, its owner, advocated that the property should be sold and the house rebuilt in the desert because of drastic changes in its context.

The primary proponent of relocating the house was Gregory Ain, a Los Angeles architect who was inspired to enter the profession after visiting the Schindler House as a teenager. His primary influences were Rudolph Schindler and Richard Neutra.

The iconic studio and residence has had to contend with zoning changes in the mid-1960s that allowed four-story condo and apartment buildings, paving the way for North Kings Road to become the highest-density neighborhood in West Hollywood. That’s a seismic change from the estate-size, single-family lots that dominated the street when Schindler built his iconic house.

It has been listed in the National Register of Historic Places since 1971; a survey of experts by the Los Angeles Times in 2008 named the Austrian-born architect’s studio-residence “one of the best houses of all time.”

By the end of this year, the Schindler House will be one of only two single-family homes left on the street, making it more of an oddity by lacking “architectural companionship.” The other remaining house will be the international-style Rootenberg-Markham house at 902 N. Kings Road. Three single-family homes are scheduled for demolition later this year to make way for a 30-unit condo project and 25-unit apartment building.

Nor is there any land left to establish even the smallest protective zone around the Schindler property.

The Coachella Valley would have many advantages if the Schindler House should be relocated there. The desert community is a haven for modernist architecture, as highlighted by an American Institute of Architects (AIA) annual celebration of modernist residences in the Palm Springs area. Called “Modernism Week,” the event drew 40,000 residents and visitors alike in 2013.  This year Modernism Week in Palm Springs begins Thursday and runs through Feb. 21.

Much of the week focused on the growing role of modernist houses as museums and keeping the visions of their architects alive for future generations. Schindler’s house certainly would have plenty of company nearby, plus the space it needs to be fully protected from urban encroachment.

The Austrian-born architect certainly wasn’t a stranger to the area, having designed the first modern building in the desert: a cabin for Paul and Betty Popenoe in Coachella built in 1922. He also designed the Maryon Toole house in Palm Desert, which was built in 1947.

Another consideration involved in relocating the house is whether the desert area could support the many exhibitions held there year-round. Revenue from the public events help underwrite operation and maintenance costs. Such programming enlivens the space in ways that reflect how life was when the Schindlers were there, a MAK Center director told a Modernism Week conference, which reinforces its current day significance on North Kings Road.

“historic” actually has a very interesting “definition” in the city of weho. UNTOUCHABLE if HISTORIC and no big builder wants the site. “old, dilapidated, not-a-classic, gathering for homeless or crime” if a Mega Builder wants the site. Just look at Santa Monica/Doheney Project. I think the art deco building would be a true classic example of a gone era of architecture. Weho (when last heard) plans to allow demolition for MAJOR mixed use project at our gateway entrance from BH. Just saying. I do, and have repeatedly suggested in the past, if there is going to be a demolition of… Read more »

Part of the context of the Schindler house is the land and the landscape. Admittedly there are some rather interesting ideas out there but these ideas seem more about enhancing or exploiting opportunities for development rather than preservation.

Everyone has missed the simple, eloquent fact that Schindler’s architecture and this house in particular, became the model for California architecture in its simplicity offering an opportunity to enjoy nature and the climate. The obliteration of the neighborhood and current ideas of moving the house would never get traction in his home country or any other place.

The Schindler House should be maintained to the utmost and remain in place as a clear example of his philosophy and how planning concepts in the surrounding community can run amok in the hands of the uninformed.

Cockamamie ideas……Just leave the house where it has always been.

But here’s a genius idea…..How about cutting down all that awful bamboo that prevents anyone from even seeing the house from the sidewalk……and you’d think that with all the money out there, someone would pay to refresh and rehabilitate the house.

I’ve been inside the Shindler house many times, just trying to envision what it was like when new or understand it’s importance. But it has been allowed to deterierate to such a state that it’s impossible for most people to appreciate or understand it’s place in architectural history.