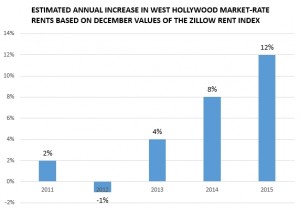 West Hollywood’s 12% increase in 2015 was not unusual when compared to nearby cities and neighborhoods. The Zillow Rent Index suggests that market-rate rents rose 14% in Beverly Hills and 16% in Santa Monica from December 2014, to December 2015. Rents in Los Angeles as a whole grew only 7%, but rents in the nearby Los Angeles neighborhoods grew faster. For example, Hollywood’s rents were estimated to grow at the same 12% rate as West Hollywood. 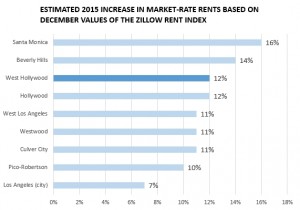 Market-rate rents for older, rent-stabilized housing also rose significantly in recent years. The average rent for new tenants increased by 6% or 7% per year in 2012, 2013 and 2014 (according to WeHo By the Numbers’ analysis of data from the city’s annual housing reports). The numbers for 2015 are not available yet.

Rent stabilization in West Hollywood limits rent increases for existing tenants. It applies only to units that were built and certified for occupancy before July, 1979. Many single-family homes and condominiums and some other units are exempted. Landlords of rent-stabilized units are free to reset rents between tenants, so initial rents for new tenants are market-rate. Those initial rents are reported to the city. The City Council passed a resolution earlier this year asking staffers to draft a provision that will make new housing units offered for rent or sale subject to the city’s rent stabilization ordinance if they are replacing rent-stabilized units that were demolished. 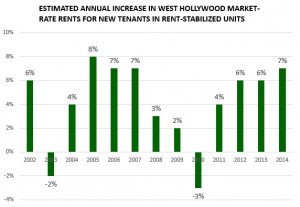 The average market-rate rent for rent-stabilized housing grew 70% from 2001 to 2014. That works out to an average increase of 4% a year, compounded over 13 years. Over the last decade, those rents rose 58%, which is an average of 5% a year.

For more information, please see the Weho by the Numbers article ”How much have West Hollywood market-rate rents gone up?”

Just stopped by and read the comments, I’m a Single, over 40, Lesbian of Color and have lived in WEHO on and off for the last 10 years. I’d like to move back, but decided to go back to school and get a Ph.D. Yet, I’m having a hard time navigating the rental market and feel this summer particularly I’ve watched rents increase more like 30%. I like living in WEHO because it is a Gay incorporated city and I feel safest there compared to other cities, but find when I show up for open houses the majority of other… Read more »

@ Don: The state did not stop rent “stabilization” but rent “control”. Back in the 1990’s, I think, the State Supreme Court ruled that “control” was un-constitutional. Rent stabilization only applies to older units built before the mid-70’s I think. I live in a rent stabilized unit have seen my rent increase from 1,000.00 per month, in 2004, to 1350.00 per month as of now. The units that are vacated are free to go at market rate but the annual rent increase is still controlled by the city. During rent control the rate for a newly vacated unit was regulated… Read more »

To the point of the previous commentators, don poses the arguement and urge the council to do, but dan is accurate, andtge councils allowed the ellis to cary through out most gentried amd desirable community, and Larry is absolutely right. I would not be here In West Hollywood had I not secured a vacant unit of 2 months because the previous resident moved out of state in a family emergency and I knew about the property landlord from a resident who called me from out of state based on a craigslist ad I posted by chance and someone saw it.… Read more »

Rental increase are directly related to supply and demand. The financial crisis has made it more difficult to purchase a home. Today’s requirements are bigger down payments and less interest free loans. Previous potential buyers are now forced into the rental market. The supply is limited and with more buyers prices edge up. In addition the financial crisis caused a slowdown in new rentals coming on the market while at the same time the demand for housing has increased. My friends in rent stabilized units would be forced out of the city if there was no rent stabilization. We need… Read more »

Well if landlords can get these ever rising rental costs from eager tenants, good for them. The fact is that if the rental cost is extravagant, nobody is going to be a long term renter in the same place and landlords will have to keep a revolving door of tenants, and there will have to be periods in between renters when an apartment sits vacant. I honestly don’t know which is better for business because I’ve never been a landlord, keeping good tenants for a long period of time while not hiking the rent as much as possible year after… Read more »

Interesting stats! I think the reasons for these rising prices are not local or regional, probably not even just national. Many cities all over the world are experiencing the influx of money due to governments all over the world having low (or negative) interest rates and/or printing money like there is no tomorrow. All these trillions have to be parked somewhere eventually.

landlords of rent-stabilized units are free to reset rents between tenents?.i was not aware that when a landlord has ellis acted a rental building………i.e. taken it off the market for specified years……….that individual units were still available to rent………..ellising a building is just that. a building ,not of chopping it up to individual units.

1979 was a long time ago. 37 years. Between the City Council approving plans for new buildings that tear down rent stabilized units and just the age of a lot of our older buildings, there is going to be a decrease in rent stabilized units over time. I live in a building built in 1954. I think it is time our City revisit our Rent Stabilization Ordinance and update it (and add some teeth to them to punish the renegade landlords who ignore the laws no matter what).

I do believe this increase is directly connected to Costa-Hawkkins, the cherry on the dreaded Ellis Act cake of destruction.

It’s a problem that has changed and is still changing our community, our town, our village. Since the State stopped RENT STABILIZATION (rent control), landlords are able to gouge renters. The City should ally themselves with other similar cities and advance a bill to restore the capability of local governments to manage (not necessarily limit) rental increases and rates.