Among West Hollywood’s residential streets, Gardner, Cynthia, and Laurel had the heaviest traffic, while Vista, Hayworth, Hacienda, and West Knoll had the fastest traffic. That’s according to 2014 data from the city’s website.

Twenty-two of the 131 street segments had 85th percentile speeds above 25 miles per hour, which is the speed limit on most residential streets. Vista, Hayworth, Hacienda, West Knoll, Hancock, Larrabee, Olive, Sweetzer, Ashcroft, De Longpre, and Fuller had speeds between 27 and 32 miles per hour. 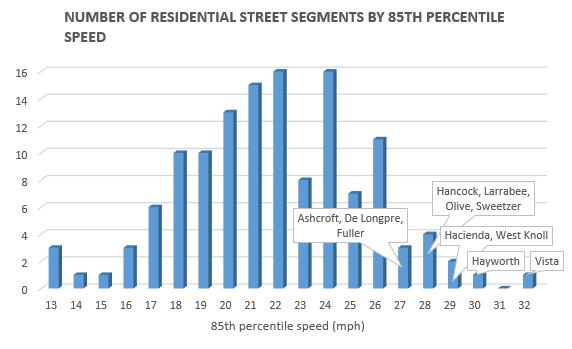 The traffic volumes on residential streets ranged from less than 500 to greater than 7,000 vehicles per day. The top streets were Gardner, Cynthia, Laurel, Willoughby, Phyllis, Vista, Sweetzer, Rosewood and Palm. They all had more than 4,000 vehicles per day. Two streets — Vista south of Santa Monica Boulevard and Sweetzer north of Santa Monica — were near the top for both speed and volume. 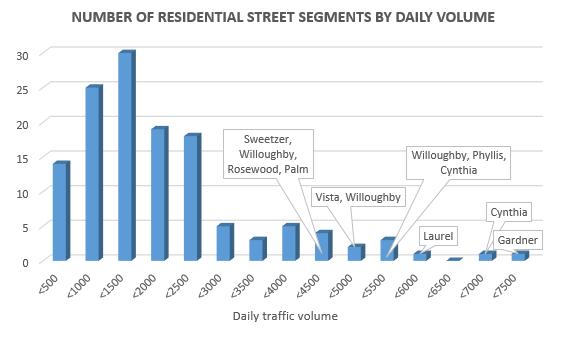 Please see the Weho by the Numbers article ”Updated: Which residential streets have the highest speeds and most traffic?” for the data on all 72 streets in West Hollywood.

John Krasinksi/Emily Blunt lives on Cynthia near Doheny. Faye Dunaway apparently had a place. There’s an US Olympic swimmer. SOmetimes they cut down Cynthia to talk about the Monroe/Sinatra bldg on the corner of Doheny. The Le Montrose Suites before it was upgraded was a huge rock and roll star residence (Jim Morrison supposedly for one).

Chris, what is interesting? I’ve lived in the Larrabee/Cynthia/Palm area for 10 years and have no idea. I would like to know. I’m not referring to CityLine buses, but the Hollywood tour buses which are only cutting through.

Wesley – as someone who lives a block from Cynthia, I know actually there are some interesting sights. But also some buses pickup and drop off at residential street hotels, and also they sometimes use them as other drivers do as short cuts.

This is a good article though the details are certainly not surprising. Those of us who live on Cynthia/Palm/Larrabee know all too well about the heavy traffic. Almost all of it is coming from eastbound Sunset down Doheny and east on Cynthia to Palm where it backs up. Where are they going: Fountain, Sunset? If they stayed on Sunset and that street were allowed to flow like the main artery street it is then most of the traffic would stay off the small streets which are not designed to have this heavy load. Of course, this is happening all over… Read more »

Casey – see ,my post above – that’s the section of Phyllis west of Doheny a half block south of the one way street you are referring to, which has light traffic.

There has to be a flaw in at least some of this data. How can Phyllis Ave, a one way street 600ft long, have over 5500 trips a day? I live next door to that street and it’s impossible.

Excellent report, and thx for posting it. A suggestion though – it smartly divides some streets into sections to indicate massive differences. For example, the article lists Phyllis as one of the heaviest. That’s true – for the section west of Doheny, used as a cutoff from Sunset coming out of Beverly Hills, that’s true. But the street has may be houses on it. The main section of Phyllis, between Doheny and Hammond, as its residents know, has very low traffic. The already excellent article would be improved by amending it in this and other cases to clarify things. (Cynthia… Read more »

What about Fountain? Fairfax? Crescent Heights? Aren’t they residential streets?

Olive Dr.has had the LASO stationed on the street in the AM and sometimes tickets are issued while other times it appears only warnings are given. But when the Sheriffs are no longer there it becomes a freeway again with cars exceeding the speed limit by well over 25mph. We can’t get speed bumps or other traffic mitigation measures because Olive Dr. provides relief to those traveling westbound on Fountain Ave. wishing to continue westbound on Santa Monica Bl. which would otherwise have to continue to La Cienega to reach Santa Monica Bl. Unlike most residential streets in West Hollywood,… Read more »

Any stats from previous years we can compare this data with?

WESTBOURNE DRIVE, from Santa Monica Blvd to Melrose, HAS to be among the fastest residential traffic. People SPEED south and north, ignore stop signs. Fortunately there are few children living in this area or they would be in danger. We need something to get people to drive sanely…or I guess we’ll wait for auto crashes, deaths or worse to address the issue.