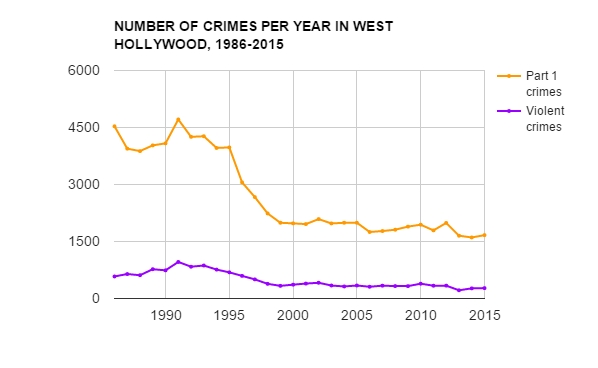 EDITOR’S NOTE: This is the first in a series of weekly posts of data and facts about West Hollywood compiled by David Warren. Warren is a 15-year resident of West Hollywood and current chairman of the city’s Transportation Commission. He is Harvard- and Wharton-educated with an MBA in finance and statistics. As the son of a town manager, he has always been interested in local government. He advised city and state governments earlier in his career. Like many residents, David first got involved in West Hollywood community issues because of a proposed development near his home. He started gathering and crunching numbers to understand the city government’s work. Last year, he founded WeHo by the Numbers, hoping that its just-the-facts content would be helpful to other community members. David is married, with one dog.

WEHOville recently reported that crime in West Hollywood fell 12% in December versus the same month in 2014. In September, crime rose 40% versus a year earlier. This volatility makes it hard to see trends in monthly data, but they can be seen in the full-year crime numbers.

The short-term crime trend is up. Part 1 crime was 4% higher in 2015 than 2014, based on the sheriff’s reports to the city. A jump in reported petty thefts drove most of the increase. 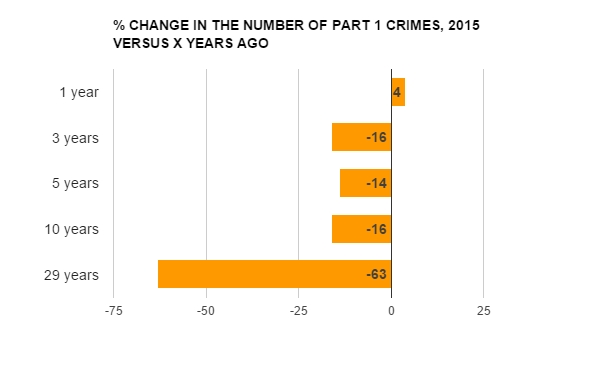 In the long term, West Hollywood crime has trended down. Part 1 crime fell roughly 15% over 3-, 5-, and 10-year periods. It declined 63% over the 29 years of data available from the California Attorney General. In other words, crime has dropped almost two-thirds since the city’s early years. Crime in 2015 was among the lowest in the city’s history. 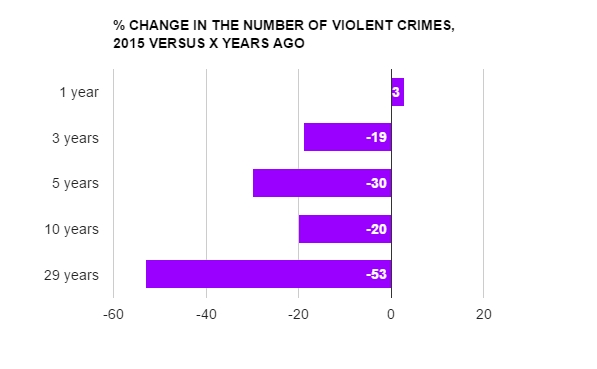 For more information, please see the related article at WeHo by the Numbers: Updated: How did crime in 2015 compare to the past?.

David Warren, the founder of WeHo by the Numbers, is a West Hollywood resident who explores community issues and the City government’s work through numbers. He welcomes suggestions and corrections at WeHoByTheNumbers.com.

So, I personally witnessed an armed robbery and assault in front of 1250 N. Kings Rd. last month. The victim was hunched over in pain having been thrown to the sidewalk and having a gun stuck in his face. The Sheriffs arrived after the robbers got away with an iPhone and took a statement while the paramedics placed him in a gurney and took him to Cedars. The catch is, the Sheriff didn’t call this an assault or mugging or violent crime. They reported it as simple robbery (not armed) the last I heard. If that’s the case, these statistics… Read more »

oh, i feel completely safe now. you know that these numbers are about as suspicious as when the los angeles police department, charlie bleck & the mayor were busted for presenting falsified crime statistics a year and a half ago.

I can tell you for sure, that petty crime is way up right now, and I do not see this reflected here. Robberies and thefts were rampant last year.

There is no urban City of any size that has no violent crime. This is what I am talking about, Don Azars. Every personal attack was blown out of proportion so it seemed crime was increasing at an alarming rate. It wasn’t. I put part of the blame on this publication. How many articles had a picture of the man who was killed jaywalking across the street? How many about the man who was mugged and severely injured? Those incidents only required one article each, but there were many with their pictures. Blown out of proportion.

Thx for this. It is great the WeHoVille publcizes some of the worst violent crimes. But residents should realize that greater coverage does not equal increased crime. This report reflects what I’ve sensed as a 16 year resident – this is an extremely safe urban environment.

Funny, I felt safer in the early years of the City. Maybe I should stop reading so much.

These numbers are suspicious as the number of personal attacks seemed to increase last year. The need for more ON STREET police presence is needed it would seem..yet such statistics don’t reflect that need. There should be NO (or very very low) amount of violent crimes in our City.