A man accused in a violent month-long crime spree, including the shooting of a food delivery person in West Hollywood, had outstanding warrants in two attempted murder cases, a district attorney’s spokeswoman said today.

No new charges have yet been filed against 32-year-old Artyom Gasparyan, D.A.’s spokeswoman Jane Robison said. He remains hospitalized and in police custody, and Robison said she did not know when he would be formally charged and arraigned. 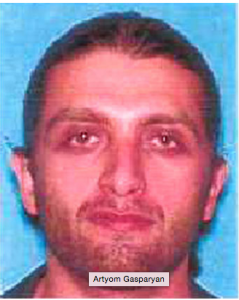 Gasparyan, also known as Artur Melkonian, was originally reported in critical condition after he was shot by Los Angeles police on Jan. 4.

He was already facing two counts of attempted murder and one count each of assault with a semiautomatic firearm and assault with a deadly weapon for allegedly shooting Dimitriy Li on Dec. 13 and trying to kill Emily Jimenez with a knife last Aug. 5.

According to the criminal complaints, Gasparyan was convicted of burglary in 2005 and of stalking in 2010.

“He’s been involved in several carjackings, several armed robberies, at least one homicide, at least four attempted homicides and is a very, very dangerous individual,” Beck said of Gasparyan. “I have had well over a hundred detectives and several hundred line officers assigned specifically to capture him over the past week.”

When officers spotted him at an auto-body shop in the Sunland area on Jan. 4, a chase ensued, ending with the crash on the northbound 5 Freeway near Glenoaks Boulevard in the Sylmar area.

The suspect jumped out of his car and tried to run, but was wounded by officers. It was not disclosed whether the suspect was armed or fired at officers.

Paramedics treated several people — including children — who were in the vehicle that was struck by the suspect.

Gasparyan was tied to another police pursuit that began on New Year’s Day near the Harbor Gateway area and ended when a second suspect, Daniel Ramirez, shot himself in the head at a Long Beach home in the 3300 block of Daisy Avenue after shooting two men and stabbing another. Ramirez, who died of his wounds, was identified by police as a Gasparyan accomplice.

The New Year’s Day pursuit through the Carson area began when Gasparyan and Ramirez allegedly stole a Volkswagen Passat. During the chase, police said one of the suspects fired at the occupants of an orange Dodge Durango that pulled over when the driver heard the patrol car’s sirens. They were not injured.

Ramirez eventually ran into the house on Daisy Avenue, where he allegedly fought with a man inside the house and stabbed him in the face with a knife from the kitchen. The man and a younger son, who suffered injuries to his hands, were able to flee.

Ramirez allegedly held the remaining two sons in the house as hostages, eventually shooting them both, police said. Both survived. As police approached the home, Ramirez shot himself in the head, authorities said.

Police said Gasparyan’s alleged crimes also include a Dec. 9 shooting in Burbank, where a 67-year-old man was shot multiple times at his home and a 33-year-old gardener was wounded. On Dec. 29 Gasparyan is alleged to have been involved in the shooting of a man delivering food for Bossa Nova restaurant in front of a condo building at 1025 N. Kings Rd. The man’s credit card processing machine and cell phone were stolen.

On Dec. 30, Gasparyan allegedly was involved in the shooting death of a 37-year-old man near Van Nuys Boulevard and Plummer Street that was initially reported as a road rage incident. Officers found the victim lying near a car and took him to a hospital, where he was pronounced dead.

Police also believe Gasparyan is linked to shootings in the Panorama City area on Dec. 30 that left three people wounded.