CORRECTION:  An earlier version of this story said that Micky’s would be closed through all of October, including Halloween.  In fact, Micky’s will be closed for 30 days beginning Oct. 1 and will be open for Halloween on Oct. 31.  The story has been changed to correct the error.

Micky’s, one of West Hollywood’s most popular gay bars, will be closed by the state Board of Alcoholic Beverage Control (ABC) for the 30 days beginning  Oct. 1. 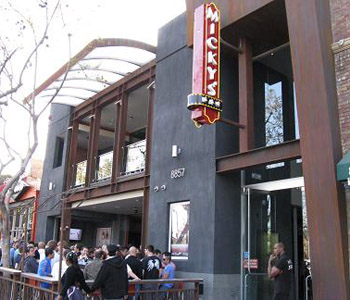 The closing is a penalty levied by the ABC board against Micky’s after an investigation in 2013 of charges of lewd conduct and giving away alcoholic beverages for free. The lewd conduct charges had to do with alleged contact between bar patrons and Micky’s go-go dancers, as well as go-go dancer “over-exposure.”

The closing extends until just before Halloween, when West Hollywood’s Carnaval attracts hundreds of thousands of people to the gay nightlife district on Santa Monica Boulevard where Micky’s is located. Owners of nearby businesses have expressed concern about the impact of the closing on them because Micky’s draws a large audience that also wanders in and out of other local bars and restaurants and shops.

Michael Niemeyer, the owner of Micky’s, said he was concerned about the impact of the one-month closing on Micky’s 50 employees. “The main reason I fought it,” Niemeyer said of the ABC charges, “was there were 50 people caught in the crossfire.”

“We are making attempts to mitigate the impact of this on our employees,” he said.

Niemeyer said WHBT Inc., his company and the owner of Micky’s, is in good financial shape and that Micky’s will be back in business in November.

The ABC investigation of Micky’s in 2013 and its decision in December of that year to close Here Lounge for a month on similar charges sparked outrage in West Hollywood’s gay community. Many people argued that the laws the ABC board was enforcing were out of date, noting for some were enacted more than four decades ago and don’t reflect the mores of today.

Niemeyer has owned Micky’s since 1988. It is believed to be the second liquor-licensed establishment after Prohibition and started becoming a gay hangout in the Fifties. Micky’s was closed for almost two years after an electrical fire in 2007.

Kabi,I never said it was in the sixty’s

finei, I stand corrected, it was DC who said something about the 60’s, my deepest apologies!

This prudishness is absurd. It’s sad how some conservative folks don’t like government overreach unless it involves nudity.

James, please don’t be insulting. If you don’t think that dancing in these bars is a real job, then you try doing it for a night or two as your means of income.

The bar owners in West Hollywood should be collectively pushing for a change in the laws regarding the dancers because they have the resources to do so and it would only increase their earnings if they can get away with more. There is no downside. Unless they are willing to do so, I can’t feel sorry for them, and in fact I blame them for accepting this sort of restriction on their employees.

I don’t know who is to blame, but with the sad loss of Mary Ann running Micky’s for so many years …. I’d look to the new management?

As neither a fan, nor a patron of Mickey’s, I can’t comment much on the specific goings on there, I am forced to wonder whether the ABC maintains such scrutiny on the various gentlemen’s clubs that dot Southern California’s landscape. If enforcement is evenhanded, then Mickey’s should just suck it up, and behave like the excellent employers they wish to be seen as, and cover the lost wages of their staff (except for the errant go-go boy, and the staff member who was supposed to, but didn’t, supervise him). It does seem a strange set of priorities for regulatory law… Read more »

Here are some facts: 1. A go-go dancer exposed himself to a customer in the presence of an ABC undercover agent in 2013. 2. The dancer was cited. 3. The club was cited and there was no option for a fine. The citation was fought through all available legal means up for the last couple of years up to and inclusive of an appellate court, which flat out denied the appeal. A 30-day closure was the ONLY option, if you can call it an option. 4. Only two GAY-OWNED and operated bars in the city were cited during this period… Read more »

Bills it Dan, the bars were reported due to rivalry, and they had started to go too far at Mickeys, I witnessed it first hand. You want full on nudity, go to a bathhouse.

Why do people feel bad for the go-go boys losing money?! How about they get a real job? One that involves more than waking up at noon and drinking/dancing on a box? And the “hosts”?! Ha! They could get real jobs too. If you’re relying on dancing on a box for your rent money, you already have problems- maybe the closing will force you to get a real job.

Why the Alcoholic Beverage Control is in charge of what they call “Public Welfare and Moral” law is beyond me. The “nude performers” clause was created and last updated in 1970 if I’m reading it correctly. And it primarily makes reference to women’s anatomy with detailed descriptions. Men seem to be generalized by just “genitals”. The 60s/70s was when strip bars were really popular…and understandably…they were probably trying to protect the women from the culture of drunk heterosexual men and the sexual revolution. Someone should really challenge this law and make efforts to update it. In my opinion, the “performer… Read more »

Jim – I suspect the common sense reason is that combining heavy alcohol consumption with the extra attraction (arousal) of nudity leading to more crowd control problems.

They don’t perform lap dances at Mickey’s but at straight bars they do. What’s the difference?

why is nudity offensive? it should not be illegal. the ABC should enforce laws pertaining to the distribution of alcoholic beverages. what a dancer is wearing is irrelevant.