While reported hate crimes in Los Angeles County increased by one percent in 2014 from the previous year, crimes targeting gay men increased by 31 percent from 70 to 108 incidents. Anti-transgender hate crime continued to be the most violent of any major targeted group, with 93 percent of such crimes being of a violent nature.

Those figures come from the annual report of the county Commission on Human Relations, which said the overall increase in hate crimes was the second-lowest total in 25 years. 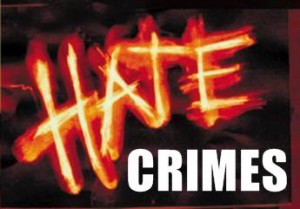 According to the report — which defines a hate crime as one in which hatred or prejudice toward a victim’s race or ethnicity, religion, disability, gender or sexual orientation is a substantial factor — there were 389 reported hate crimes countywide last year, an increase of five cases from 2013, which had the lowest reported cases in 25 years. Although there was an increase in anti-LGBT and anti-Jewish hate crime, the report notes the increase followed dramatic drops the previous year for those groups.

Similar to past years, four groups represented the bulk of victims of hate crimes, with 86 percent of them being either black, lesbian women/gay men, Jewish or Latino. Two groups documented in the report saw dramatic increases: the 31 percent increase in crimes targeting gay men and anti-Jewish crimes, which rose 31 percent from 42 in 2013 to 55 last year.

“It is disturbing that the trend of declining anti-Jewish hate crimes reversed itself this past year, both around the country and in LA County,” said Amanda Susskind, the Pacific Southwest regional director of the Anti-Defamation League. “As we see across the country, some of this increase was due to the spate of hate crimes during the conflict between Hamas and Israel during the summer of 2014.”

The peak of hate crimes reported in the county was in 2001, when the post September 11th period led to anti-Muslim/Middle Easterner hate crimes, which boosted the county total to its zenith: 1,031 hate crimes.

“We are encouraged that reported hate crimes have declined dramatically over the years,” said Robin Toma, the commission’s executive director. “However, an average of more than one hate crime occurs every day, so we cannot be complacent. Of particular concern is the continued high rate of victimization of African-Americans who comprise two-thirds of racial hate crime victims.”

Further, the rate of violent crimes rose slightly to 62 percent from 60 in 2013. For the second consecutive time in 10 years, there were no murders. However, the report lists one hate-motivated attempted murder involving a white male victim. Aggravated assaults — which include assaults with deadly weapons and physical attacks causing greater bodily injury — increased 16 percent.

The analysis also revealed that blacks represented 69 percent of all victims in reported racial hate crime in 2014, despite comprising only about eight percent of the county’s residents.

“Hate crime is not just a law enforcement matter,” L.A. County Sheriff Jim McDonnell said. “The decrease in hate crimes over the past seven years is the result of a community-wide effort.”

Officials said that while the number of social media-related hate crimes remained low, there remains the problem of racial hate speech on the Internet. The highest rate of hate crimes took place in the metro region, which stretches from West Hollywood to Boyle Heights, followed by the San Fernando Valley. The San Gabriel Valley region had the lowest rate of hate crimes. The commission’s report was generated from data collected from sheriff and city police departments, school districts and community groups.

Is this going to get blamed on “hip-hop” club nights, too, or have we moved past that?

The Metro region starts with us? What about Beverly Hills, Century City, WLa? We all all interconnected and all part of LA County.