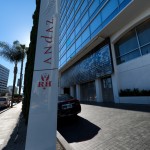 A guest at the Andaz hotel on Sunset Boulevard was accidentally shot by a friend in his hotel room last night.

Sheriff’s Deputy Trina Schrader said the guest was a jeweler who legally possessed a handgun. While he was showing his friends his collection of jewelry, one of them, Daniel Dixon, 30, accidentally pulled the trigger on the gun.

Dixon was arrested on suspicion of discharging a handgun in a negligent manner, with his bail set at $35,000.

The man who was shot, who has not been identified, was transported to Cedars-Sinai Medical Center, where he is in stable condition.

OK, Suge Knight was shot at a nightclub. That’s one.

Jonathan – it would be a list way below the national (or LA city) list. It’s very rare – rare enough to rank a story on WeHoVille. We know the horrible Palm apt story last year, but can anyone cite another? I’m sure there have been (including suicide, one of the most frequent times people are shot), but I can’t recall another.

How the hell do you discharge a hand gun accidentally?

I feel like we should keep a running toll board of people shot in West Hollywood. Should be live/online since the number seems to go up so often.