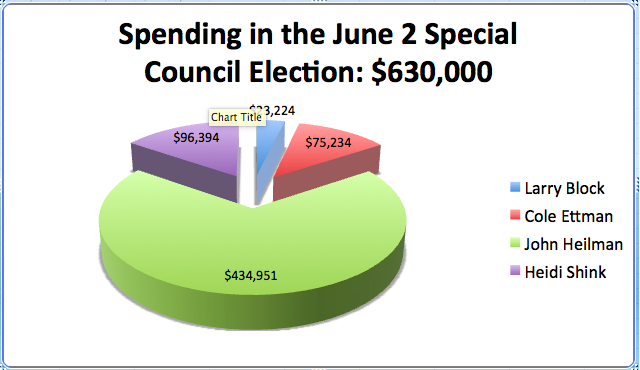 It’s not just housing that’s expensive in WeHo. The City Council seat that was up for election in June cost John Heilman and his supporters $435,000, almost enough to buy a one-bedroom condo in West Hollywood.

The latest round of campaign expenditure reports recently released by the City Clerk shows a total of $630,000 was spent by the four candidates and two independent expenditure committees in the race to fill the seat vacated by Jeffrey Prang. The reports show total expenditures through June 30.

The June special election surprised many observers with its 20 percent turnout, equal to the turnout in the March general election. But each of those votes was costly. For example, each of John Heilman’s 2,315 votes cost his campaign and the two independent committees backing him $188. Each of Cole Ettman’s 486 votes cost $155. Heidi Shink’s campaign spent $69 for each of her 1,403 votes, and Larry Block’s campaign spent $30 for each of his 763 votes.

The candidates themselves had some skin in the game, with each making a loan to himself or herself. By that measure, Cole Ettman’s campaign was the most expensive, costing him personally $103 a vote because of the $50,000 he loaned his campaign. Larry Block’s $20,000 loan means he personally spent $26 a vote. Heidi Shink’s $24,100 loan means each of her votes cost her $17. John Heilman loaned his campaign $10,100, or $4 a vote.

seems like a lot of money for a non (nominal) salary position? must have awesome benefits?

In an ideal world, one voter = one doner ONLY. And there are donor limits per candidate to equalize them. (ie $100 max each voter per candidate) No businesses allowed to donate. (only the business owners as ONE voter with the equal limitation. Each worker in the business is one voter each with the same limit) No PACs or special interest non profits (unless its flow through money from one voter) Until we reform to that ideal, we will have continued and unbalanced financing in elections. WeHo is a progressive city. And small enough. We should lead by example of… Read more »

@all u bitter types: We knew in January there would be an open seat in June. Everyone anticipated the incumbents (JD & JH) would get elected and that the 4th place person would be running in June. Funny the twist of fate that John Heilman was in 4th place by less than 100 votes. So the competitors in June were forced to face a formidable Giant. The other 3 shouted anti-incumbent because that is all they had! The only person who might have run and beat Heilman is Abbe Land. In fact, I hope Abbe will run again! @Woody–the termites… Read more »

what doesn’t make sense to me is why $435,000 was spent to get Heilman (re-)elected. it wasn’t from those who live in rent-stabilized housing, it wasn’t from the west hollywood west neighborhood ass’n residents living in single-family homes, it wasn’t from kings road condo dwellers. it was raised and spent in $10,000 and $15,000 and $20,000 increments by folks like the developer of 8899 Beverly. get real you guys. Woody McBreairty hits the nail on the head. Heilman got tossed in March ‘cuz we had better candidates, and 30 years is too long no matter how much you like someone.… Read more »

Actually, if Block and Ettman had withdrawn and their supporters voted for Shink, she would have won. However, the most serious problem now stems from the SCOTUS Citizens United decision which has opened the floodgates of unfettered money to any candidate. We are looking at an in-progress presidential campaign which will probably cost in excess of ONE BILLION DOLLARS ! ! Also, as the years have progressed, the national campaigns have become longer and longer and longer contributing to voter fatigue. Now, after a November election, the very next day the pundits will speculate who will be the candidates four… Read more »

I would not make this about John Heilman or any other candidate. They all did what they had to do to get elected under the current system of legalized corruption. Do we want our council members bought by out-of-town businesses or elected by residents? Do we want to be a progressive city or not?

Actually, a candidate’s campaign has nothing to do with an I.E. Campaigns have no control over what an ie is doing or spending. These numbers should not be condensed and are incorrect.

The March 2011 election winner results: D’Amico – 2876 Land – 2837 Heilman – 2626 The March 2015 election winner results: D’Amico – 2309 Meister – 2136 Horvath – 2133 If this is a mandate for Heilman, then I am the king of outer space. In fact unless the March 3 final vote tallies are in error, I do believe Heilman LOST the election! So clearly the voters did not concur with the claims of Heilman’s indispensability as asserted here. We are all entitled to our own opinions but not to our own set of facts & statistics, hard as… Read more »

So Woody, where are your ideas and solutions to the complaints you have stated? You’ve apparently been around for a long time, presumably long enough to have met with John Heilman many times to address some of these long held troubling issues but have you ever met with him? If so, could you share the the circumstances and results? How would you describe the actions and philosophy of the Wehona group in the way they presented their previous slate for election while trying to smear Abbe Land, Lindsey Horvath and Fran Soloman as a device against Heilman? Do you subscribe… Read more »

The 2015 current election results for the four open seats between the two elections:

Cease contributions from those not living or owning a business within the zip code and this nonsense goes away. It’s all money with a stake in the outcome of the election.

If John Heilman is considered “first” in so many ways, why did he come in third in the 2011 election, being beat out big time by newcomer John D’Amico & a fellow incumbent? If Heilman was considered so indispensable, why did he lose the March 3 election, even with 30+ years of experience, against 1 candidate with a couple of years experience & another candidate with none? It’s so obvious that the voters want change & are making it where & when it’s reasonably possible. It’s very hard to make legitimate points of truth against those who respond with twisted… Read more »