A 28-year-old man suspected of spray painting disparaging remarks about the state’s new vaccination law on West Hollywood City Hall and other buildings in L.A. County surrendered to police yesterday. 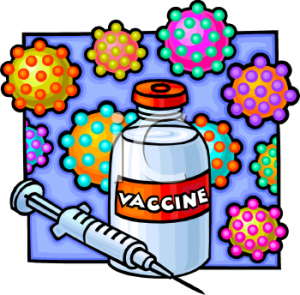 At approximately 3:40 p.m. Wednesday police responded to a call of vandalism at the Beverly Hills Chamber of Commerce and upon their arrival realized that the suspect had already fled the location leaving the anti-SB 277 remark spray-painted on the front of the building, Hoshino said. The remark was ‘4 Every Kid Afflicted, A Public Figure Will Die’.

“During the course of the investigation, it was discovered that the City of West Hollywood City Hall and two locations along the Santa Monica (10) Freeway were also vandalized with similar writings,” he said.

SB 277, signed by Gov. Jerry Brown Tuesday, removes all exemptions to vaccine requirements for school entry, except those medically indicated.

i just think that we should all just settle down and listen to noted medical expert, dr. jenny mc carthy. when she has has her clothes on, and her chunky black frame glasses with no lenses, i believe her. celebrities and actors are experts on these matters and i happily defer to such passionate authority.
anything else would be racism.

I’m not that much younger than DD. Baby boomers generally are very pro-vaccination since it saved us from some diseases and others now covered we suffered. It’s our experience that makes us pro-vaccine and horrified by the anti-science types who want to impose their selfish, ignorant agenda.

This has nothing to do with “generational divide” unless “generational divide” and ‘ignorance’ are synonymous, which they are not. Plenty of older people are informed and well-reasoned enough to understand that public safety will always trump personal choice. You do not have absolute freedom to do whatever you please when someone else’s health or well-being is at stake because of your actions. It has much less to do with “water in the glass” than it has to do with ‘thinking outside the box.’

Andrea- I think this is a generational divide and your see the water in the glass one way and I see it another way. Therefore, I see no point in commenting any more. Peace out !

Again, Dan, you are demonstrating ignorance of basic medical knowledge. So much so that you don’t even realize when you’re making arguments against yourself. Vaccines are not magic. Like everything else in the reality-based medical world, they are not and do not claim to be 100 percent effective. This is the very reason we need everyone vaccinated who medically can be. Then people whose vaccines have not been effective or who are immunocompromised–like the woman in Washington whose death you are trying to justify–needn’t be exposed to measles because people like you never passed freshman biology. Polio and smallpox only… Read more »

Andrea – I just read that the woman in Washington State WAS immunized against measles as a child ! A vital fact you selectively chose to omit. And, yes, her immune system was compromised. I wonder if this immunized woman would have died if she contracted measles the “natural” way, like I did. How many people do you know who got a flu shot and then got the flu? I know quite a few. I have never had a flu shot and in the last few decades only had the flu once (January 1, 2006). I did have a minor… Read more »

I am so proud of Gov Brown & the legislature for enacting this critically important law to protect us all against misinformed selfish parents. They are no different from evolution deniers in their rejection of science.

Yes, by all means, let’s bring back polio and smallpox too. Nothing strengthens the immune system like six months in an iron lung. (Also, I love the comment “I believe they strengthen my immune system.’ Ok, then…. I believe sacrificing goats appeases the god of measles.). And i assume you’ll feel the same way when you get shingles, too. Nothing strengthen an 80-year-old’s immune system like a year of shingles. Not everything is a matter of absolute personal choice. We have speed limits because your stupid-a** choice to endanger your life also endangers everyone else’s. We have drunk-driving and anti-smoking… Read more »

As a child, I had NONE of the childhood illnesses (well, maybe a mild case of measles, my mother didn’t remember) even though I had 2 older siblings. I had all my vaccines. I do not believe it should be up to the parents. I believe children should not be admitted to schools without them. A decision one parent makes could put an entire school’s worth of children at risk.

I do agree about commercials for drugs, especially prescription drugs on TV. They should be banned. Big Pharma has us all by the throat enough.

While I strongly disapprove of Marlon’s actions, I am opposed to the new law. It should be left up to the parents, especially since we are not talking about something like ebola. As a child, I had ALL of the usual illnesses (measles, German measles, chicken pox, mumps, etc.). While it was not pleasant, I believe these strengthened my immune system. Today, we live in a world of fear. The worst example is a Bayer ad on TV which shows a woman and a man in two separate commercials being given a note saying that their heart attack will take… Read more »