With the West Hollywood City Council election now only two days away, those paper mailers are falling like snow (something you can see in Aspen) from residents’ mailboxes.

The more interesting ones include a mailer implying an official Republican Party endorsement of candidate Cole Ettman and another from the Ettman campaign that some recipients have interpreted as a jury service notice.

The Republican mailer, paid for by Ettman’s campaign, includes a quote from Scott Hart, who identifies himself as founder of “Continuing the Republican Revolution.”

“Cole Ettman has shown an ongoing commitment to making West Hollywood a better place to live and work. Cole, a small business owner, is an innovative leader whose experience and integrity deserves the vote of every Republican in West Hollywood,” the mailer says.

WEHOville could not reach Republican Party officials this morning. But Hart’s “Continuing the Republican Revolution” is a Newport Beach political mailer company that has been criticized by party officials for mailers that wrongly imply Republican Party endorsement of candidates and issues. Ettman ran as a Democrat in his 2004 race for a state Senate seat in New York that resulted in his being sued for campaign finance violations. He does not own a small business but rather manages the Beverly Hills office of a law firm.

A recent mailer from candidate Heidi Shink sparked another political brouhaha because of its seeming claim that she was being endorsed by L.A. County Assessor Jeffrey Prang, the former West Hollywood City Council member whose seat is up for election on Tuesday. Prang, who has not endorsed anyone in the Tuesday election, objected that a statement of general support that he made about Shink in March was included in the mailer. 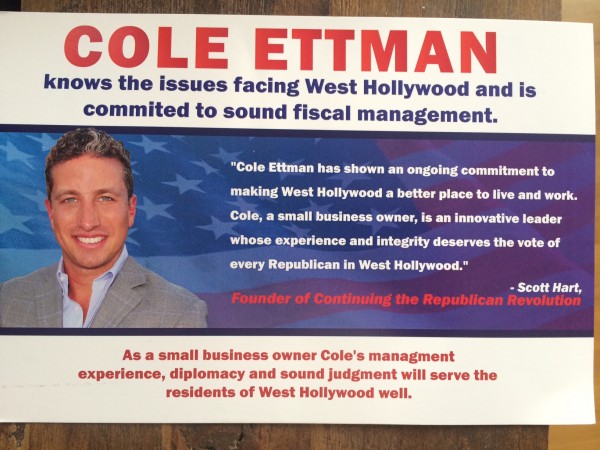 Hi Cole: Your sign planter was busy as ever at 8:00 am planting a multitude of CE signs in front of Block signs across from the voting location @ Crescent Heights & Fountain. Desperate measures lol.

I don’t care about this cher stuff. But I read about the handshake refusal and Larry Blocks involvement and people told me its true he did try to broker peace. At the start of the election I really disliked Larry but after talking to the other three candidates he seems like the most well intentioned of the three. I am probably gonna vote for Larry.

As of election eve over 2000 absentee ballots have been returned to the City Clerk’s office. Close if not over 2100. This campaign, a well funded campaign, an overly funded campaign is irving what we’d like to not believe about politics and votes and that they can be bought. Like Coke or Pepsi a good ad wins. I’ve known John Heilman as long as there has been a City. I’ve been an avid supporter. I walked door to door in 2007 with John for hours (there is no need to knock on every door, its public record who actual voters… Read more »

Guess what Disco? Tomorrow the voters can democratically decide whether they’d like him to serve on the council. If he wins, “blame” the voters, not John Heilman. He was opposed to term limits. He never said that once they passed, he wouldn’t run again. For a few hours, when he still thought he’d prevail in the March election, he made one comment quoted here that he didn’t plan to run in June if he lost. He changed his mind. I and many other WeHo voters are happy he did. Let me ask you – John D’Amico has said on numerous… Read more »

While Ettman’s recent flyer seems to be rather misleading, there are other matters pertaining to his candidacy which give me great pause. But NOT the greatest pause because that is reserved for John Heilman, the candidate who STEADFASTLY said “ELCECTIONS ARE TERM LIMITS” and then goes back on his word NO matter how many people supposedly “begged” him to run again. Heilman, apparently, is a man of NO principle.

Nothing is a desperate as that pot holder though . . .

A lot of the anti-Heilman bloc remembers WeHoNews and its publisher’s open endorsement of and slanting articles to an anti-council stance. I recall when I posted there a number of my comments opposing his views didn’t get published. Now that there is a fair, knowledgeable arbiter/editor reporting the news and informing the readers of facts, they get upset. Shink supporters – point out a single inaccuracy about the reporting on her. Publishing facts isn’t bias – its this site’s duty. Is the site biased against John Duran? If you think it’s biased against Shink and Ettman, by your standards it’s… Read more »

There’s no bias. Wehoville is simply reporting what’s happening. It’s not the fault of the writer where the political blunders are.

Oh, and K.G. This website did make an endorsement. Look at its front page. It has endorsed candidates who don’t lie or break the law.

K.G. This website is biased because it reports documented illegal activities by political candidates and catches them in documented lies? Isn’t that what reporters are supposed to do? Is John Heilman being investigated for illegal campaign activities? Are people saying he is lying about his membership in organizations or involvement in certain public activities? Do tell. I bet wehoville would like to know. Sounds like you and Frank G. are upset because the people you are backing are being called out for lying and breaking the law.

Frank D — you’re not alone in your observations. It’s unsettling and a big turn off when a ‘news’ source seems to take on a political bias but doesn’t come into the sunshine and make an officially endorsement. Lots of newspapers make political endorsements – I’m not a fan of that either but it seems way more worthy of trust and to be taken way more seriously than to be covert and manipulative about it while feigning neutrality and slipping in their bias into practically everything that is written.

I just couldn’t resist this one. All I keep thinking is ‘who the heck is Cole Ettman and when did he suddenly become a multi-faceted advocate for causes in our city. I confess, for the last 15 months, I have been unable to attend Weho City Council meetings because of illness, so I can’t speak about what went on in the meetings that occured during my hospital visits. I did, however, watch many on TV. Prior to this time I was a regular for at least a couple of years. Prior to the active campaign period, Cole Ettman was not… Read more »