West Hollywood residents will have an opportunity next month to offer their opinions on plans to build a network of radio towers to allow first-responders from dozens of agencies to communicate quickly in an emergency. 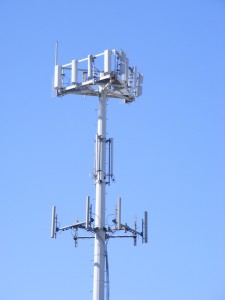 The Los Angeles Regional Interoperable Communications System, or LA-RICS, would replace an existing collection of 40 separate radio and data networks used by police, fire and paramedics to serve 10 million county residents. The theory is that an integrated communication system would allow faster response.

The project recently was downsized from 177 radio towers after homeowners and firefighters voiced concerns about the project’s health and aesthetic effects. The project now calls for 69 fixed radio towers and 15 portable cell towers.

There already is a movement in West Hollywood to oppose construction of such a tower at the Sheriff’s Station at the corner of San Vicente and Santa Monica boulevards. Opponents of the proposed tower met last week at Urth Cafe on Melrose Avenue to discuss ways to protest it.

The objections come despite the fact that radio waves from the towers would be “1,000 times less at ground level than the Federal Communications Commission limit,” which is “less than everyday electronic devices such as a laptop computer, microwave oven, Bluetooth headset — or a baby monitor,” according to a statement from the joint powers authority overseeing the LA-RICS project.

The West Hollywood meeting will be held on June 4 at 6 p.m. in Rooms 5 and 6 of the Community Center at Plummer Park, 7377 Santa Monica Blvd. LA-RICS officials plan to describe the project and give the public time
to comment.

So LeBron James had a tumor where he holds his cell phone? Therefore the cell phone caused the turmo. Wow, Kevin, good logic! How about this: Did you know that over 80% of people involved in automobile accidents had potatoes within 24 hours prior to the accident? And just who is an “electrosensitive” person? Studies have been done where self described electrosensitive persons were exposed to low level elecromagnetic radiation and fake (no radiation) sources. They couldn’t tell the difference! Shocking! Let’s let science rule the day rather than emotional rumor mills.

I live within 30 yards of a new cell phone tower at eye level. My 2 year old daughter’s bedroom is next to it. Reading that LA’s bravest, who routinely enter toxic smoke and asbestos dust are concerned about radiation from these high power antennas tells me I should check into the legality and permitting of that antenna. From what I’ve read they are not supposed to be at eye level with residential property.

At least get free wifi for the city if they are legally able to put up the tower. Make the internet completely free. (Ad supported, no connection costs – how are you on line right now?)

I concur with Kevin.

The world health organization classified the microwaves used by wireless as a class 2B carcinogen after reviewing the science world wide. People are definitely becoming neurologically sensitive after being exposed to strong sources of wireless radiation over time. I know 20 electrosensitive people; all young and healthy other than their electrosensitivity. Did you know Lebron James had a tumor removed from his cheek where he holds his cell phone. Google Lebron James spring surgery. Wake up the industry is spending Billions hiding wireless health effects. Just ask Steve Jobs if wireless is safe. See saferemr.com from UC Berkeley School of… Read more »

While I might sympathize with esthetic concerns, these can probably be easily mitigated. (How about the tower on the 405 that looks like a tree?) But health concerns are just more junk science right up there with anti-vaccination airheads. And when the next earthquake, flood, etc.. happens, we’ll be glad those towers are there.

Let me guess…West Hollywood West residents are the ones opposed. It makes sense to have such a tower at the Sheriff’s station. I would like to hear what they are opposed to. I may attend this meeting if I feel up to it.

By all means let’s be sure we the details/risks. But this has the potential of becoming another fact-free NIMBY issue that is raising its ugly head in WeHo.
One point – if the Sheriff’s station property might be redeveloped, that might factor in.