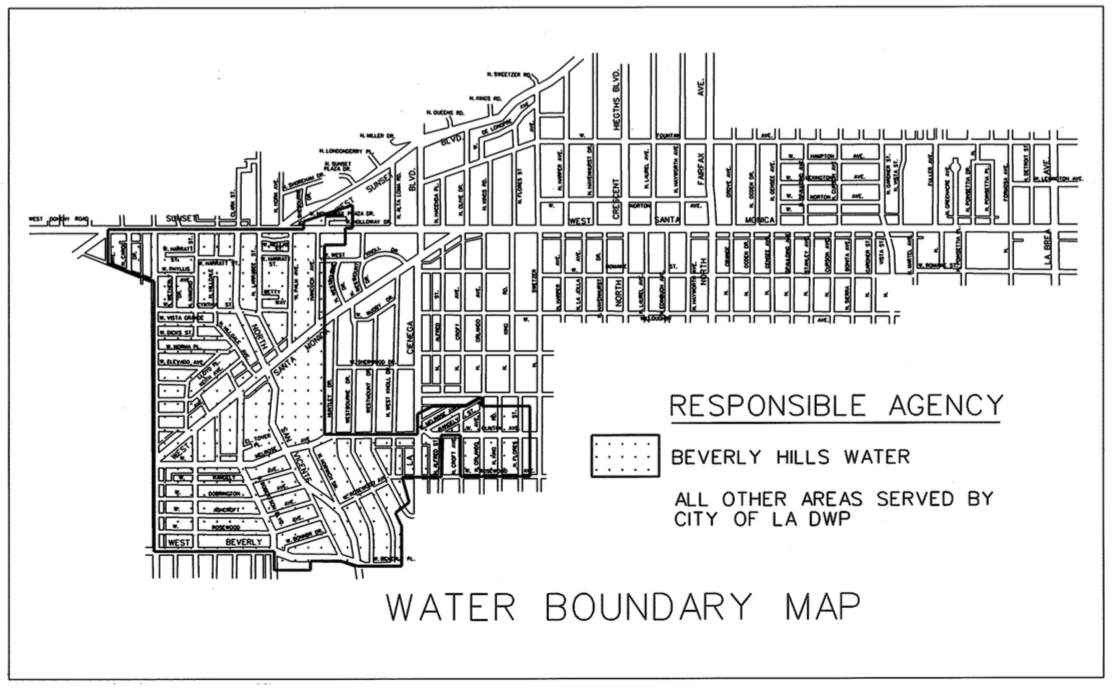 Residents of West Hollywood’s Westside are facing much tougher restrictions on water usage than those in other areas of WeHo.

Those restrictions include limiting the watering of lawns to no more than two days a week, a ban on washing cars with potable water and a $1,000 fine for draining and refilling swimming pools. Residents who use excessive amounts of water also may have to pay a surcharge for their water usage.

The strict new conservation measures were imposed by the Beverly Hills City Council in response to the state-wide drought and a projected 15 percent cutback in water delivery from the Metropolitan Water District, which supplies 90 percent of Beverly Hills’ water. WeHo’s Westside residents get their water from the City of Beverly Hills. Residents of the rest of West Hollywood are served by the Los Angeles Department of Water and Power (LADWP).

Water usage varies according to time of year, with more water typically used during periods of warm weather. Overall Beverly Hills (and thus West Hollywood’s Westside) has one of the highest rates of water usage in California — 216.6 gallons a day per resident in September, for example, compared to 78.9 gallons in Santa Barbara. Because of that level, the state is requiring Beverly Hills to reduce water usage by 36 percent.

The LADWP, which serves a much larger geographic area, told WEHOville that it is not able to break out figures for water consumption by its West Hollywood residential customers. Its overall lower per capita daily usage means the state will require it to reduce consumption by 16 percent.

The Beverly Hills City Council also is considering implementing a system in which a surcharge will be added to the bills of those who use large amounts of water. The legality of such a surcharge currently is under investigation. All residents except for those in the lowest tier of water users are expected to reduce their use to 70 percent of the amount in a baseline period that the Council will determine.

The Beverly Hills City Council imposed the water use restrictions at its study session last week and is expected to formally approve them at its formal council meeting on Tuesday. At that point, all restrictions immediately will be enforced. Other rules include the following:

The LADWP has allowed watering of lawns three days a week. But last week its board of commissioners approved new water conservation rules that would let the Los Angeles City Council restrict watering to two days a week and would require that all pools be covered to reduce evaporation. The West Hollywood City Council has agreed to follow water restrictions enacted by the city’s water providers.

Water usage surcharges, if enacted, could be a major burden on owners of older and rent-stabilized apartment buildings where apartment units do not have individual meters. Without such meters there would be little incentive for inhabitants to reduce their water usage.

I wonder if the City of West Hollywood or any other city will cut back or stop street sweeping and the power washing of sidewalks?

I talked to BH Water. They said the current plan is not to penalize low-use customers. Tier 1 users likely no impact. Next level above Tier 1, slightly higher rates at least in initial increments. Bigger impact on heavier users. She said the BH City Council getting into it next meeting, said their decisions are equally applicable to their WeHo customers. Not sure what enforcement ability (tickets et al) they have though this side of border, or if WeHo has people who would do this (car washing, more than 2 day a week watering or during daytime etc).

@ Chris – good point as long as i see swimming pools, water fountains and car washes wasting water in beverly hills, they can mind their own business! the worst part is that most water WASTING during the California drought comes from the Agricultural industry SO threatening residents and their showers or what plants they have is just draconian misdirection ie the ‘easy way’ to convince voters youre taking action both sides of the isle are paid off by their pet-industry donors for example Monsanto donates to everyone’s campaigns in every election swim upstream and tell Ag to tighten their… Read more »

I have trouble believing the westside of WeHo has a higher residential water usage than Beverly Hills as well. Have a multi-family building that is occupied by 3 adults in the area and our water usage is very close to @ToddBianco and @ChrisSanger and under or near the average 78 gallons a day per resident in Santa Barbara than 216 gallons a day per resident average in Beverly Hills. We have succulents, low flow toilets and showerheads, and energy efficient appliances. The WeHo area that Beverly Hills provides water for has six big hotels and more on the way. Wonder… Read more »

I have suggested that the City of West Hollywood outlaw coin operated washers that are not energy efficient .

Does anyone really believe golf courses and cemeteries are going to become brown dead pieces of land due to lack of water? Few most likely ever made contingencies plan in case of a drought.

With this water shortage perhaps the city should reconsider the building of two new swimming pools to replace the one now in use.

My use (2 story house, 2 residents) in the last reading comes to 51 gallons/per person per day. We already conserve. If BHW says, sorry, you need to reduce 36 per cent, that’s a problem – not undoable, but it means a lot of unflushed toilets and 5 minute showers and using the dishwasher once a week. Happy to do my share, but the ultimate plan needs to give a break to those already conserving.

The water at the San Vicente/Melrose is in-reclaimed spring/seepage water that is simply being disposed of. That said, I recall looking through the fence during the early construction phase and noting that there really IS a LOT of water being produced there that should somehow be put to productive use: Perhaps include a cistern in the park for PHASE ll that could hold this water and use it for irrigating the park? Seems to me to make more sense than an $80 million roof-top pool. In WeHo there are several locations–some new construction; some old, that produce a lot of… Read more »

tear out grass lawns and replace with drought friendly plants and rock gardens. Several people on my block have done it, and it looks amazing. I don’t know why this hasn’t been incentivized for houses AND apartments who are looking for curb appeal, yet want to conserve water.

The Getty Villa and Getty Center shut off their fountains last year, trying to conserve water and they have a gazillion dollars! If they can do it, so can WeHo. So let’s shut off the fountains at least as a gesture that we are trying to do our share during this horrendous drought.

Exactly Todd. It seems profoundly illogical for WeHo West to be using far more water than Beverly Hills. Are these supposed numbers taking into account the PDC, WeHo Park, businesses and the water that has been POURING out of construction sites now for YEARS. We too at our house have been very conscious of our water use for years and would be hard pressed to find ways to lessen our use. There needs to be a system in place that takes into account those who have not been abusing the use of water to begin with. Let’s make sure we… Read more »

Wonderful. It’s kind of hard to believe that per capita usage in West Hollywood is higher than that of mega-mansions in Beverly Hills. Most of us have lots in the 5,000 square foot range which would fit in the basements of many houses in Beverly Hills. Good thing I don’t have a swimming pool and I don’t wash my car at home. I also don’t have a lawn and my landscaping doesn’t use much water to begin with. Because we started economizing a long time ago, a 16% reduction is more difficult. And I could be penalized further if Beverly… Read more »