pretty much every community west of West Hollywood had higher prices, with a one-bedroom in Beverly Hills going for $2,100 a month and a one-bedroom in Venice priced at $2,500 a month. Even downtown L.A., which is seeing a bit of a boom as hipsters try to imagine it as the next Manhattan or San Francisco, is renting one-bedrooms at a median price of $2,380.

So where to go if you’re looking for a cheap abode? According to Zumper’s figures, you might consider Mar Vista, where a one-bedroom was renting for a median price of $1,610 in March. But remember as you plan your apartment hunt that when Zumper says “median” that means half the units are priced below that number and half above that number.

And if you’ve got cash to burn, `consider the unit now for rent on 8920 Cynthia St. between North San Vicente and Hilldale, where $11,500 a month gets you a two bedroom home with a one-bedroom cottage in the back yard. And then there’s the “oasis-style pool with spa grotto, outdoor entertainment cabana complete with fireplace and salt water fish aquarium.” 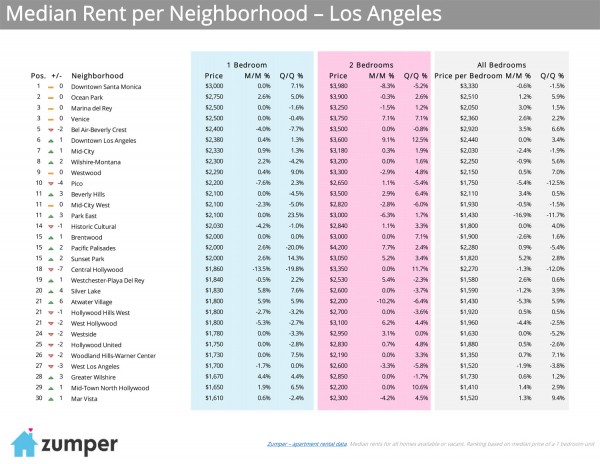 If you want to depress yourself further – just give a look at the new Avalon Building’s website as it is now taking deposits on its units – the cheapest are all taken so that a 1 bedroom starts at over $2500 a month – and goes way up from there. They have one of the strangest bathroom layouts ever in that the sink and toilet are in one room and in a separate room is the walk in closet with glass door to the walk in shower. Talk about steaming the wrinkles out….I pray that the exhaust fan is… Read more »

These escalating rents (rents which are unfortunately going to continue to escalate) are a direct result of a 1995 law passed by the California Legislature called the Costa-Hawkins Act. Despite many court challenges from pro-rent control cities like West Hollywood, Santa Monica, Berkeley, and San Francisco, the law is largely in tact in the same form for the past 20 years. Until Costa-Hawkins, the City of West Hollywood could regulate rental rates. That meant that if a tenant moved out of his/her $800/month 1-bedroom, the next tenant couldn’t be charged more than $800 plus a nominal annual increase (usually around… Read more »

I lived on Palm Ave. for 15 years before decamping to North Hollywood this year. What we are seeing now is two people splitting the cost of a bachelor/single apartment. Combine that with the fact that West Hollywood is now more desireable than ever to people coming in from all around the world, so there is no shortage of people willing to pay the ever rising prices. Tenants are easily replaceable in WeHo. But the result is the loss of community/neighbors looking out for one another due to the fact that the high costs generate a much higher rate of… Read more »

The picture with the caption is next door to me and the address is wrong. It’s really a 2 bedroom 2 bathroom main house with a 1 bedroom guesthouse in back. That quoted price was more for his Air BnB or VRBO listing. It’s now rented for a year to a family and I don’t think they paid that much for the house. It was for sale for a long time at $2.2 million but never got a serous offer. The Neighborhood is much happier that it’s rented full time as opposed to the party time vacation rentals that had… Read more »

Wealthy people and corporations lose money and go broke too. And as for foreign dollars, Russia’s economy is really struggling right now, and in this last financial collapse many countries took a huge hit. I think when people talk about a bubble, they’re talking about a top, global 10% bubble to burst (the people who didn’t really feel the last financial collapse). As for developers, I think most, if not all, of them are currently robbing Peter to pay Paul- meaning they have property/projects but no cash, so they need to go through all the City hoops to get as… Read more »

@Disco Dan: The rent prices really didn’t “fall” that dramatically in 2008 in my opinion. They have been steadily rising for years with a huge surge the last 2-3 years. I’m not so sure there will be bubble to burst. Loans are legal now. Nothing to fall out. We just have more wealthy people, foreign dollars and corporations buying into our real estate market. That’s not gonna change.

The apartment costs are NOT sustainable ! Visions of 2008 dancing in my head. I remember during The Great Recession (TGR) SO many apartment buildings with FOR RENT signs out front and with lower rents prior to TGR. Many learned economists are predicting an even worse scenario than 2008 or, maybe even, 1929. To them, it is not a question of IF, it’s a question of WHEN ! !

What’s crazy to me is even for the cheapest $1600 apartment in Mar Vista (assuming people use half their income toward rent)…you would need to gross nearly 45-50k a year. I just dont see how these prices are sustainable. I remember when Weho and a lot of LA was affordable. Actors, musicians, etc would come to LA and try to make it. You cant find a studio in Weho for under $1300 anymore. Where do these people live now? Do 3 kids rent a 1-bedroom apartment? Half the entertainment jobs in this town are internships or part-time making minimum wage.… Read more »