So what does it take to reform a dysfunctional and expensive five-member union at West Hollywood City Hall known for internal backstabbing and allegations of sexual impropriety? 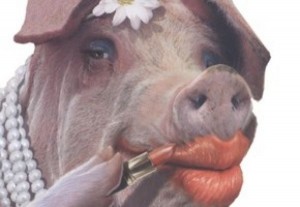 Clearly not the West Hollywood City Council. The Council on Monday will take up a proposal to deal with the controversial deputy system that is nothing more than putting some lipstick on a pig.

The proposal would have Council members review the time sheets of their deputies, some of whom have been accused of coming to work late and leaving early. However the Council members have full time jobs elsewhere, and the proposal does not call for on-site verification that the highly paid deputies actually work a full day.

The proposal calls for the deputies to meet weekly with the city manager or assistant city manager to discuss their schedules and activities. However it doesn’t give the city manager greater control over five people known for sometimes acrimonious dealings with one another and other city staffers.

It also calls for the deputies to work with the city manager’s staff in developing a new strategic plan for the city’s growth and development over the next 20 to 25 years — work they would be expected to do anyway in a system organized to serve the residents of West Hollywood rather than the political aspirations of its Council members.

At its March 2 meeting, the Council punted on a proposal that called for freezing the hiring of new deputies and having the current deputies report directly to City Manager Paul Arevalo or someone designated by him. As is the case in some other cities, they would have been part of a pool of city employees available to assist the five Council members in scheduling meetings, researching legislative initiatives and responding to questions and concerns from local residents. At that meeting, the Council suggested it would review that proposal after the June 2 special election, at which point there will be a full five-member council.

But already it’s clear the politically charged system will remain in place. Mayor John D’Amico has shown no sign that he will find someone to replace his deputy, Michelle Rex, his former campaign manager who has been at the center of some of the personal dysfunction among the deputies. Newly elected Councilmember Lauren Meister recently named as her deputy her campaign manager Scott Schmidt, a man better known for his political acumen than experience as a public servant. Newly elected Councilmember Lindsey Horvath is recruiting a new deputy, and the money is on her campaign manager, Estevan Montemayor. Councilmember John Duran continues to be served by Ian Owens, who he met on Grindr, the hookup app (which some now joke is the gay LinkedIn) and had sex with before hiring him.

Perhaps the winner of the June 2 election should ask Lisa Vanderpump, whose reality TV show “Vanderpump Rules” focuses on the internal shenanigans of the staff at her restaurant, to do the recruiting.  Then Deputygate will continue its long and expensive run as West Hollywood’s version of a reality TV show, and we residents of West Hollywood can stay tuned for more comedy and drama as the year rolls on.

One of Cassandra's Snakes

…and THEN there’s the city manager’s salary and benefits. Might be time for a change from the top down. Did the deputies set their own salaries or did the city manager set the salaries? If the salaries have gone up so much over the years, which of the 30 year Councilmembers were approving those salaries? Just curious.

I ran into Estevan Montemayor today and he told me he will NOT be Lindsay’s deputy. He seemed to be telling the truth but you never know.

Meister doesn’t get a pass. Scott may have the title of “interim” but he’s there to stay. It was a way to make him avoid going thru a proper HR vetting process.

Wehoville needs to continue as muckraking source to expose Weho City Hall for what it is. A cash cow for mediocrity. Like that the FBI should investigate this group.

@Woody McBreairty. I agree. You are right we should not elect council members that employ their campaign Managers. Meister get’s a pass as Schmidt is “Interim.” D’Amico is supporting Shink whose campaign manager is Michelle Rex’s former business partner. Assuming she would hire her even as an “interim” the cat fighting would be way too disruptive. We can’t abide this sort of thing any longer.

I wonder & think it would be interesting to know how & why this “system” occurred & who set the deputy’s salaries. It’s a very curious thing how this could occur in West Hollywood but nowhere else around us including Beverly Hills which has the same population & form of government. I presume there are records (or Paul Brotzman could tell us) just what sequence of events & who was involved in implementing this system I think I know the answers but we should find out for sure from reliable sources who know the facts.

What I take issue with are the inflated salaries of the 19 supervisors, analysts and managers making above $125,000. Those are middle management titles with upper management salaries. These numbers do not include the benefits dollar amount which for most of them are in the $50-$60,000 per employee range.

Woody—Turn the lights and the air conditioner on……It’s hazy and smoggy.

The city manager wanted to have all deputies become party of pool that reports to him. This was an agenda item the night before election. Now that power is shifting to the new leadership and D’Amico is no longer a 5th vote we see The city manager try to change the whole system. For now we need to putt the final nail in the old guard’s coffin and start telling people to vote for the most electable candidate on June, 2nd. Let’s take back our city once and for all. I am voting for Heidi Shink.

Pressure pressure. We need to keep the pressure on. It must change. It can change. It will. We can’t do it without Hank’s help. Thank you Hank… Brian