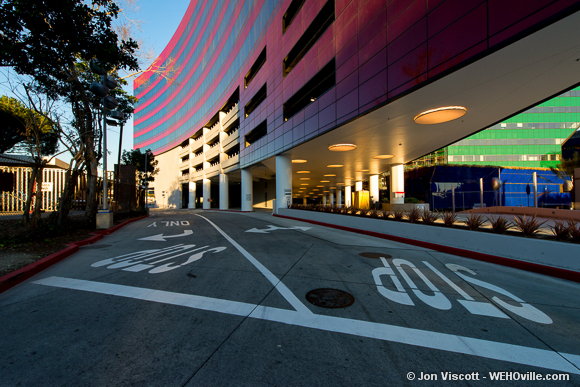 The Red building finally has a tenant. Four in fact.

Also moving into the 400,000-square-foot building are AllSaints, a men’s and women’s clothing retailer, which is leaving New York City; Criteria Corp., an employment testing service, and Gaumont International Television, an independent TV studio. Altogether they will occupy 65,000 square feet.

The Red building is part of the three-building PDC complex bounded by Melrose Avenue on the south and San Vicente Boulevard on the west. Designed by noted architect Cesar Pelli, construction began in 2007 and was completed in 2013. Since then it has been empty except for a West Coast office for Cohen Brothers Realty, which owns the PDC. Cohen told the Times that he is in negotiation with other tenants who might occupy 90,000 more square feet.

The zoning and approval process for Red began in 1998 when Cohen purchased the Pacific Design Center from Catellus Development Corporation. But it wasn’t until 2004, when the nearby Green building was fully occupied, that work on Red really got into gear. The design was revealed to the press in 2006 with a $100 million price tag.

It turned out that a 2010 opening was an overly ambitious goal. As Gustave Heully reported in WEHOville, there were excavation issues. During the first years of construction, heavy rains inundated the site, which already had a high water table, causing the foundation to often fill with water.

But water wasn’t the only underground problem. The builders expected to find two uncharted oil wells, but two became three, three became five, and five became seven wells. Each required removal and decontamination of the soils surrounding them, a lengthy and expensive process.

These delays not only set the project back two years and counting, but ballooned the cost of the Red building up to $165 million. That’s the same price Cohen is said to have paid for both the Blue and Green buildings in 1998.

The Red building will add 400,000 square feet of office space to the PDC, but filling that space could prove difficult. The LA Business Journal has reported that Cohen has had trouble leasing the space because of his high asking price, which is at the top end of the Los Angeles market, and his desire for only the most exclusive and long-term tenants.

Oops, too many furthers……

@fine7760e dunn: Thanks for the additional details. It would appear as though the PDC/Cesar Pelli project was not Mr. Cohen’s vision but when he purchased it was either uninformed or unaware of the awkward site issues which may, among other things, have influenced the construction of the Red Building and functioning viability of the completed project. Do you think Is it likely that Mr. Cohen’s efforts to further development of the MTA property further compounds this in an equally awkward manner?

. If one is familiar with the MTA yard one would observe buses parked in rows. Those rows are numbered up to about 25, that’s twenty-five rows of three sizes of buses. Standard 40 foot, 45 foot buses, and 60 foot articulated(bend in the middle). In addition there are four lanes for Bad Order Buses( awaiting repair) plus four fuel lanes. Then there is a double wide lane passing maintenance and a double lane of the south side for passing and storing buses with possible gas leaks. On the east and west sides of the yard is double lanes. With… Read more »

Interesting that Catellus Development, which incidentally was responsible for burnishing Union Station et al makes no mention of the PDC in their past projects. Cohen apparently purchased the site but was not the original client nor the one that engaged Pelli for the total design concept. Why would Catellus sell to Cohen and how realistic was Cohen in visioning the total campus? Cohen now envisions development of the adjacent land. Can someone with specific knowledge get the facts to add up?

You could shoot a gun through the blue & green building and not hit a soul. Like a morgue there.

Does anyone know who occupies the Green and Blue buildings?

While I’m thrilled that FINALLY, someone is going to begin to occupy this building, it’s still only 16% of the available space. I’m sure the Cohen Bros. were hoping for a larger anchor tenant, but at least this is a start. I wonder if they ended up settling for less after leaving it vacant for so long. I’ve also noticed that Cedars has been building out more of the 825 San Vicente Blvd. building. They leased the whole thing, but only occupy a portion of one floor. It looks like they are planning on moving more people in. This can… Read more »