Only halfway through its fiscal year, the City of West Hollywood has received $5.5 million in building license and permit fees, 15 percent more than the $4.8 million that it budgeted for the entire 12 months ending June 30, 2015. That is a clear sign of major growth in the city, with the increase attributed largely to fees received from developers of projects such as Movietown Plaza and the Domain project, which are under construction, and a new hotel proposed for La Peer Drive. 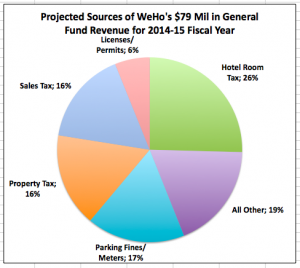 A report from West Hollywood’s Finance and Technology Services Department cites other increases in revenues for the General Fund over what was budgeted. For example, the city’s hotel room tax, its leading source of revenue, was up 11 percent in the last six months of 2014 compared to the same period the year before. That puts the city on path to realize the $20 million it has budgeted for this fiscal year from those taxes. The city report attributed that increase to a record number of tourists. In July and August 2014, it said, most hotels were reporting occupancy rates of nearly 95 percent. The report notes that those revenues are likely to increase even more when hotels in the planning stages or under discussion, such as the James and Marriott Edition, actually open. The General Fund, which includes revenue that the City Council can allocate at its discretion, is budgeted at $78.7 million for this fiscal year. Other revenue of $23 million gives the city a total budget of $101.8 million.

Sales tax revenue increased 13.5 percent in July -December 2014 period over the year before, for a total of $4.6 million. The city receives 13 percent of revenues from the nine percent sales tax, with the rest going to the state and Los Angeles County. Sales taxes from building supply businesses were up 14.7 percent over the same period last year, reflecting the increase in new construction. Sales tax revenue from restaurants and hotels was up 13 percent. “Finance staff anticipates that sales tax revenue will continue to increase at a moderate pace over the next few years as the economy and consumer spending both continue to improve, new businesses open in the city as real estate development projects are completed, new residents move to the city, and businesses and their workers occupy vacant office space at locations such as the PDC and The Lot,” the report says.

Property taxes, another major source of city revenue, increased six percent from July through December last year. The city’s report cites rising property values and the addition of new buildings such as the Pacific Design Center’s Red Building and the Huxley and Dylan apartment buildings on La Brea Avenue. New projects such as the Marriott Edition, Movietown Plaza and the Sunset/La Cienega development are expected to create future revenue increases.

Parking fine and parking meter fees, perhaps the most contentious source of city revenue, were up eight percent to a total of $8.3 million for the six-month period. The report attributes that increase to extending parking meter hours and higher meter charges, which led to increase enforcement of parking laws. The city has budgeted $13.5 million in parking fine and meter revenues for this fiscal year.

The city’s overall budget for the 2014-1025 fiscal year is $101.8 million. The finance staff will ask the City Council on Monday to amend the budget to incorporate the increases in revenue as well as a transfer of $1 million to the city’s affordable housing trust fund. That money was used to help the West Hollywood Community Housing Corporation (WHCHC) acquire property at 1123-27 Detroit St., which WHCHC plans to incorporate into a new affordable housing project that will include the property now occupied by the Detroit Bungalows.

sure, Guy Privaton, how about we give $43.2 million to developers and demolish Plummer Park and have an exciting “Great Lawn” instead of depressingly old historic buildings and old-growth trees? oh, wait, that’s already been proposed…

anyone have better ideas???? Please share them here. I think the city needs help spending it.

The incredible revenues the city receives via parking tickets, hotel taxes, etc. would make one wonder WHY ? ! To me, the reason is that these sources of revenues assist WeHo to provide great services (Dial-A-Ride, Taxi Debit Program, etc.) which actually assist the elderly. And at almost 71, I am in that class and I do appreciate these programs however infrequent I may use them. But I think it’s a way to keep Senior Citizens mollified, so they do not want any change in city government. And Senior Citizens DO vote but if they think that these programs are… Read more »

Chris Sanger, if you are such a stickler for the truth, why put words in my mouth? I wrote “we are paying more than ever in taxes and fees”. I did not say, as you imply, that tax rates are higher (I actually haven’t checked). Actually most fees we pay to the city have been significantly increased (parking permits, parking meters, tennis courts, etc etc..) in the last few years. Collecting more of our money is nothing to brag about, it is at best neutral. This has nothing to do with “city council opponents” and not voting for Heilman doesn’t… Read more »

Taxes aren’t higher. Revenues are going up. Two different things. The city is prospering. I know this bothers the city council opponents, but the truth sometimes upsets people.

I’m glad to hear we are paying more than ever in taxes and fees.

With this surplus in tax revenue perhaps the city could lower property taxes. Wouldn’t that be novel for our small part of California.

Good news! Revenue from extended meters and fines are up, and so is sales tax revenue. Business is better than before extended hours and one can actually find a place to park.

Even though the easiest thing anyone can do is to NOT get a parking ticket……extended meter hours and punitive fines for non compliance are proving to be a great source of revenue that benefits our community.

And yet most of the posters here think that this is a horribly run city that needs total upheaval. Yes, there is always room for improvement, but also much more room for damage. Don’t let the amateurs takes over and join John D’Amico and his quest for total control Abbe Land is retiring after many years of valuable service. Let’s keep at least one knowledgeable, successful incumbant on board, even if a bunch of petty folks are ruled by jealousy and frustrated by his success. I have little doubt the voters on Tuesday will, at least on this point, concur.… Read more »