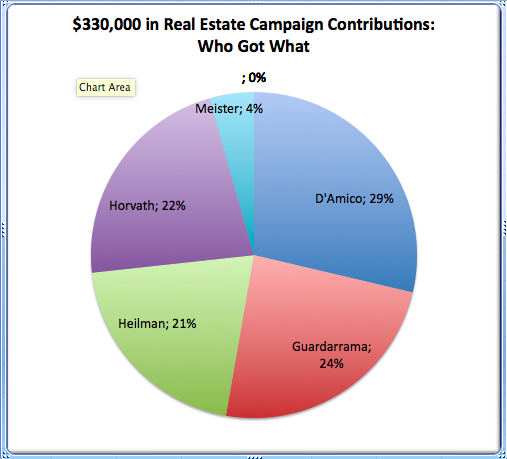 The most recent campaign finance reports, which cover the period from Jan. 18 to Feb. 14, 2015, show that roughly 36 percent of the $622,000 in donations thus far comes from real estate interests. Those interests include developers, real estate agents, real estate investors and lobbyists and lawyers who work for developers of West Hollywood projects.

Challenger Lauren Meister, who is a critic of what she sees as the City Council’s willingness to override existing zoning laws to accommodate new development, has received only four percent of the money donated by real estate interests. Other candidates in the race have received less than one percent. 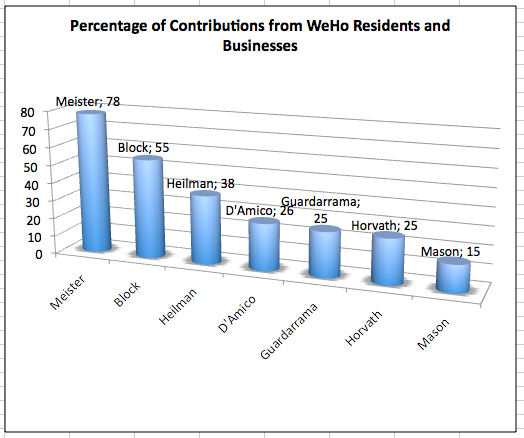 The latest campaign donation reports show that the Tuesday election, as in years past, continues to be dominated by donations from out of town interests, which include real estate developers, billboard companies that need the Council’s approval for some projects and city vendors such as Athens Services, the trash collector, whose contract was extended for 15 years by the Council last year without putting it out to bid.

Meister is the largest recipient of donations from local residents and business owners, with 30 percent of all local contributions made in this election thus far going to her (they constitute 78 percent of all the contributions made on her behalf). She is followed by Larry Block, with 21 percent, John Heilman with 14 percent, John D’Amico and Lindsey Horvath, with 10 percent each, Joe Guardarrama with nine percent and James “Duke” Mason, who got six percent of donations from locals.

D’Amico has collected 25 percent of total donations, including those from an independent expenditure committee outside his control that is campaigning for him. Next is Horvath, with 20 percent, followed by Guardarrama (17 percent), Meister (15 percent), Heilman (14 percent), Mason (five percent) and Block (four percent). Candidates John Allendorfer, Brian Funnagan, Christopher Landavazo, Matt Ralston and Tristan Schukraft have reported small or no contributions. 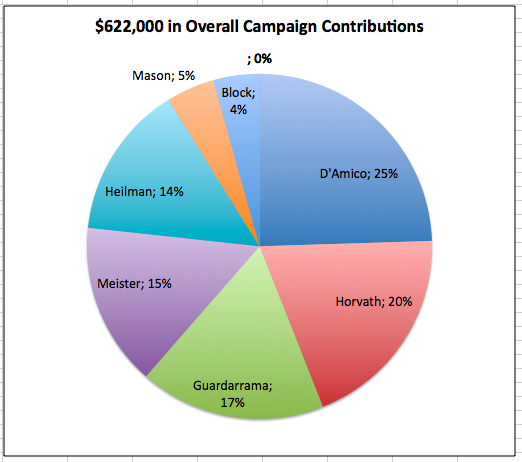 Voting for any candidate who receives money from special interests will be bad for the future of our city.http://www.ralston2015.com/TakeOverOfWeHo

Hank, thank you for your thorough reporting. I do have to add a big missing piece: the PAC that has been organized by Duran has collected $130,000 This PAC was created to protect Heilman, get Horvath back on Council and elect Guadarrama. It’s all money from special interests, commercial real estate interests…. City Clerk records: http://weho.org/home/showdocument?id=19322 It’s not a small detail and I trust it was just an oversight.

I’m tired of Heilman’s rubber-stamping approach to density and development, and Horvath’s clearly his puppet. He’s desperate to retain control now that Land and Prang are gone, so he’s counting on Horvath to vote in lock-step with him – just as she did during her brief, unelected tenure on the city council. She has no voice of her own. Voting her in would be terrible for this city. Interestingly, Guardarrama is being championed by both the Heilman team AND the D’Amico team. Meister’s also been touted as part of the D’Amico alliance. I swear, this election’s like “Survivor”! Meanwhile, Larry… Read more »

when CES, the organization that put weho on the ballot as its own city in order to protect renters says d’amico and meister represent “BIG Real Estate interests who oppose renters’ rights,” people better shut up and listen. both d’amico and meister are supported by jerome nash, the wealthy landlord responsible for the law, ellis law, that lets property owners evict all its tenants and build new “high-end” projects. https://www.wehoville.com/2015/02/26/rent-control-advocate-attacks-city-council-candidates-damico-and-meister/

Hank and his staff deserve continued thanks and applause. We haven’t had a “paper of record” in this town providing such a service since – someone please tell me when? Their consistent good work and analysis is not only greatly appreciated but, perhaps more importantly, serves as our careful eye, watch-dogging the beast of local politics. Think global, act local…

Shawn – by your logic, Jerry Brown was equally wrong to run two terms since legally he could after they were enacted. Term limits – a key part of Newt Gingrich’s contract for America, a totally Republican idea, is for losers incapable of winning any other way. It will almost certainly be D’Amico and Heilman winning, with Meister and Guardaramma likely the third (not the Meister might not be 1st or 2nd). Heilman has by far the most effective flyers (where the race is won). Meister’s embracing of D’Amico hasn’t done her any favors. And I’ve yet had anyone from… Read more »

What does it matter that Block gave himself $10K? That says to me that he’s willing to put his money where his mouth is – he’s so dedicated to his cause that he’s willing to pay for it so that he doesn’t have to be beholden to outside interests. And as far as I can tell, the only thing that money is doing is clogging up my mailbox with daily fliers and my phone with daily voice messages.

sorry, my question was about the second chart…

Does the first chart include the 10K loan Larry gave himself? If so, then that % is a little misleading..? Great work, btw!

I predict Lauren Meister & John D’Amico for big wins & it wouldn’t surprise me if Lauren takes first place. I also think I know who the 3rd place winner will be but I’m reserving my prediction for the moment. I’m hoping it will be Larry Block. I think he has a good enough record as a community leader & activist that he deserves a chance on the City Council. Voters say they want change & we can’t make change unless we give candidates like Larry who are new, but have worked hard to improve the community, a chance. This… Read more »