The ongoing struggle of businesses in the West Hollywood  gay nightlife district known as Boystown continues with the departure of Michel Thomas from Rage. 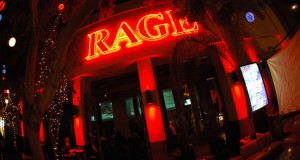 Thomas, a gay man who had worked as a promoter for Rage for 11 years, bought it from its heterosexual owners last year. At the time he boasted that Rage now would be gay-owned and -operated. ” “I have a problem with a straight establishment trying to make money off of gay people,” he said in an interview with WEHOville last year.

Michel said his departure occurred when the landlord discovered that Rage’s owners, Robert B. Maghame and Saeed Sattari, had sold the bar to him. Unbeknownst to Michel, a condition of their lease of the building in which Rage is located requires the owner of the building to approve any new owner of the business. The owner is Monte Overstreet, whose large property holdings also include the building where Eleven, another gay nightclub, formerly was located. Eleven owner Richard Grossi, who is gay, sold his lease last year to a heterosexual couple from New York City who have opened Flaming Saddles, billed as a gay Country Western bar. As of publication, WEHOville has been unable to reach Maghame, Sattari or Overstreet for comment.

“I was made aware of this on December 10th and immediately sent the sellers a rescission notice regarding the transfer of ownership,” Michel said in an email to WEHOville. “The sellers have so far refused to honor the rescission and make full restitution, so I have been forced to sue them in Superior Court. My attorneys and I are very confident that I will prevail in court.

“I want to take this opportunity to thank all of the customers, employees, promoters, performers, DJs and media who helped me turn Rage around and increase the business significantly over seven and a half months.. Together we have made great strides and I truly believe if these trends continue Rage will have a bright future. ”

Michel said he also was cutting ties to GAMeboi, an event he created in 2003 that has become one of the big nights for Asian gay men. “I leave it in good hands and with a great future,” he said.

Rage, which is located at 8911 Santa Monica Blvd. near San Vicente, awas opened in 1983 by Maghame and Sattar. It is considered by some to be an historic venue in gay West Hollywood. Older men post online about it being the first gay bar they ever entered. Michel said that Rage has encountered problems in recent years because of the difficult relationships that the owners had with gay party promoters.

The gay nightlife district has undergone major changes. Clubs like The Abbey, one of the area’s most popular venues, increasingly attract a heterosexual crowd. P.U.M.P., a bar opened by the reality TV performer Lisa Vanderpump at the corner of Santa Monica and Robertson boulevards, was billed by her as a gay club. But visitors note that on most nights it has a largely heterosexual crowd.

To those commenting on the previous use of the building, ESPARTACUS was an upscale restaurant which occupied the space just prior to Rage. I remember watching limousines line up outside of this space back in early 1981- 82.

I lived up Hilldale and over a couple of blocks from where Rage is now back in ’78 for awhile, before fleeing LA in horror a few years later. WeHo has never, and will never, recover from the pandemic. You might as well throw in the towel and call it ‘Girls’ Town” now. Reason? Guys hating social interaction and going direct to the hookup sites, where skyrocketing STD rates await them. Don’t try to counter argue; I’ve been around a LONG time and have seen it all. Silverlake’s going str8, too, as is the Castro up north. Hey, you guys…YOU… Read more »

It is not just Weho that has been invaded by straight people, its happening all over the country. As much as we all love Rupaul’s Dragrace, the show has brought lots of lesbians and straight people out to the gay bars. I lived in Nashville up until 2001, and I have visited often over the years. From around 2006 and before, the hip busy gay bars in Nashville (Play) were 90% filled with gay men, and a few token lesbians here and there. I was at Play the big popular gay bar in Nashville twice this year. The demographics appeared… Read more »

From reading different articles it appears that there is an orchestrated effort to push out gays. I will not buy Faye Dunaway’s condo

If a business is doing poorly, and that business is then bought out by the promoter, then can you really expect an improvement? I really think that a good business model with a great venue can make it anywhere and do well. Maybe it is not a question of gay or straight, and just a question of good business. I have been to packed gay clubs in WEHO, and to some empty ones. too. Give people a good product and they well come to it. It can’t be all about milking EVERY penny out of bar receipts.

The all-gay-only clubs seem to no longer be needed or wanted by younger generations. They prefer “gay-friendly” bars that cater to everyone. That is why the Abbey, which is hospitable to both gays and straights, is always packed, while the gay-only Rage sits empty.

Its not just rage but most gay clubs, now its a surprise when you see a club full

Brian nothing wrong with straight people in WEHO but WEHO is what it is because of the gay community and some older Jewish residents. I’m not gay but WEHO heritage must be kept, celebrated, and expanded upon. It’s not WEHO if the gay community vanishes, it will be Santa Monica or any other boring dull neighborhood street.

The (potential) problem is the drunken straight men in the straight bars having issue with openly gay men having fun in those straight bars. This still goes on, though it’s certainly not as bad as it used to be. Once we are fully past that, then there won’t be a need for gay bars anymore. Rage was doing well again with the Plastic Fantastic promotion formerly at Eleven, so this is unfortunate. Rage is one of those places which got too full of itself with a high cover charge and average drinks at best with sub-par promotions. If you want… Read more »

I have heard good rumor that there is a clause in all the leases in which the building owner has stating that if there is any profit from selling you’re business during the lease that any and all profits go to the building owner! Just outrageous ! Greed greed greed ! So the lesson is to watch what you sign in you’re lease !!!!!! And or don’t lease from greedy landlords like that !

I’m stealing this quote from the great Julia Sugarbaker and applying some creative license to it. I think it sums up the way so many of us gays feel about our straight allies and supporters. “There’s no need for introductions, Straight Girl, we know who you are. You’re the Girl who’s always wherever gay men gather or try to be alone. You want to eat with us when we’re dining in hotels. You want to know if the book we’re reading is any good, or if you can keep us company on the plane. I want to thank you, Straight… Read more »