West Hollywood has launched a campaign to raise the awareness of local residents of the need to conserve water. 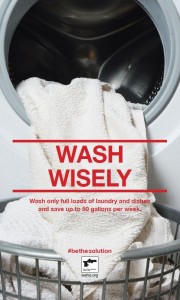 The “Prescription for Water Conservation” campaign is aimed at reminding people that small day-to-day decisions about water use, such as only washing full loads of laundry, make a difference in water conservation.

Despite recent wintery temperatures and rainstorms in Southern California, the state remains in a severe drought. In January 2014,
Gov. Jerry Brown declared a drought state of emergency and called on all Californians to voluntarily reduce water consumption by 20 percent. Throughout 2014, the city of West Hollywood intensified efforts to use less water and to promote conservation.

“The city of West Hollywood has a longstanding history of environmental advocacy,” said Councilmember Abbe Land. “As a city, we are committed to ensuring that we do our part to reduce not only our water usage but also to educate individuals and businesses about how we have to make permanent changes rather than ones only during times of drought.”

The “Prescription” campaign, which is funded by the city, features advertisements showing water-use situations that are stamped with a red text that suggest “doctor’s orders.” The designs catch attention because, at first glance, the messages appear to be public-health messages; in fact each message is aimed at tips to use less water. There are four distinct designs:

Advertising will appear in local print and digital community publications; on outdoor bus shelters and streetlight poles; on electronic billboards, and in social media. In addition, mailed inserts will bring these water-conservation messages to residential customers throughout the City of West Hollywood.

The threat of a severe water shortage is a serious one in West Hollywood, which depends on water piped in from sources outside the region. In 2014, the city made adjustments to its irrigation controllers to reduce water consumption by as much as 50 percent.
In late 2014, the city worked with the West Hollywood Chamber of Commerce and the West Basin Municipal Water District to provide restaurants and bars with table-tent cards reminding patrons that water is scarce and is to be served only upon request. According to the West Hollywood Municipal Code, no person is to be served water unless it is requested.

The California Department of Water Resources estimates that California would need much more rainfall to replenish its 12 major reservoirs and bring an end to the drought. Currently, the major state reservoirs stand at 54 percent of total average storage. The National Aeronautics and Space Administration (NASA) estimates California needs 11 trillion gallons of water to recover from the drought.

West Hollywood residents and businesses are served by two water utility companies: Beverly Hills Public Works and the Los Angeles Department of Water and Power (LADWP). Both utility companies are urging customers to cut back water usage and to consider installing water-conserving fixtures.

For more information, contact the City of West Hollywood Department of Public Works at (323) 848-6375.

WeHoVaudivillian While the residents over looking Silverlake reservoir love their view and they did indeed pay for it per a article about the Silverlake reservoir and Headwork’s pointed out that Headwork’s was the less expensive alternative to covering Silverlake. It would not seem to be so considering all the piping that has had to be laid between Headwork’s and where ever the connection is to be made adjacent to Silverlake. But as I stated previously, the Hollywood Reservoir will not be covered also. People paid for their views there also. You must remember at both Silverlake and Hollywood reservoirs the… Read more »

Why are all the shops and restaurants at Sunset Plaza allowed to POWER WASH (with a bleach solution that runs into the drains to the ocean) their sidewalks SEVERAL TIMES A WEEK ever week?! HUGE waste of water! But, I think we all know the answer – $$$$$…..hypocrites! If the city is going to allow this waste to happen, then let them power wash SM Blvd at the same time…that needs more of a cleaning than Sunset Plaza.

The findings aren’t unreasonable. They are based in sound scientific research. I’m glad (and you are too) there are federal agencies who will mandate steps to protect the good health of people. The USA has some of the highest drinking water quality standards in the developed world precisely because of the efforts of the EPA. Curtailing their effect would drag us down to quality standards enjoyed by people in the developing world – I’m sure you and your family don’t want that. Whatever this congress does, they will not touch any legislation regarding drinking water quality, and rightly so. Cryptosporidium… Read more »

EPA made the rules (covering reservoirs or adding post storage treatment) to combat the threat of dangerous pathogens (cryptosporidium, etc) and disinfection agent byproducts (considered carcinogens). There are plans to cover, add post treatment, or take off line, all existing reservoirs in the United States – this is not a local, DWP specific issue. Silverlake reservoir specifically provided water to South LA residents (Silverlake residents get theirs from a supply near Eagle Rock). The residents of Silverlake didn’t want the lake covered, or an ugly treatment plant constructed. That’s totally fine – they want to protect their house values. But… Read more »

I doubt if the state can enforce specific water rated in the City of Los Angeles since the city imports it’s own water and does not buy it from the Metropolitan Water District. Now if further cuts in the Owens Valley take place then the City of Los Angeles will have to act. I sincerely doubt that Lake Los Angeles or Hollywood Reservoir will be taken off line. And Silverlake reservoir can be put to a reuse as a huge aqua filter with L. A. River water pumped a short distance. Also take note that Congress is looking into many… Read more »

sadly I do not think most people will ever conserve water voluntarily unless it gets prohibitively expensive. We should think about putting a reasonable cap on cheap water statewide, anything above which should cost as much as Evian.

The Headworks project is the one you refer to. It is being built (at great expense) to replace part (but not all) of the potable water supply storage capacity of Silverlake reservoir. The reason it is being built is that Tom Labonge and Eric Garcetti, at the behest of some influential Silverlake residents, forced the DWP to back down from plans to retrofit Silverlake to comply with federal drinking water quality standards. They didn’t like the idea with covering it, or building a treatment plant – this would have saved the city hundreds of millions of dollars, but spoiled their… Read more »

It seems to me that Elysian Park still has a uncovered reservoir. In addition you attack those who live by Silverlake not wishing to loose their lake views. Wouldn’t the same be true for those who live near Lake Hollywood and Lake Los Angeles which is the primary holding site for water reaching the Los Angeles Basin via the aqueducts? And covering all three seems to be a massive endeavor. Unlike the Ivanhoe Reservoir which is relatively small the other three exceed one mile in both width and length.

WeHoVaudivillian Very interesting dissertation. Currently the DWP id building a new reservoir adjacent to Griffith Park along Forest Lawn Dr. Where it is being built at one time were ponds that were fed by the L. A. River. These ponds were used to filter water underground from the river. The new reservoir is planned to replace the old outdated Silverlake Reservoir. The land under it has little or no pollution. Divert the rivers water there, thereby maintaining the mandated water levels and allow it to filter down into the ground. There have been few industries north of the reservoir and… Read more »

Stormwater capture is a priority (one of many local supply plans) and there are multiple projects across the LA and San Fernando Valley basins to capture rain flow. The problems arise when you look at ROI: Retrofitting a residential yard into a raingarden, or converting streets to incorporate permeable surfaces, has to be measured against the cost of the water supply benefit. The ratepayers advocate and the city council look very closely at these projects to ensure the money is being spent wisely. There is a lot of support from environmental groups but the economic benefits are distant and less… Read more »

Israel’s desal program is massively subsidized by the government and the water consumers there do not pay market rates – there is also the issue of the wager grabs from the West Bank which offset some of the economic cost of their water supply. Israel’s true cost of water is not the rosy picture some boosters make it out to be. Why don’t you use ocean water to shower, or water your lawn with, if it’s so plentiful? See how that works out for you 🙂 Desalination is cost prohibitive compared to imported water (from The Sierra Nevada or Rocky… Read more »

Industry uses 90% of the water. Tell me, why is it that submarines can desalinate dirty water and live on it for months at a time, yet we can’t figure that out here? Israel has had working desalination facilities to deter drought for years. When is someone going to ask Dept of Water & Power to start using the money we give them to provide actual WATER?! Instead they provide bloated pensions for themselves, easy work schedules with little accountability, and demand new restrictions for the taxpayers as if our 10% usage will affect the drought! I paid for my… Read more »

A giant source of water especially in the winter months are the massive amount of water surging down the L.A. River into the ocean. Why hasn’t the river been dammed and said water stored in reservoirs that can be used to percolate into the ground and recovered from underground springs?

yes to all comments above! also, how about citations for excessive watering, like I see in my neighborhood every day? and how about abandoning grandiose dreams of a “Great Lawn” in Plummer Park instead of old growth trees and historic buildings?

use pebbles and slate as rock gardens rather than grass. all should be doing that at the curb level anyway!