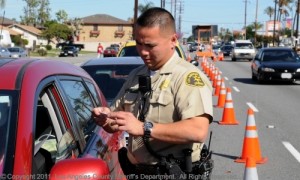 Seven drivers were arrested this past weekend at a driving under the influence / driver’s license checkpoint in West Hollywood staged by the Los Angeles County Sheriff’s Department.

The checkpoint, on Fairfax Avenue just south of Santa Monica Boulevard, was held between 7 p.m. Friday and 3 a.m. Sunday. The Sheriff’s Department routinely stages such checkpoints as part of an effort to deter driving under the influence.

Sobriety Checkpoints: As unconstitutional as the NSA searching all your emails and just as legal.