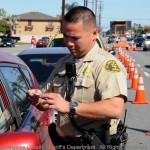 The Los Angeles County Sheriff’s Department will conducting a DUI/driver’s license checkpoints on Friday in  West Hollywood. The checkpoint will begin at 7 p.m. Friday and continue until 3 a.m. Saturday.

The Sheriff’s Department e-mail announcing the checkpoint did not specify where in West Hollywood it will be conducted.

“The deterrent effect of DUI checkpoints is a proven resource in reducing the number of persons killed and injured in alcohol or drug involved crashes,” the e-mail said. “Research shows that crashes involving alcohol drop by an average of 20 percent when well-publicized checkpoints are conducted often enough …

“When possible, specially trained officers will be available to evaluate those suspected of drug-impaired driving.  Drivers caught driving impaired can expect jail, license suspension, and insurance increases, as well as fines, fees, DUI classes, other expenses that can exceed $10,000.”

DUI checkpoints are unconstitutional. Citizens are supposed to travel without harassment. It completely violates the 6th Amendment of law biding citizens. I guess no one cares?

And they also use deception to ‘trick’ you to giving up the 6th amendment.