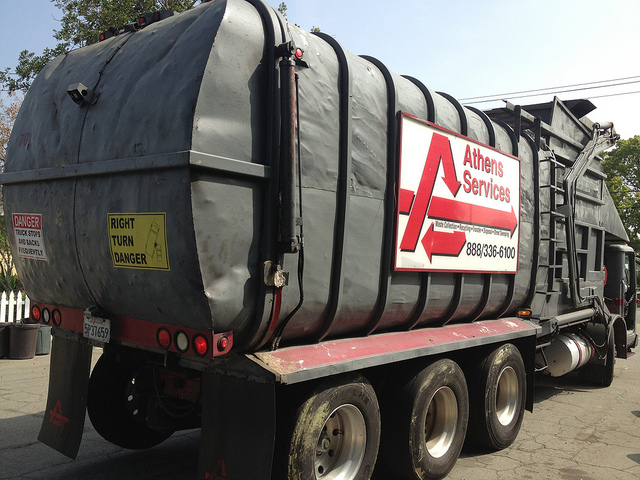 The West Hollywood City Council tonight will consider whether to extend the city’s trash collection contract with Athens Services for 15 years without soliciting bids from competing vendors.

It’s a decision with major implications for local homeowners, apartment and condo building owners and businesses. That’s because they will be required to pay Athens for trash pickup services. By contrast, contractors demolishing existing buildings and erecting new ones are permitted to use any of five other trash pickup companies with which the city has a contract.

Athens, based in the City of Industry and controlled by the Arakelian family, has had a contract with the city for “waste management,” aka trash pickup and disposal, since 2004. Under the current contract, Athens pays the city a fee equal to 10 percent of the revenue it receives from businesses and home, apartment and condo building owners. That fee was $918,000 in 2013, which meant that Athens billed its West Hollywood clients $9,180,000 that year.

In 2011, Athens proposed extending its contract, which expires on June 30, 2016. It revised the offer in January, proposing a number of options. Two options were to extend the contract for a fixed period of either eight or 15 years, at which point it would have to be renegotiated or put out to bid. Two other options proposed “rolling” eight- or 15-year contracts, which would automatically renew at the end of the contract period unless the city gave notice a year in advance of its intention to not renew.

The fixed contract proposals included rate increases of eight to 20 percent for apartment and condo building owners and 1.4 percent to 2.8 percent for owners of single-family residences, which the city defines as those with one to four-units.

Under the 15-year “rolling” or automatically renewable contract, Athens proposed no rate increase for its customers. Each of the contracts, however, called for Athens to take on other responsibilities now handled by city workers and other contractors such as street-sweeping, sidewalk cleaning and pet waste collection, for which it would bill West Hollywood an additional $480,000.

At a meeting in May of last year, Councilmember John Heilman and then-Mayor Abbe Land suggested the city put the trash collection contract out to bid to see if it could get a better proposal than the one that Athens was offering. Councilmembers John D’Amico, John Duran and Jeffrey Prang voted against that. D’Amico said he preferred to wait for an analysis of the Athens proposal that the city hired R3 Consulting Group of Roseville to conduct.

The revised proposal before the Council tonight was negotiated with Athens by R3 and members of the city’s Department of Public Works. It would divide the 15-year contract extension into three five-year periods, during each of which Athens would be required to meet certain goals.

Those goals include ensuring that a certain percentage of the city’s trash is recycled or otherwise diverted from landfills. The city is required to meet such “waste diversion” standards under state law. The law currently requires that 50 percent of the trash collected in a city not be placed in a landfill. That requirement will increase to 75 percent by 2020. State law also requires that all commercial customers and apartment and condo buildings in a city have access to recycling options.

The city now meets the state requirement that 50 percent of its waste not be placed in landfills. But it meets that requirement in part because vendors other than Athens who handle demolition and construction waste are included in the calculation. The city requires those vendors to put no more than 20 percent of the waste they collect in landfills.

The proposal negotiated by R3 and Public Works staffers with Athens that the Council will review tonight requires Athens alone to divert at least half of the waste it collects from landfills in the first five years of the contract. It will have to divert 60 percent in the second five years and 70 percent in the final five years.

The proposal also would require Athens to separate recyclable materials such as bottles and cans from other trash collected at apartment or condo buildings at Athens’ own “materials recovery” facility. Currently residents of those buildings are supposed to sort their own trash, putting recyclable materials in dedicated containers, “green waste” (food, grass, plants) in other containers and regular trash in a third container. The R3 Consulting report notes that there is a low level of compliance among apartment residents. Athens already sorts out those items for its commercial clients at its facility so that they don’t have to do the sort themselves. Athens also would have to provide a way for residents to drop off disposal florescent light bulbs for Athens to collect.

Athens would provide those additional services and meet those goals without being able to increase its rates beyond a standard increase tied to the Consumer Price Index during each of the first five years of the contract. In the second and third five-year periods, Athens could request an additional rate increase based on demonstrated increases in its expenses, which would have to be approved by the City Council. The revised proposal calls for the City itself to continue handling street cleaning, sidewalk cleaning and pet refuse pickup as it does currently.

The R3 consultants recommended the city continue to contract with Athens, arguing that the fees it charges West Hollywood businesses and residents are generally lower than the average rates in 30 other communities surveyed.

R3 also noted that Athens owns one of the few composting facilities in the region that is permitted to compost food waste. And R3 said that Athens also is one of only a few companies (others including Crown Disposal of Sun Valley and CR&R Waste Services of Stanton) that has a facility at which it can process and separate trash that includes recyclable materials and food and waste.

Athens and other trash collection companies in California have been pushing in recent years for longer contracts and automatic extensions, arguing that they need the assurance of future revenue to make the necessary investments in their facilities. Athens, for example, last year signed a ten-year contract with San Bernadino County in which it committed to put a minimum of 800,000 tons a year of solid waste in the county’s landfill, for which the county will be paid. That contract was necessary with the closing last year of the landfill in El Puente, the nation’s largest, which is where West Hollywood’s trash was hauled.

But the Athens relationship with its West Hollywood customers has been fraught. In 2008, Athens convinced the City Council to let it increase charges to local businesses by 40 percent more than allowed in its contract, citing rising costs. Athens agreed to implement the increase over four years if the city would extends its contract until 2016.

The West Hollywood Chamber of Commerce opposed that increase. But only Councilmembers John Heilman and Abbe Land voted against the increase, which was supported by Councilmembers John Duran, Sal Guarriello and Jeffrey Prang. Heilman argued that West Hollywood and Athens had signed a contract agreeing to a specific rate increase tied to the Consumer Price Index and should stick to it. And he noted that other trash haulers who bid on the contract had argued that Athens was offering an unrealistically low rate. The implication was that Athens underbid the other contractors with the idea that it would return and ask for an increase later.

Athens also is one of the city’s biggest political players, with the company, its officers and members of the Arakelian family making regular donations to the re-election campaigns of West Hollywood City Council members. The biggest beneficiary of Athens’ largess recently is John Duran, who voted for the 40 percent rate increase in 2008.

Duran has received more than $26,000 from the company, its officers and the Arakelians in the past two years. Arakelian family members donated a total of $13,500 to Duran’s unsuccessful campaign this Spring for the 3rd District seat on the Los Angeles County Board of Supervisors. In last year’s City Council election, the Duran campaign and a committee supporting him took a total of $13,000 from Athens and its officers. Athens donated $1,500 to Councilmember Jeffrey Prang’s race for L.A. County Assessor and $500 to his campaign last year for re-election to the City Council. It also donated $500 each to the successful campaigns of council members John Heilman and Abbe Land and the unsuccessful re-election campaign of Lindsay Horvath.

Athens also has been involved in a number of controversies in some of the 21 cities in Southern California where it handles trash collection and disposal. For example, in 1989 Ron Arakelian Sr., an owner and then its president, and his son Ron Jr. and two other employees pleaded no contest to charges by Los Angeles County District Attorney that they had conspired with PJB Disposal in Alhambra to not  compete with one another for customers and to rig their bids for trash collection services. Athens was fined $500,000, Arakelian Sr. was fined $20,000 and the other three employees were fined $10,000 each.

In 1994, a panel of the National Labor Relations Board found the West Covina Disposal and City Refuse Service, an Athens sister company, guilty of spying on and firing employees who it believed were involved in trying to organize a union.

The City Council will meet at 6:30 p.m. tonight at the Council Chambers at 627 N. San Vicente Blvd., south of Santa Monica.

@luca D? you still in this discussion?

So luca D do you think John Duran got $26,000 from the trash company just because they like him?

Good post luca d, I agree. How come the city is so well off, if everyone is so corrupt? Sheesh!

people are so paranoid. athens does a good job, and frankly, has acquiesced to all of city requests that meet the challenges of pushing ‘green’ policies. the facts are that the skeptics of this city contract seem to think there are dozens of providers of this service that could meet the demands of west hollywood. and here is a challenge; if you think the counsel members, any member, is lining his, or her pockets, PROVE IT. some of you take a great deal of satisfaction making snarky comments about the integrity of people in the public, but you never prove… Read more »

This should be bid out and given to the best bid. Too much ATHENS money in all the long term council members election campaigns year after year to not question this extension. I think ATHENS does a good job personally , but it should be up to a free market, not just the company who gave money time and time again to current long term council members selfish agendas not to let other residents serve, . I know that D’Amico has been disclosing the money he received from any parties involved on votes. I hope ALL the council members not… Read more »

Classic Duran…can you imagine the damage he would have done working at the county level?….just let his term limits run out in Weho and then he can fade away……..

Trash collection contracts without bidding is obviously not a good idea. However, as far as actual services go, a facility that sorts trash has shown to dramatically increase recycling– and not only because people are lazy. In my building of 14 units, we only have 2 recycling bins. It’s not enough, and recycling routinely gets put in the dumpster.

I have no comments on the contract renewal, but this article is excellent journalism!