City Councilmembers John Heilman and Abbe Land are asking West Hollywood to step up its efforts to create a bike sharing program by allying with an effort already underway in Santa Monica.

A proposal to be discussed at the City Council meeting tonight asks that WeHo engage the same contractor Santa Monica will hire to launch its bike share program. That contractor is expected to be chosen by this Fall.

A bike share program, in which bike users would pay a fee to use bicycles stationed at various racks around the city, has been a topic of discussion for more than two years at the Westside Cities Council of Governments, whose members include Santa Monica, West Hollywood and Beverly Hills, among others.

Santa Monica has received a grant of $1.5 million from the Metropolitan Transit Authority (MTA) and a grant of $500,000 from the South Coast Air Quality Management District to establish a bike share program. 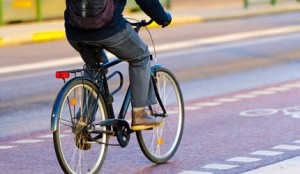 The MTA has said it wants to develop a bike share pilot program in Pasadena, downtown Los Angeles and Santa Monica near Metro rail stops in those areas. It has listed West Hollywood, which doesn’t have its own Metro rail stop, among cities for consideration later.

Such bike share programs, which are in place in San Francisco, Miami, New York City and Washington, D.C., among other places cover their costs by charging riders an annual membership and often allowing businesses to “sponsor” the program by advertising on the bikes or their racks.

The City of West Hollywood has worked to encourage the use of bicycles to reduce traffic congestion. But its efforts are hampered by the inability to create bike lanes along many blocks of major city streets and by the amount of car traffic. A 2012 study showed an average of 29 bicycle trips an hour on Santa Monica Boulevard in West Hollywood. The MTA sees bike sharing as a “first mile / last mile” program, allowing those using the subway or bus lines to get to a stop or complete their journey at the end of the public transit trip.

The Council meets at 6:30 tonight at the Council Chambers at 625 N. San Vicente Blvd., south of Santa Monica.