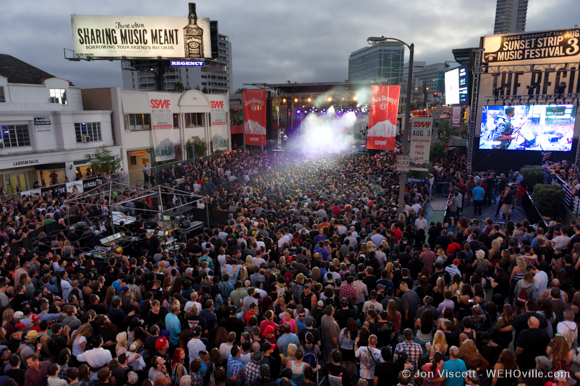 A report presented to the City Council tonight even suggests that the annual music festival, which launched in 2007, might be put on hiatus this year while its problems are studied. Councilmember John D’Amico said the report is “a fairly strong indictment that maybe what we’re hoping for is not going to be realized.” The Council named Councilmembers John Heilman and John Duran to a subcommittee to work with the SSBA on the issues.

A major issue, according to the report, is that the festival has grown more rapidly than has the revenue it generates. The city has contributed $540,000 to cover expenses related to police and fire services and erection of street barricades and has waived $46,400 in fees. The Sunset Strip Business Association (SSBA), which manages the independently incorporated festival, has paid $128,000 to sponsor it and loaned it an additional $360,000, a debt that it has forgiven.

The report cites several problems faced by the music festival:

The report says the SSBA and the city have agreed that a different management approach is needed. SSBA has decided to seek an established music festival production company to develop a plan to make the festival financially viable. The city report also recommends that SSBA consider broadening the scope of the festival to include art exhibits, fashion events and film screenings.

Another issue identified by the report is the failure of some businesses to pay the taxes assessed on them to support the SSBA. A business improvement district is financed by taxes levied by the city on its businesses, with the revenue from those taxes used by the BID to promote its members. The budget of the SSBA, which was established in 2001, has grown from $591,000 a year to more than $800,000 a year, with support from funding from sponsors of events such as the music festival as well as the BID tax.

The report says that the city was only collecting 80 percent of the assessed taxes until late last year, when it began notifying businesses that they were delinquent and giving them 30 days to pay. That effort has boosted collections to a four-year average of 92 percent. Now SSBA businesses, once $611,850 in arrears, are only $326,625 behind in payments. Businesses that don’t respond to city collection efforts face a legal claim or having their debt turned over to a collection agency.

Additionally, the Sunset Strip Farmers Market, which launched in 2012, saw a decline in average attendance from 600 people per week that year to 500 last year. The market is staged on Thursdays from May through October. A survey by the SSBA found that 90 percent of attendees live in the 90069 zip code area and more than a third attend the market two or more times a month. Those surveyed said they would like more vendors of fresh produce at affordable prices, more vendors of prepared foods and more options for parking. Revenue generated by the market comes from rental of booths by food vendors, beverage sales and sales of meals with partnering restaurants. The market’s losses, $249,977 in 2012, fell to $55,989 in 2013. The city contributed $50,000 last year to offset costs.

Dang, it sounds as if the Sunset Strip has become a money pit. It is unfortunate but the truth of the matter is that the Sunset Strip is no longer hip and indie, it is exclusive and corporate. We’ll just have to get out of the way of what it has become *sigh*

The “Sunset Strip ‘Farmers’ Market” is not a true “farmers market.” It quietly dropped “farmers” from its name a while ago. The handful of times I went there to produce shop were disappointing. The guy selling apples was acting like a carnival-barker. The other produce I purchased wasn’t fresh.