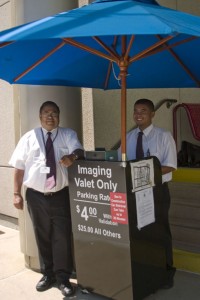 West Hollywood’s Department of Public Works is proposed changes to valet parking regulations that would open up parking spaces to individual motorists and likely increase valet parking charges at nighttime.

The proposal, set for a public hearing before the City Council on Jan. 21, would change the current system in which valet firms or the restaurants or bars that engage them pay a fee to reserve metered spaces during the daytime (8 a.m. to 6 p.m.) or during the nighttime (6 p.m. to 3 a.m. the next day). The fee now is $2,880 for each parking space reserved for daytime use by the valet service. The fee is $900 for each space reserved for evening use, except for those on Sunset Boulevard, where the charge is $2,440 per parking space.

The Public Works proposal would have a valet service or restaurant or bar pay for specific hours during which it intends to use the metered parking spaces, with a minimum period of four hours a day and a minimum period of four consecutive days. The amount paid would be determined by a calculation that takes into account the parking meter rate and number of hours that metered parking is enforced in a given area. The effect would be to encourage valet services to make metered parking spaces available to motorists when they aren’t actually using them.

The Public Works staff calculated the effect the change would have on businesses at various times of the day and various locations. It estimated that a restaurant serving lunch, which typically needs valet spaces from 11 a.m. to 3 p.m. but now must pay $2,880 for each space for an 8 a.m. to 6 p.m. period, would pay only $1,637 if it rented the space seven days a week.

On the other hand, restaurants and bars that cater to night-time customers would pay more. A bar or restaurant on the city’s West Side that needs parking from 6 p.m. to midnight would pay $1,982 if it rented a space seven days a week. It now pays $900. A Mid-City bar or restaurant would pay $1,546 and an East Side restaurant would pay $1,109 for each space it now rents for $900 a year. Bars and restaurants on Sunset Boulevard, which already pay a higher rate, would see less of a financial impact. The Planning Department estimates a metered space reserved from 6 p.m. to 3 a.m. would cost $2,719 as opposed to the current fee of $2,440.

The Planning Department also argues that, even with the proposed fee increase and change in calculating fees, valet parking will be less expensive in West Hollywood than in other nearby cities. It calculates that the annual cost to a business for two spaces to handle valet parking in West Hollywood would average $4,865. That includes the annual valet license fee of $200. By comparison, it calculates an annual fee of $15,309 for Santa Monica, $15,364 for Beverly Hills and $7,835 for Pasadena.

If approved by the City Council, the changes would take effect July 1 next year.

It also explains why the Council expanded the hours of meter enforcement.