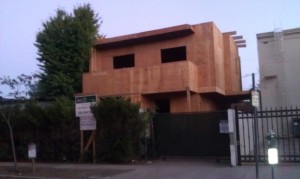 With West Hollywood West residents complaining about the number of new boxy, modern two-story homes going up in their neighborhood, the West Hollywood City Council Monday night unanimously approved an interim measure calling for greater review of the house designs before approval.

Mayor Abbe Land and City Councilmember John D’Amico introduced the measure after 75 residents voiced concern about the new houses during a neighborhood meeting held on Dec. 3. At that meeting, residents said the new houses lack any aesthetic appeal and look like commercial buildings.

The measure requires city planners to consider compatibility with existing houses when approving new houses proposed in the neighborhood. West Hollywood West is made up of approximately 1,000 single family homes and duplex apartments in the area bounded by Doheny Drive and La Cienega Avenue on the west and east and Melrose Avenue and Beverly Boulevard on the north and south. Most of the houses there were built in the 1920s and 1930s.
In considering compatibility planners will decided whether the size is appropriate for the neighborhood. The measure also says that front doors should be visible from the street, windows should be of a similar size to those in neighboring homes and high quality building materials should be used. To insure privacy, roof decks and side balconies are discouraged.

“The repetitiousness of the big box is the biggest offense,” Giesbret said during Monday’s council meeting.

Councilmember John Heilman called on city staffers to contact the people buying these new homes to find out why the homes are attractive to them.

With the council’s action, the city’s urban designer, Stephanie Reich, now has the power to request changes to designs.

The city’s planning department also is exploring more permanent solutions to the boxy, modern house problem, including possibly creating a historic preservation zone for the neighborhood that would ban such houses or a moratorium on construction of single family homes until new design regulations are finalized. Those options will be presented to the West Hollywood West residents in the spring.

The true history of our architecture can be found with the Schindler House, a beautiful box predating the city by decades: http://www.makcenter.org/MAK_Schindler_House.php, or with the many Frank Lloyd Wright homes in the area. Both are more in-line with the big boxes that the sad, cookie-cutter, stucco dinosaurs around the area. The proposed measure requiring front doors to be visible from the street violates Wright’s style. Small windows destroy the ability to soak up the magnificent natural light here. If the proponents of this measure want to live in Kaufman & Broad atrocities, there are plenty of Del Webb’s that will… Read more »

Sean, EXACTLY! These are just a bunch of rich homeowners trying to play Design Police. We should be grateful people want to build in West Hollywood.

Before these “box” homes were built, the tear downs (homes not in reparable shape) were selling for $600,000, now because of the success of the contemporary design, the same outdated, dilapidated homes are selling for 1.2 million to tear them down. Hate these houses all you want they bring a lot of value to the neighborhood. Also, have you been inside your neighbors Spanish home built in the 30’s and 40’s? See anything similar? They used 3-5 basic floor plans and created the same house over and over again back then, using the same tiles and the same floors.

My home on Huntley is on the west side of the street close to Sherwood. The Red Building stole a chunk of my privacy.. (well if it had a tenant).. Huntley used to be an R4 zone, downgraded to R2 25 years ago. The downgrade came when the PDC began construction to ease congestion while the project was being built. Now 25 years later they should upzone the area back to R4 since all 3 phases of the PDC construction have finished.. BEFORE that MTA towers over our heads and depreciates the property values that border it. There are different… Read more »

You raise a burning question. I asked myself the same thing. Doesn’t add up does it.

Why is it that they are okay with putting ultra modern in the historic area of Plummer Park? Double standard?

Beauty is in the eye of the beholder but as Leslie mentioned they are obviously being built by the same developer who probably paid a sub-standard architect once for plans and is now mass producing them throughout the area. Why should this developer make a killing while destroying the aesthetics of the area and not be required to give back with thoughtful design,building and planning. These homes have overtaken many nearby neighborhoods not just WHW. The city should impose stricter guidelines and impose height and density restrictions and landscaping requirements. City Council is finally on the right track. I hope… Read more »

Brandon: Have you registered to receive emails from WHWRA? I received emails about the December 3rd meeting and possibly a flier.

It became clear at the meeting that the homes at issue are being built by the same developer using the same plan with minor variations. With the exception of one resident, the residents were unanimous in their concerns.

The question isn’t whether these spec homes are modern or not, but their sameness and imposing size, which overwhelms the small lots and affects not only the value of neighboring property but their privacy as well.

There’s nothing creative about about developers building spec home boxes. Why in the world would a single family home be built to go with the Design Center? This is one time the city council listened to its residents.

Further proof that people in West Hollywood are focused on small potatoes issues rather than thinking big picture. Who the hell cares if your neighbor is building an ugly house. Their land, their money. Get a life you nosy nitwits.

Ridiculous, now the creative city is regulating creative designs.. and dont those square lines go very well with the motif of the Pacific Design Center? I live in a spanish style house in West Hollywood West and the real estate agents tell me that my style is not as desirable as the new modern homes. The West Hollywood West Association did not contact me, send a flyer, do a survey or speak for ME!