Cohen Brothers Realty Co. staged an informal presentation tonight of its concept for a complex on the south side of Santa Monica Boulevard near San Vicente that would include a hotel, a shopping center, apartments, a movie theater, an 800-seat open amphitheater and  a 50,000-square-foot sheriff’s station.

The 10.4-acre site, currently occupied by an MTA bus depot, also would include a garage for the storage of MTA buses.

The presentation, held in the lobby of Cohen’s Blue Building at the Pacific Design Center, featured illustrations of what the complex might look like and an argument for how it would benefit West Hollywood.  The complex would have the potential to “activate a key section of Santa Monica Boulevard,” the presentation said.  Other possible advantages cited included generating jobs and sales and hotel occupany tax revenue, reducing the noise from the existing bus depot, providing space for new restaurants and stores, attracting more visitors to West Hollywood and perhaps serving as the site for a new City Hall. 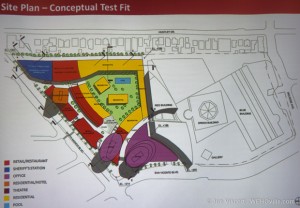 A story in WEHOville in February revealed that Cohen Brothers had signed an agreement  that gave it the exclusive right for two years to negotiate with the MTA a plan to build the massive complex, which would include two high-rise towers, 600,000 square feet of residential/hotel space and 120,000 square feet of retail shops.

Of the several dozen people who attended the presentation, objections were raised mostly by residents of houses on nearby Huntley Drive, who worried about the traffic the project would generate.  The project would have to be presented to the City of West Hollywood for approval.  The Los Angeles County Board of Supervisors would have to sign off on Cohen’s proposal to acquire the current location of the West Hollywood sheriff’s station.

WeHo needs more publicly accessible OPEN SPACE in this area. The WeHo Library and parking structure “improvements” to the park on the other side of San Vicente have impinged on what was freely accessible public space with concrete jungles and towering war-grade security gates. Therefore, SOMETHING BETTER is needed above ground other than that MTA bus depot. I HATE this Cohen Brothers design. The City may not have the money to purchase this property outright. Therefore, a good middle ground would perhaps be a public/private arrangement (a la Zucotti Park in NYC) but with mixed used residential/commericial. But a more… Read more »

The only way Weho could benefit is to limit business to independent shops that support the local economy and people who live there. You certainly don’t need another Macy’s or Bed Bath and Beyond that are a few blocks away.

Out of town developers using the #weho monopoly board to to cash in on as much money as they can make and the quality of life of the residents is slowly sold away,
With a city council full of long term incumbents that have been the recipients of major donations thru the years….look like this .

How much did the Cohen Brothers and or those involved in this project donate to all the incumbents re-election campaigns?

I live just four blocks north of the project and I fully support it!
It’s about time we redevelop that “dead zone” of Santa Monica Boulevard. I would love more restaurants options, a movie theater and more shopping just blocks from my home.
I don’t particularly like the renderings..I find the layout and design very boring and uncreative. I hope that gets developed more before it moves forward.

Just looks like more traffic and congestion to me. Goodbye Boystown–

Now I’m curious who Cohen Bros supports for County Board of Supervisors.

With all the new development proposed for WeHo, such as Studio One / Factory being replaced by a hotel, WeHo could become another Chelsea in Manhattan, where all the gay nightlife was priced out of the market, replaced by upscale boutiques.

Just getting in and out of that place during the PM rush hour will be a pain. The traffic heading east in the evening is one long continuous line of cars. I cannot see why a development of this size would even be considered. This neighborhood was never designed for such a large development. And, as far as I can tell the red building in The PDC is still empty. One can talk about improved mass transit all they like but busses still use the same streets as cars. If and when a subway gets built under SMB it will… Read more »

People, do you honestly think Target and the like are going to be putting in ANOTHER location when there are two within a mile of this development? Get a grip. The theater is a welcome addition as would be more retail clothing that isn’t the cookie-cutter crap for the Bridge & Tunnel and IE/OC crowd that Block and LASC and Andrew Christian sell.

I am startled to find myself in agreement with Lucas, that a ban on formula-retail would actually be quite nice in this space. It would be nice to see some locally-owned businesses. As far as gridlock goes, that can certainly be mitigated by taking advantage of the walkability of the location (which certainly is not residential), and with improved transit service. Just this week a study showed that the Expo line is significantly reducing car usage. There’s going to be a Metro facility as part of this development, for Pete’s sake, so you couldn’t ask for a more transit-ready project.… Read more »

Instead of building a parking garage under Plummer why not take the bond money and build a platform park over the bus depot? Given Cohen Brothers remarkable failure at finding even one tenant for the Red Buildings I am flabbergasted that the city agreed to give them a two year exclusive to negotiate a deal.