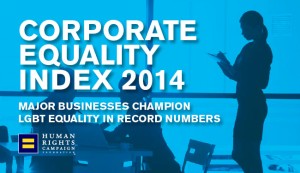 Eight of 17 companies headquartered in Los Angeles County and on the Fortune 500 list of the nation’s largest scored perfect ratings in the Human Rights Campaign‘s 2014 Corporate Equality Index.

The index is an annual ranking by HRC, the nation’s largest gay rights organization. HRC deems the top ranked companies as the most friendly places for LGBT people to work. To achieve a top ranking, a company must:

2) Require its contractors to abide by its non-discrimination policies

3) Not make donations to non-religious organizations that discriminate on the basis of sexual orientation or gender identity.

Eight companies headquartered in Los Angeles County were ranked at 50 or less. Those on the bottom were Molina Healthcare Inc. of Long Beach, a health insurance provider, and Reliance Steel & Aluminum of Los Angeles, a manufacturer of metal products, both with a ranking of 15. Ryland Group Inc. of Westlake Village, a homebuilder, got a ranking of 20. Dole Food Co., of Westlake Village, supplier of fresh and packaged fruits and vegetables, Edison International of Rosemead, the utility company; Occidental Petroleum of Los Angeles, the oil and gas company, scored 30.

Molina and Reliance scored their 15 points for barring discrimination based on sexual orientation. However neither offers any other rights or benefits included in the HRC assessment, include health or medical insurance coverage to partners of its employees in sax-sex relationships or health insurance coverage for transgender issues. Nor does either bar discrimination based on gender identity or sponsor a company diversity group.

In this latest index, 304 businesses achieved a top rating of 100 percent compared to only 13 when the HRC published its first index in 2002.

Chad Griffin, HRC’s president, noted progress in granting LGBT rights in corporate America. “More Fortune 500 companies implemented inclusive workplace non-discrimination policies than ever before,” he said in a letter released with the report. “…91 percent provide explicit protections on the basis of sexual orientation and 61 percent on the basis of gender identify, an historic high. Sixty-seven percent offer same-sex partner benefits, another record, and there has been a remarkable rise to 28 percent in essential health-care benefits for transgender employees.”