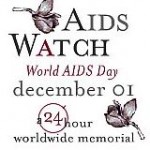 AIDSWatch presents one name, one memory, one life at a time, appearing on a black screen in stark white letters. The AIDSWatch roster consists of 24,680 names individually shown for about 3.5 seconds, the length it takes to take one breath. Residents and community members who have lost family or friends to AIDS are encouraged to include them in the AIDSwatch roster. AIDSWatch was launched in 1996, on the ninth World AIDS Day, by David Reid.

The public is invited to contribute names of people to whom they would like to pay tribute on AIDSWATCH. Names may be added at www.aidswatch.org.

World AIDS Day is held on Dec. 1 each year, providing an opportunity for people worldwide to unite in the fight against HIV, show their support for people with living with HIV, and to commemorate people who have lost their lives. This year will mark the 25th anniversary of World AIDS Day.

Thank you! I had the humbling honor of working on the first remembrance in 96 while visiting my brother Neil and my brother in heart David Reid. David is such an awe inspiring genious. He is so talented. When he first explained AidsWatch to me and I saw an excerpt of the feed; it brought me to tears. I would see a name. knowing they were gone from this earth. some famous. some were only remembered by those that loved them. and some gone too soon. but all glued together forever by this killer. now people can celebrate those gone… Read more »

25th Anniversary of WAD, 18th Anniversary of David Reid’s AIDSwatch. Time flies when your….dying. David’s creation is a pretty fascinating, moving, even stunning in a slow-burn kinda way piece of art. It is an oddly spiritual and simplistically complex sorta way to remember friends, foes and lovers gone. I find myself spacing out at it quite a bit trying to reconcile something is just not finally reconcilable. Good for WeHo, WeHoVille, AHF and others to publicize AIDSwatch and in turn, World AIDS Day. Most of us don’t truly have the power to forget. Gawd knows I’ve tried. So this is… Read more »