At least part of the West Hollywood City Council’s meeting Monday night is likely to be standing room only, with the council finally addressing an appeal of the Historic Preservation Commission’s recommendation that the former Tower Records Building not be designated a local cultural resource.

Jerome Cleary filed a petition appealing that decision in August, which the council accepted for a hearing on Nov. 4 that was postponed. The building, at 8801 Sunset Blvd. near Larrabee, housed the first Southern California location of Sacramento-based Tower Records. The Guinness Book of World Records in 1974 said it was the largest record store in the world. It closed in 2006 with the bankruptcy of its parent company, which failed with the advent of music that could be downed online.

As of today, Cleary had 1,782 signatures on an online petition in support of the designation, with relatively few signers from West Hollywood. The Historic Preservation Commission voted unanimously in April to deny the designation, saying doesn’t the building doesn’t meet state and National Register standards for a designation of cultural significance and that it does “not appear to retain sufficient integrity to convey its cultural and social significance and its association with Tower Records.” The Commission was referring to the fact that the iconic yellow and red facade of the store has been painted over. 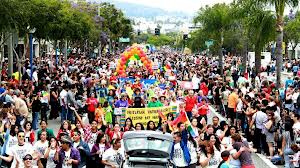 Also on the council’s agenda is a report from the city’s Gay and Lesbian Advisory Board regarding its public hearing on Oct. 30 on community concerns about the operation of the annual LA Pride Parade and Festival. The reports summarizes comments by 55 people who attended that meeting. Among the recommendations they made was that the event have higher caliber grand marshals and entertainment, that participation by transgender people be increased, that the festival be made free or less expensive for those who cannot afford the $20 ticket price, that there be less of a focus on alcoholic beverages and that Christopher Street West, who stages the annual event, be more transparent about its finances. Speakers also argued for branding LA Pride as West Hollywood Pride. 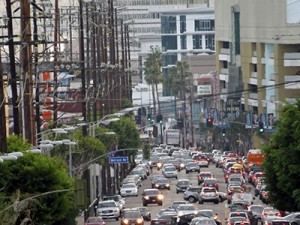 The council also will take up a proposal by Councilmembers John D’Amico and John Duran that traffic control officers be stationed at seven heavily trafficked intersections on Santa Monica Boulevard to improve the flow of vehicles. And it will be asked to provide direction to the city’s Department of Public Works regarding the exhibition of non-government flags. The city currently displays the flags of the United States, the State of California and the City of West Hollywood on City Hall. It has displayed the Transgender Unity flag on a flag pole behind City Hall and in front of the West Hollywood Public Library during November, which is Transgender Awareness Month. It has replaced the POW/MIA banners on poles behind City Hall and the city flag in front of City Hall during June with the rainbow flag, which symbolizes LGBT rights. The city has been asked by members of the Lesbian and Gay Advisory Board and by Larry Block, owner of the Block Party clothing store and a 2015 council candidate, to put the rainbow flag on permanent display in various locations.

The council meeting will begin with a closed session at 5 p.m. that will include a council evaluation of the performance of City Manager Paul Arevalo. The public meeting begins at 6:30 p.m. at the council chambers at 625 N. San Vicente Blvd., south of Santa Monica. The full agenda is available online.

Be careful what you wish for with the Tower records site. Remember back to the very large crowds when someone would be there to promote a record or concert. Think of the size of the crowds today with social media we have already seen it at malls around the country and even recently on Hollywood blvd ….West Hollywood has enough problems dealing with crowds when someone burns to death in the street as people stand by and watch and dance and then even torment the man after he lay dead in the street. It is not the same world and… Read more »