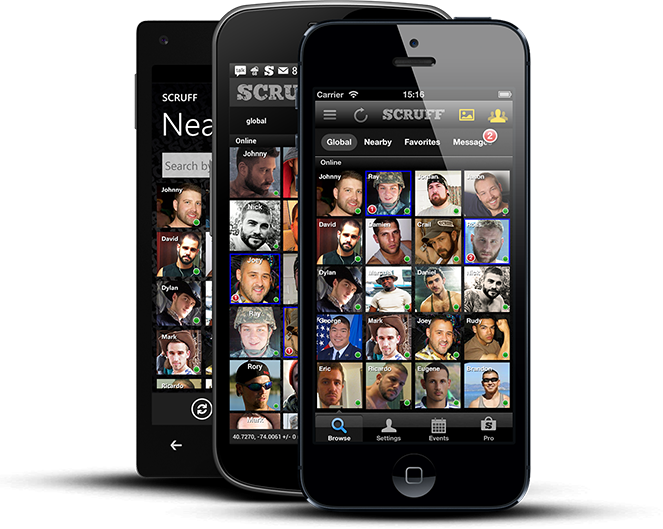 Maybe you’re looking for “the One,” AKA the guy you want to marry, adopt kids with and share that expensive little bungalow in WeHo’s Norma Triangle. On the other hand, perhaps you’re just looking for a one-night (er, one-hour) stand. Or you’re one of those guys in a long-term monogamous relationship who — at 3 a.m. on a Saturday? — is simply cruising online for someone to have coffee with.

Since the launch in 2009 of Joel Simkhai’s Grindr, dozens of mobile phone apps have been developed for all that — Scruff, GROWLr, Jack’d, Mister, A4A, Recon, Manhunt, BBRTS, Get Male and Hunters BBS, to name just a few. Some are mobile versions of online sites. Others — the most popular by and large — are mobile only.

The basic versions are all free, and all offer additional features for a price. While they share the common goal of helping you get married or laid (or finding that late night coffee mate), they vary, sometimes dramatically, in their tools for doing so.

For example, if you’re planning a trip to New York City and hoping to find a new “friend” for a night out at the Eagle on 28th Street, you’ll find Scruff more useful than Grindr. It lets you search by location and chat with gay guys around the world (in homophobic Moscow — that’s Moscow in Russia, not Idaho — there were 134 gay men on Scruff at 7 a.m. PDT recently.)

And if you want to be discreet in sharing your photos with online strangers, you might lean toward Grindr. While any geek can do a screen shot of a pic that has been posted or sent his way, Grindr photos can’t as easily saved to a stranger’s cell phone album as can those from the private Scruff album that you unlock for someone you don’t really know. That means a Grindr user is less likely to find his friends pointing at him and guffawing at a cocktail party as they pass around a cell phone showing him in flagrante delicto.

As a service to its gay readers, WEHOville decided to try out a few of the most popular gay mobile apps on the market and tell you what they offer. (It was a tough job, but someone had to do it. And our rater has been desperate for one of those 3 a.m. cups of coffee with a monogamous guy in a long-term relationship. He lives only three blocks from iHop, which serves coffee 24/7.) We hope you, dear readers, will offer your own opinions as to the strengths and weaknesses of these apps in the comments section below each one. And let us know of any popular or exceptional apps that we may have missed. We’re also offering up a service to translate often undecipherable app language. And we couldn’t resist sharing with you some of the more hilarious profiles we’ve found on line (in searches conducted only as part of work, of course).

Click on the logos below to read our take on the best gay mobile apps.

For those of you who find gay app speak indecipherable,
click on our Digital Dictionary for some help.