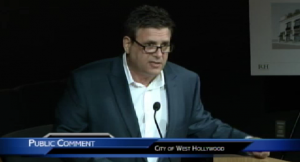 Larry Block, an announced contender for a seat on the West Hollywood City Council in the 2015 election, asked the Council Monday night to adopt four political campaign reform measures. One of those would require sitting council members to resign their seats if they decide to run for another office.

Councilmember Jeffrey Prang has announced that he is running for the LA County Assessor position. Block said last night that Councilmember John Duran is running for the LA County Supervisor seat held by Zev Yaroslavsky. Duran confirmed that he is considering such a run. If both council members run, all five council seats will be up for election in 2015.

Block also asked that city contractors be barred from contributing to City Council election campaigns, citing a donation of $10,000 by Athens Services to a campaign committee supporting John Duran. Athens has asked that the city extend its lucrative and exclusive contract for collecting trash from West Hollywood business and apartment buildings by an additional five years without putting it out to bid.

During the council meeting, Duran responded to Block saying “The maximum contribution to any campaign is $500 not $10,000. So, I know he (Larry Block) gets very passionate about the things he likes to speak about, but it doesn’t allow him to say things that are not true. So I wanted to make that one correction to the record.”

While West Hollywood campaign finance laws limit contributions to $500 to any one candidate, campaign committees to support a particular candidate that are supposed to operate separately from the candidate’s own campaign can solicit contributions in excess of the $500 limit.

City campaign finance reports show that Athens made a $10,000 donation on Feb. 20 to the “Friends of West Hollywood” committee supporting Duran’s re-election efforts.

Block also asked that the city bar campaign consultants from lobbying the council during for 12 months after an election in which they are involved as consultants. And he said that Prang should not be allowed to hire Steve Afriat to manage his campaign for the county assessor seat. Afriat is a lobbyist and campaign consultant who has managed the campaigns of four of the five sitting council members (John D’Amico is the exception) and also represents businesses that bring issues before the council.

Finally, Block said the council should require any council member to recuse himself from voting on an issue involving any person or business who donates more than $500 to the council member’s election campaign.

Nine candidates and various political action committees contributed $422,000 in the campaign for two seats on the council last March, which incumbents Duran and Prang easily won. The majority of contributions to the incumbents came from people and commercial establishments outside West Hollywood with a business interest in the city such as real estate developers and billboard companies.

I am agree with Shawn ,Finally a resident exposes the payola that’s run rampant in WEHO city council members operations. Weho democracy is Broken. Amazing gratitude to Larry Block for caring about our city and taking a stand!

You are so right. The WEHO five need to be investigated by the FBI. That’s happened with the LA City Council and now is the time. Duran, Prang along with the rest … HAVE SOLD OUT TO DEVELOPERS. THEY ARE SO OVER!

I believe Mr. Block cares more about this city than his pocket book. He’s not a typical politician and I agree that he may be what this city needs.

Larry is exactly what WeHo needs…a no-nonsense, tell it like it is kinda guy. He will have my vote and support in his bid for a council seat!

Finally a resident exposes the payola that’s run rampant in WEHO city council members operations. Weho democracy is Broken. Amazing gratitude to Larry Block for caring about our city and taking a stand!

and who does Mr. Duran think he’s fooling by claiming technicalities? the fact is that Athens donated $10,000.00 toward his re-election.
when we talk about ethics reform it makes no difference through which legal mechanism a city contractor sponsors a council seat.

so the “special committee” (Prang/Heilman) have supposedly finally met to “discuss the issue” and come up with NOTHING? anyone surprised? kudos to larry block, for showing leadership on council ethics and campaign reform that the council itself seems to utterly lack.

So basically Duran and received those monies to his campaign. Kudos Block for putting this forward.

Calling out the issues before they become bigger issues is smart. Obviously Mr.Block cares passionately about his position. He has my vote.

About time somebody noticed the obvious flaws in the system. Lobbyists in West Hollywood is pretty much hypocritical to the very core this City was founded on. Cheers to Larry Block for taking them on.

Is he the 6th councilman?

I think Mr. Block
is on the right track.