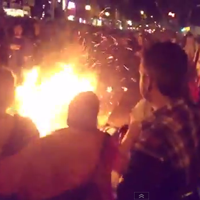 A relative of the man and sheriff’s detectives are asking people looking at the Internet video for clues as to how the man, Gilbert Estrada, who died at Cedars-Sinai Medical Center Friday morning, became engulfed in flames during a concert in the middle of the street. A detective with the Los Angeles County Sheriff’s Department says the incident looks to be an accident caused when the man tried to light a cigarette and set his costume on fire.

The video shows Estrada, who appeared to be barechested, standing on the roadway, cloaked in flames. He then moves onto the grassy median of the boulevard, where he collapses.

As the surrounding crowd whooped at the spectacle, the man spun on the ground, flames reaching five feet in the air.

Warning: The video below is very graphic and includes swearing.

Why would you post a You Tube video on this site that is so horrific! Unbelievably disrespectful to this poor soul and his family and friends

City of West Hollywood spends over $400,000.00 on the annual Halloween party every year.
Time to send it back to Hollywood Blvd and use the money to help the homeless that are sleeping and starving in West hollywood. West Hollywood should hang their heads in shame with the boisterous crowds that come here for the “parties”.

Roslyn, this city does more than most for the homeless. To say that they should do this and not that is ridiculous. There is a lot of money made in the city on Halloween, you forgot to mention that part. Maybe you can sell all your possessions and give the money to the homeless.

The people dancing around the man on fire really made me sad. They were more concerned about getting it on camera than helping the man 🙁

I thought the same thing too, but I bet they really did not understand what was going on, because it happened in an instant, and I am sure they thought it was some kind of Hollywood magic. It is sad though, and I am glad they posted it here, because I was able to understand the situation better. Poor guy.

OMG, Stephanie, apparently you have never been. A very uninformed response to this story. There is virtually no problems, and that is exactly why it is so popular and does go on every year. This was definitely a very freak accident of some sort.

Just seems like more negative than good happens at these carnivals. Something to think about before having the next one.