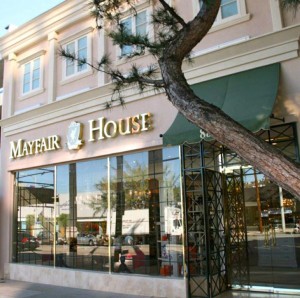 Mayfair House, a specialty clothing and accessory store, filed a lawsuit in federal court Wednesday against the City of West Hollywood seeking to have the city’s fur ban declared unconstitutional and void, according to a statement from the store’s law firm.

The 18 page, five-count complaint asks the court to permanently order WeHo to stop enforcement of the ban.

“The ordinance is an ill-considered and illegal law that is harmful to the city, its consumer citizens and business residents,” said Johanna Judah, owner of Mayfair House at 8844 Beverly Ave. near Robertson. “It was passed by city councilmen who have the political support of national animal rights activist groups who wish to impose their will over others despite the unconstitutional nature of the ordinance.”

Michael O’Connor, a lawyer in the L.A. office of Kelley Drye and Warren, which filed the complaint on behalf of Mayfair House, said, “It is crystal clear that California’s constitution grants the state legislature the only authority to enact legislation relating to the protection of wildlife, including the exclusive power to pass laws regulating the market for products of wildlife, such as fur.”

Last week, industry group Fur Information Council of America (FICA) also said it planned to file a complaint in an effort to block enforcement of the ban, which was passed by the West Hollywood City Council in 2011 and took effect Saturday, Sept. 21.

FICA Executive Director Keith Kaplan said that the agency has received calls from local retailers who have questions about the ban, which he called “ill-conceived and lacking appropriate research.”

“We support Mayfair House’s determination to have the ordinance overturned and to protect the rights of businesses and consumers,” Kaplan said in a statement. “We too are committed to the overturning of the ordinance and will support any and all efforts by injured parties. Animal activist groups and their followers cannot be allowed to foist their radical ideas on the rest of society.”

West Hollywood has 21 days to file its response to the complaint, according to the law firm.

John D’Amico should be recalled for coming INto our city and bringing bringing in animal activists from OUTside our city to focus on Fur, while ignoring real issues in our community. BTW, any idiot knows the leather is the same thing as fur, with the fur shaved off….. hello!

I cannot believe what I am hearing. Looks like some groups have nothing better to do. How in anyone’s right mind have the right to ban Fur garments or soon to be anything made from Leather or all kinds of Meat. I just was informed of PETA’s con game. If you want to see the violence to animals. Go to: PETAKILLSANIMALS.COM .. You will see the truth. Even though ths ban will not fly. If by chance it did, we are on our way to a form of communism in this country.

Seriously??? This “law” is crazy. Who even concocted such an idea? West Hollywood has thousands of human homeless people and this is the priority their ignorant City Council puts thought into? How can there be a ruling taking away the freedom from purchasing a legal item sold in a retail store? Cigarettes are proven to cause diseases, alcoholic beverages disorient people who drink and elective cosmetic surgery is cruelty to people. Will West Hollywood stop these things from being sold in their City? Fur is fashion. The government regulates fair trade on all fur products sold in the USA. Whoever… Read more »

Next they’re going to legislate that restaurants cannot serve MEAT? Next it will be Chicken and Fish? What business is this of City Council? Stay out of peoples personal lives and let them make their own CHOICES! Geez, Freedom of Choice if you’re on a parade float in a G-String, but if you walk into a store, then City Council tells you what you can or cannot buy. What a waste of our money, our time, and an insult to our intelligence. THis has nothing to do with animals, and everything to do with government corruption.

Although most of the individuals who advocate against fur are sincere and well intentioned, some of the organizations to which they belong are hypocritical in their deeds. The West Hollywood Chamber of Commerce had advocated for an acceptable, reliable, “origin-assured” and educational approach to this issue which would not necessarily have arbitrarily excluded certain product categories. This approach would teach consumers about the issues involved and provide them with humane, sensible choices rather than to take a “forced feeding” or moralistic tone in restraint of commerce. This is still an option if cooler heads prevail. In the meantime, City Council’s… Read more »

The USA would like to congratulate Mayor John D’Amico and his city council for their attempt of taking away West Hollywood’s freedom of choice and freedom to do law abiding business. Using their hand in hand love affair with the small but vocal animal right’s minority, they have deemed that selling fur should be against the law in West Hollywood. In their hypocritical wisdom, it’s okay to sell furs that are second hand and that can be used as home decoration. It is also okay to sell leather, suede, goose down, silk and wool products and all animal food products.… Read more »

Well said. Unfortunately one can never legislate sensitivity or even basic common sense. What we can encourage are well thought out policies and legislation that does not by some slight of hand, simply appear to be genuine. Our leaders should always strive to avoid conflicts of interest and pandering to self serving efforts but more importantly avoiding even the appearance of acting without integrity. It is the one and only measure that governs us all.

Sometimes small symbolic laws can start an avalanche. I wonder of Mayfairhouse or Nedra Volz would also want to rescind the law that forbids the sale of puppy mill animals in retail stores. At the time that that law was enacted, it would have been simple to just cross a city border and buy an animal in Beverly Hills or Los Angeles, but not anymore!!

Hopefully this is just the very start of a movement to fur used as clothing, pillows and everything else.

Keep up the good fight Mayfair House. The ban on furs they wasted their time on is about as effective as pouring out simulated Vodka was against Russians stance on gay issues…..or the new ban on trained circus animals……….THEY ARE THE ONLY CIRCUS IN TOWN !!!!! and jump through hoops for Big Money from outside of West Hollywood, like a tiger jumping through a hoop of fire !!!! They get more usless and clueless by the week !!

This is a ground breaking ordinance granting animals the right to live without being raised to be skinned. The May Fair House people should be ashamed to fight for their right to perpetuate animal cruelty.