For more than two hours, Townscape Partners’ representatives heard from concerned community members Wednesday night regarding the developer’s plans to demolish the existing shopping center at 8150 Sunset Blvd. at Crescent Heights to build a mixed-use project.

After short presentations, more than 30 concerned residents individually took to a microphone to give comments and pose questions, many of which the representatives said couldn’t be answered until a “draft environmental impact report” is done.

Residents aired a wide range of grievances with the project, including concerns over parking, rooftop sound, traffic, demolition of the Chase Bank building, which some see as having historical qualities, safety, the residential way of life being altered along Havenhurst Drive, and, above all, the 16-story height of the apartment building along Havenhurst.

Orrin Feldman, vice president of the Hollywood Hills West Neighborhood Council, which hosted the event, arranged for the meeting as a way to provide more information to the public before the Los Angeles Planning Department’s Oct. 2 “scoping meeting,” which allows for public comments on what should be studied in the draft environmental impact report (EIR). The scoping meeting will run from 5:30 to 7:30 p.m. at the Will and Ariel Durant Branch Library at 7140 Sunset Blvd., Los Angeles.

“Today’s like the first day of spring training,” Feldman said. 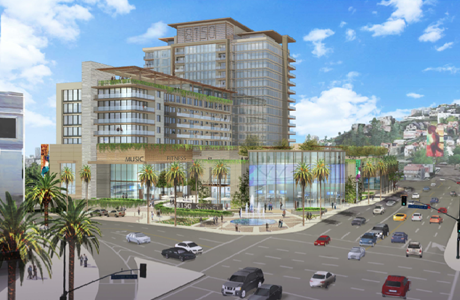 The proposed project would span 2.56 acres and include 249 total apartment units, including 28 units for “very low income households” (which means for those who make no more than 15 percent of the LA County median income, which is around $56,000), and 111,000 square feet of commercial uses, which would include restaurants, a grocery store, retail shops, fitness center and bank.

Due to how the property is zoned, there are no height restrictions for the apartment buildings. Nevertheless, many residents took issue with the height of the Havenhurst building, and requested it be significantly lowered.

In response to height concerns, Townscape has pointed to its car-free pedestrian plaza running the length of the project, 15-foot sidewalks and other open space that might be lost if it has to lower the buildings.

While LaBonge has yet to take a stance on the project pending results of the EIR and residents’ feedback, he has said in an LA Times article that he believes “it’s a little too high as proposed.”

Many residents are also worried about an increase in traffic.

A recent KPCC article pointed out that the Sunset-Crescent Heights intersection is ranked No. 24 on LA’s list of “High Pedestrian-Related Collision Intersections,” with 16 vehicle-pedestrian accidents over the last five years.

“Why buy a home in Mt. Olympus if I can’t get there?” said one resident, referring to the Laurel Canyon neighborhood just north of the project.

Others called the developer’s designs for the traffic island “disingenuous,” pointing out that the City of Los Angeles owns the island and must approve what the developers want to do with it.

“The city owns it and will continue to own it. Whatever will be put there, and we will work with the community on the best use, whether it’s a pocket park or public plaza, the city would own but the developer would be responsible for creating and upkeeping that space,” Kramer said.

Townscape also proposes a seven-level parking structure (three levels underground), which would include 849 parking spaces (295 for the residential units and 554 for commercial parking).

Responding to concerns over the amount of “compact” parking spaces included in the plans, Kramer pointed to the fact that all residential parking would be done by valet, and both valet and “valet assistance” will be offered for the commercial spots.

Loading and unloading of retail merchandise would be done “internally,” but an entrance for trucks would be included on the Havenhurst side of the project. Townscape has also said it is considering “cul-de-sac’ing” Havenhurst depending on the results of the EIR’s traffic study.

The proposed project would demolish the Chase Bank building, which the Los Angeles Conservancy considers historic. The building was formerly Lytton Center, a 1960 modern bank building distinguished by its zigzag folded plate roof.

“With its dramatic, folded plate concrete roof and glass-walled banking floor, the former Lytton Center was a striking departure from traditional bank design when it opened in 1960,” according to the Conservancy. “As financial institutions nationwide analyzed the need for progressive banking methods following World War II, architects responded by radically reinventing the bank’s form. Lytton Center typified these national postwar banking trends through its modern architectural design, transparency, and integrated art component, and is one of Los Angeles’ earliest remaining examples of this transformative shift in postwar-era bank design.”

“The conservancy believes the building might qualify for CEQA (California Environmental Quality Act) and that it needs to be analyzed,” Khalatian said. “The EIR will analyze the historic nature of the building and others in the area.”

At least one commenter also warned the representatives about the Hollywood fault, a 10-mile fracture that has sparked a battle over the Millennium Hollywood project. Developers say concerns over the fault are overblown, while residents, who are also opposed to the project’s scale, say it’s a major overlooked problem. While California law bans building directly on top of active earthquake faults capable of rupturing the surface, state geologists still haven’t mapped the Hollywood fault, leaving officials to rely on older, less-detailed maps.

The proposal requests four conditional use permits for restaurants, and the sale of alcohol from 8 a.m. to 2 a.m., along with outdoor dining. A substantial amount of the outdoor dining would be on the buildings’ rooftops, prompting some residents in the nearby hills to worry about potential noise.

When pressed on whether nightclubs would be included in the plans, Townscape insisted it had no plans for including nightclubs, and that it would have needed to file an “entitlement” to include them.

Khalatian also said that no off-site signage (i.e., tall walls and billboards) would be on the property.

I missed the Oct. 2nd meeting…I would like to be involved in the process of opposing the consstruction of such a site………I am a resident of 90046…..

Isaiah..If you were anywhere near or around, or perhaps with family or friends touring Hollywood, and standing on the observation decks on Millennium’s Towers, to view the Hollywood sign that Millennium skyscrapers will be obstructing, if they are given the go ahead to build,..(oh, and BTW, you will be charged to view the Hollywood Sign from their observation decks), and the big one hits, yes, you will explode..along with everyone else in or around their towers.. It is so easy to be complacent and shrug the realities off, but if everyone did that, and left this in the L.A. politicos… Read more »

O’Farrel led the city council to a unanimous vote to approve the dangerous Millennium projects, putting thousands upon thousands of lives at risk, ignoring the state geologist warnings about an active fault line,and caltrans warnings regarding ‘unsafe traffic conditions’ caused by Millennium projects..to not vote on Millennium projects yet..both wanting to do additional studies and testing….claiming he did his research and deemed the projects safe..This, his first day on city council. even fer all that ahs hit the fan since that dangerous vote, approving dangerous projects O’Farrell is still spewing his lies about these projects and arrogantly is still endorsing… Read more »

@ Isaiah. I know there has been a lot of Earthquake news recently. But if you had lived through the Slymar earthquake in 1972, the outcome of which created the faultline law, you would have experienced a dam almost bursting, creating the three day evacuation of 40,000 people, the death of 40 people buried in a hospital that was built on the fault, the collapse of another hospital, the National Guard being called in and fire fighting teams called in from outside states to put out fires created from power lines going down. There is a reason for caution. If… Read more »

Seems like the domino affect. The City is busted for hiding vital information about the location of a fault line (Hollywood) under the Millennium project, then the project next door to Capitol Records gets appealed by a local group on the same basis, then the media gets wind of all this and the Blvd6200 project on Hollywood/Argyle gets outed for building live work space mere feet from that same darn fault (rubber stamped by the same darn Bldg & Safety) and then we hear about Century City tower smack dab on an active fault line and now this? The exposure… Read more »

If I hear one more comment about an Earthquake Fault Im going to explode. People are way too paranoid.

L.A. Conservancy was against Millennium skyscraper projects also. Concerns were expressed on their website about compromising the Capitol Records Building ( a cultural Historical Monument) building so close to it. Then they showed up at a hearing and withdrew their opposition and told everyone “we are working with Phil” (Phil Aarons head of Millennium) Another org. bought by Millennium. They will be against this project too, until the developer makes a nice chunk of change donation to them. The only way to fight them is law suits. They have probably taken very good are of the city politicians already. All… Read more »

I’ve lived on Havenhurst since 1980. This proposed building on the Weho-LA border is an unmitigated disaster in every respect for the community. Its only being considered because it is on the LA side of the border, a trick in itself.

Welcome to the world of Garcetti’s vision for the future here and people fighting developers ruining our areas and communities. You will get help from no politico in this city..Tom LaBonge was also against Millennium skyscrapers but never showed up the day city council voted unanimously (even against caltrans and a state geologist begging them not to..who have all stepped in now..the State agencies and these dangerous skyscrpaer projects on an active fault line is on hold..the Mayor and city council actually were willing to risk everyone’s lives passing them..)..to approve. Sent a statement had he been there he would… Read more »

I’m glad to see the LA Conservancy talking about the Chase Bank building being historic. Since Chase took it over from WaMu, it has cleaned it up and looks terrific – a great example of Mid-Century Modern architecture that should be preserved. It would be great if this new project saved the building and incorporated it into the design. But I’m sure the developers will get their way and demolish another outstanding building. In return, that poor intersection will get a rather generic-looking mixed-use complex. The developers deliberately asked for taller buildings and more density than they knew they could… Read more »