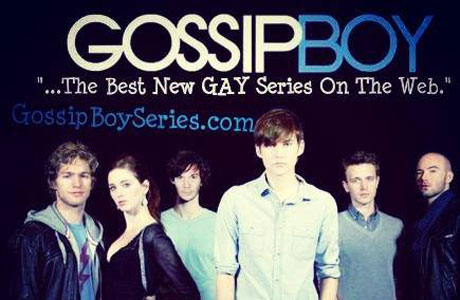 Harking back to the CW series with the same name (just a different gender—wait, what’s gender?), Gossip Boy (created by Paul Storiale) follows Jairus, a recently turned 18-year-old starting his life as a young gay man, and Mat, a 39-year-old who’s dealing with a recent breakup.

After coming out, Jairus leaves behind the memory of his dead parents and subsequent upbringing by his aunt and uncle (whom he resents) for the sunnier hills of Hollywood, CA. His plan? Start a new life with someone he met online, Nathan. We follow Jairus as he meets Nathan’s friends (one of which is touted as “West Hollywood’s #1 player”) and slowly learns that “lust isn’t love.” Meanwhile, Mat tries to work through his recent breakup from his ex, Shannon, by visiting a therapist. Not long after, he comes across a boy named Jordy, who he learns is a hustler, and the two start a friendship that gets daringly close to “daddy and son.”

Called by Frontiers LA as “one of the best new gay series to hit the web,” Gossip Boy is both intense and sweet, and will keep you wanting more by the end of the first episode. Careful, there’s a heady moment right at the start with Jairus and his aunt.