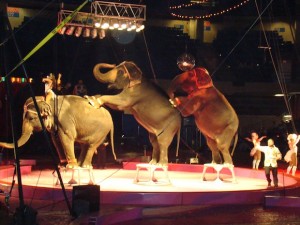 The circus is not coming to WeHo.

At least, not with animals if council members Jeffrey Prang and John Duran have it their way.

Once again set to flex their progressive pipes, the West Hollywood council members will consider an ordinance Monday that would ban the commercial display and performance of wild and exotic animals.

Included in the ban would be circus acts, carnival performances, trade shows, parades or any event that involves wild animals performing tricks or performing.

So make sure your bears and badgers aren’t showing off.

“We recognize that the circus aspect is not applicable here,” Prang said. “We’re not going to have the circus in West Hollywood. We don’t have the venue for it.”

He continued, “One thing we’ve done over the years, as far as animal welfare, is work with a community of cities in efforts to adopt state law to enact some of these reforms. For whatever reason, the state legislature can’t get its act together so we do it through grassroots.”

According to Prang, West Hollywood is “joining in the momentum” that has already started in other cities that have adopted similar ordinances, including Corona, Pasadena, Santa Ana, Huntington Beach, Encinitas, Irvine and Rohnert Park. The Orange County Fair and the Los Angeles Fair have also banned elephant rides.

Attached to the ordinance is a letter from Jan Creamer, president of Animal Defenders International, who lauds the proposal and thanks the council for considering it.

But this is nothing new for WeHo, where our pets are not “owned,” they’re “guarded.” In fact, we erred in calling them “pets” — they’re “companions.”

In 1989, the city declared WeHo to be a “cruelty-free zone for animals” and banned cosmetic testing on animals and the use of steel leg-hold traps.

In 2003, WeHo became the first city in the nation to ban cat declawing.

In 2010, WeHo banned retail sale of cats and dogs to keep out “puppy mills.”

And, most recently, WeHo was the first city in the nation to ban the sale of fur, which goes into effect on Sept. 21.

And now, if passed Monday, exotic animal performances would join the list.

No word yet if the ordinance would apply to giant pink dogs wearing water bottles and tennis shoes.

How about banning the dressing of animal companions? They should ban that too! It is ridiculous how people dress their dogs and cats. Do you think the animals like it? I doubt it.

Our City Council is ridiculous. What are they going to ban next..poverty? Hunger? Not dressing in the latest styles? Get back to addressing our City’s needs and forget about making news headlines, which is all this is about. How about addressing the lame Rent Stabilization statute that does nothing when landlords refuse to abide by the current laws?

Maybe they could ban hunger which we DO have in WeHo.

@Rik – they already ARE a part-time council. The real estate developers are the full time council.

The fact that Jeffrey Prang and John Duran have time to spend thinking about banning something else is clear evidence that West Hollywood has reached a state of nirvana. They have addressed all the other more important societal woes and are now down to circus animals.

West Hollywood needs a part-time City Council, and this new effort to ban one more thing is Exhibit #1.

This article seems to make light of a very serious subject, which is the horrible torture circus animals go through in the name of “entertainment” for human beings. There is no excuse for ignorance when there is article after article on the internet with videos that show the torture & abuse these animals endure during their “training”, the indecent & dirty conditions they are forced to live in between “shows” while being chained by the neck or legs, not to mention their sad & depressed states of mind while in captivity. Activists against the use & abuse of keepings animals… Read more »