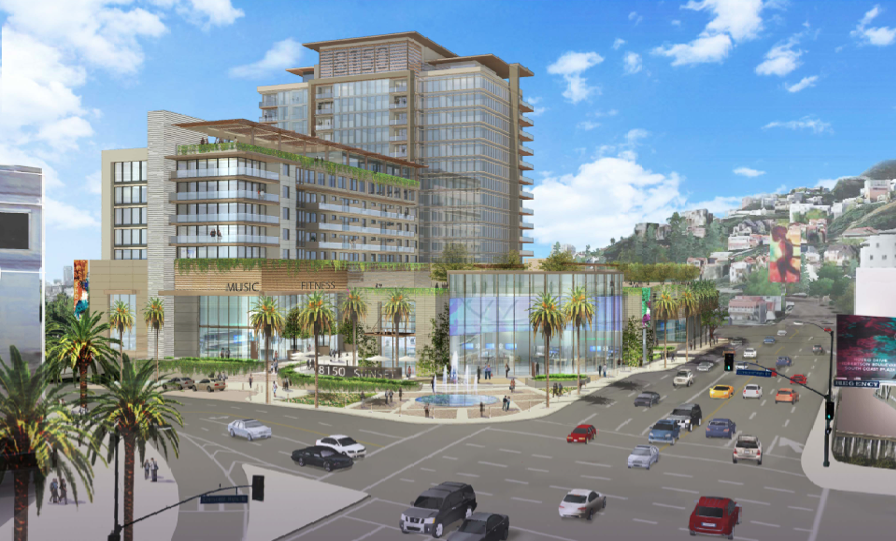 Townscape Partners has filed an application with the City of Los Angeles Planning Department proposing to demolish the existing shopping center at 8150 Sunset Blvd. at Crescent Heights, which serves as the eastern gateway to WeHo’s Sunset Strip and once housed the iconic Garden of Allah, and redevelop the site into a mixed-use project. 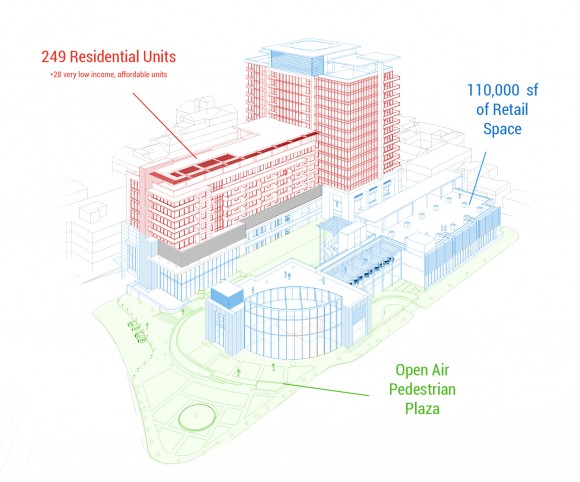 “We believe our project is fitting of a site of such prominence,” said Townscape Partner’s principal Tyler Siegel, referring to the Garden of Allah, which occupied the property until 1959. “Our project will stand as modern gateway to Hollywood and the Sunset Strip.”

Townscape Partners also proposes a seven-level parking structure (three levels underground), which would include 849 parking spaces (295 for the residential units and 554 for commercial parking). The proposal requests four conditional use permits for restaurants, and the sale of alcohol from 8 a.m. to 2 a.m., along with outdoor dining. A substantial amount of the outdoor dining would be on the buildings’ rooftops.

The developers are currently moving forward with doing a draft environmental impact report (EIR), and will hold a “scoping meeting,” which allows for public comments, in early October. Once a date is determined for the meeting, mail notices will be sent to residents within 500 feet of the project, and the meeting details will be posted on the Los Angeles city website. In the proposal, filed in August, Townscape says it expects to start the project in 2014 following approval, with completion in 2017. 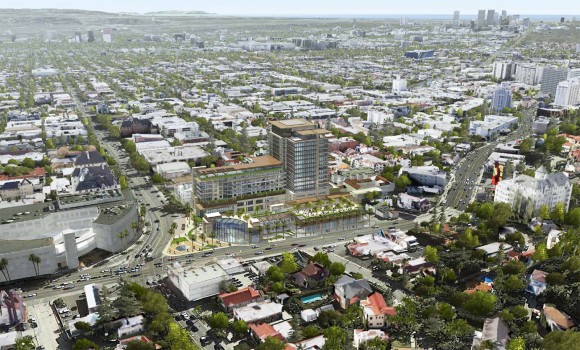 The iconic property was once home to the Garden of Allah, which was built in the early 20th century as the home of actress Alla Nazimova. During the 1920s through 1950s, actors, performers and writers called the Garden of Allah home. The property was demolished in 1959, and, according to urban legend, was the inspiration behind the line in Joni Mitchell’s song “Big Yellow Taxi,” “They paved paradise and put up a parking lot.”

Townscape also proposes to develop over the traffic island at Sunset and Crescent Heights. The island was once the location of Pandora’s Box, a famous rock ‘n’ roll nightclub and center of the Sunset strip curfew riots in the mid-1960s.

“Today, the traffic island is a barren desert with a palm tree or two on it,” said Gabe Kramer, a communications consultant for the project. “The Garden of Allah site is a strip center, built in 1960, and has stayed that way for a long time. These guys are committed to bringing interest back to the site. They want to do that in a respectful way, whether that be anything found under the pavement brought to light, or a dedication to the Garden of Allah.”

According to Kramer, the project has been “relatively well-received” by the greater community.

Tonight, the Hollywood Hills West Neighborhood Council will hold a 5:30 p.m. meeting to discuss the project at Will and Ariel Durant Library, at 7140 Sunset Blvd. in Hollywood.

“The NBCUniversal (Evolution Plan) redevelopment project took seven years,” said Orrin Feldman, vice present of the Hollywood Hills West Neighborhood Council. “We really learned as a group how to focus on major development issues. Compare this to NBCUniversal, and we’ve had a pretty good introductory course.”

“Over the next six to eight months, we’ll have that conversation with the community,” Kramer said. “We have 10,000 square feet of open space. What do you want to see there? A dedication to the Garden of Allah? Pocket Park? Literally, you paint it, we’ll see what we can do there.”

Currently, the site, which is just outside West Hollywood’s borders, is home to Suncrest Plaza, which includes a number of small retailers, such as Subway and El Pollo Loco, and McDonalds and a Chase Bank.

Townscape Partners, which bought Suncrest Plaza strip mall, at 8128-8178 W. Sunset Blvd. just below Chateau Marmont, last year, has been embroiled in a lawsuit dispute with a number of the retail tenants, who have claimed new parking fees established by the landlord were part of a plan to put them out of business to make room for a mixed-use project. Townscape began charging customers $3 per 15 minutes for parking in March, but has since stopped charging after it was told to do so by the city of Los Angeles.

According to Kramer, gates, which were previously installed for paid parking, will soon be removed.

In West Hollywood, Townscape Partners has also proposed a controversial development plan at 8899 Beverly Blvd. between Robertson and Doheny. West Hollywood West neighborhood residents have organized to fight that proposal, which would expand a commercial building (“ICM building”) and add town homes and affordable-housing units nearby.

@Steve, Uh-oh…Heidi Shink called WeHo an Urban Village last night at the Planning Commission Meeting! I guess she won’t have your vote…or worse she must have been hanging out with Steve Martin! No one is talking about YOUR car that is already there. They are talking about the 2,250 NEW vehicles spewing tons of toxins into the air as they come and go from their homes in your neighborhood. It will be interesting and I feel sorry for all of your neighbors who do not have the luxury of working from home or are unable to walk anywhere. It is… Read more »

The developers cannot seriously expect to get away with taking away the right turn lane from east bound Sunset onto Crescent Heights? It sure looks that way in the drawings. Would that be one of the pre-planned “concessions” they will let the council ‘demand’? This will certainly get scaled down before approval. I’m an agnostic on this one as the existing mall is dreadful, but this architecture strikes me as rather generic.

Riley: I have not forgot and I look forward to tons more businesses so that my car reliance will be greatly diminished.
Might I suggest moving to my neighborhood….it’s going to be great!

@Steve – Reminder: 2,250 additional cars in the 5 sq. blocks in YOUR neighborhood. Enjoy!

Riley….Please move from Metropolis before the Armageddon of destruction and disaster commence. None of us are safe because of the progress being made in our city….run while you can!!!!

What do you mean West Hollywood is gone? I think what you mean is that the unincorporated city of Sherman is gone. Because since West Hollywood was established the growth really hasn’t stopped. This level of development is status quo so I’m not sure what DELUSIONAL world YOU are living in. The only difference is that developers are finally tackling our “problem” areas (eastside, Crescent Hts/Sunset).

Joni Mitchell’s line, “They paved paradise and put up a parking lot,” in the song “Big Yellow Taxi” in no way refers to the bulldozing of the Garden of Allah in October 1959. The fact is, Joni Mitchell was 16 years old in 1959 and did not move to Los Angeles until 1968, at which point the eyesore shopping center that is there now had occupied the former Garden of Allah Hotel site for nine years. Mitchell did not write “Big Yellow Taxi” until 1970 — and this is key — the next line in the song clearly proves she… Read more »

This will be a great improvement to what is now a very ugly strip mall. The retail component is a reasonable ratio considering its A 2.5+ acre site. Nice architecture, much needed housing Where people want to live….from what I see, I’m in favor of This as long as there’s ample open space at the street level. I’m a 25 yr resident of laurel canyon. The nimby’s will have a loud Voice, but we are a city folks. Growth is going to happen. I’m sure they’ll be some traffic mitigation requirements. The developer needs Works with the community, and provide… Read more »

@ Steve – Abbe Land called it an Urban Village. The pollution from 2,500 more cars cannot be a good thing anywhere. Ralphs is ridiculously over priced, and aren’t they the ones who had grease or something in their refrigerator section, talk about gross. And I will bet that Trader Joe’s does not consider itself a “second rate retail establishment”. If you live near the Faith Plating site, I can only wish you good health in the future. It is a toxic nightmare. Don’t believe the developers who say they are going to clean it up and whatever you do… Read more »

Snarkygal: Let’s see….I’m pleased with the development. The 125 people who showed up to speak in support of Movietown plaza are pleased with the development. The dozens of people who showed up to support the Monarch Projects are please. The residents of Formosa/Lexington/Detroit are ALL pleased with that Faith Plating is about to be taken down. Stop mourning the loss of second rate retail establishments and consider how fantastic the new east-side is going to be! As for Target, I’m not sure why you’ve made the decision to avoid it, but please consider that spending money in West Hollywood keeps… Read more »

@Steve I know of NOBODY that is pleased with all the development going on in eastern West Hollywood and I live here. We all mourn the loss of the Trader Joe’s, my Russian neighbors mourn the loss of Jon’s, and I don’t know of anybody that grocery shops at Target. I won’t even shop at the West Hollywood Target. Most in my neighborhood (Hampton and Spaulding) that I know can’t afford or want to use delivery services. I tried Von’s delivery and they got my orders wrong every time. I may be a llittle west of these projects, but they… Read more »

@Riley: First off, I was referring ONLY to the physical structure of the buildings. And I’ll stand by my previous statement–the developers all sought out input from the neighborhood residents, of which I am one! I live in the middle of the Monarch projects, Movietown Plaza and the soon to break ground Faith Plating project. Almost everyone is thrilled about the changes taking place. Along with some extra traffic will come more safety, better shopping options and an overall better community oriented neighborhood. You act as if the loss of TJ’s and Jon’s (gross) are some great loss. They aren’t.… Read more »