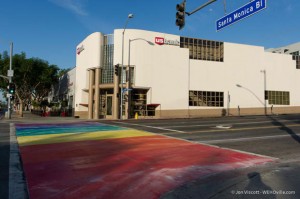 A gay walk of fame. Utility boxes painted with a gay-theme design. A town-hall meeting after next year’s gay pride festival.

All are just a few of the ideas being tossed around by West Hollywood’s Lesbian and Gay Advisory Board for the upcoming year.

Here’s a rundown of what was discussed at Thursday night’s LGAB meeting where the board’s various subcommittee’s made progress reports:

Intersection of San Vicente and Santa Monica boulevards – In addition to discussing possible names for the intersection, which is viewed as the heart of the city’s gay district, the committee may suggest other amenities for the intersection to the City Council. Those amenities include installing a gay walk of fame honoring various heroes of the LGBT rights movement, painting the remaining two crosswalks rainbow colors, creating plaques commemorating major gay protests/gathering that took place in the intersection and adding flagpoles flying the flags of various gay-related groups (bears, bisexuals, etc.). The committee would also like to see a decoration over the intersection, such as rainbow colored arch or halo.

Utility Boxes – The board views utility boxes, which are on sidewalks beside many major streets, like canvases waiting for an artist. The decorated boxes could have gay-themed designs or include important information about the gay community. The committee believes it would set West Hollywood apart from other cities. Since there are several utility boxes at the San Vicente-Santa Monica intersection, the committee suggested starting there and, if successful, spreading the painted utility boxes to other parts of town with appropriate themes for each part of town (such as Russian themes on the eastside).

Outreach – LGAB would work with other groups on projects. Ideas mentioned include holding a town-hall meeting with Christopher Street West (the group that puts on the yearly gay pride festival) for community feedback following next year’s gay pride festivities, holding a Transgender 101 workshop with the city’s Transgender Advisory Board and addressing the Russian Parliament’s recent passage of anti-gay laws with the city’s Russian Advisory Board.

@90069 that obelisk idea is SICK! That would be SO cool to look at. Now that is brilliant.

I have long thought that West Hollywood should be the host of a Lesbian and Gay Hall of Fame type venue. So many of us are ignorant of our past, and of the immense contributions we have made to society throughout history, in spite of our oppression. Not only have we contributed to general society in the ways in which we have exercised our talents, but we have also been instrumental in some of the most important social movements of our, or any time. While Museums themselves tend to be “stuffy” affairs, the original thought behind a “Hall of Fame”… Read more »

WHo pays for this? More parking tickets… higher priced meters… higher taxes…WEHO is out of control… with spending.

@90069 I tend to agree that we wouldn’t need to reinvent the wheel. The ONE archives are kind of hidden back off Robertson & El Tovar – not exactly a neon sign pointing the way. I’d like to see the One Archives brought “out of the closet” and combined with museum-type exhibits showcasing LGBT history, with an emphasis on Los Angeles. Skip the Walk of Fame thing – it’s not really original. And combine it with AIDS memorials. One organization to support LGBT history is probably all that could be sustained in a community as diverse and fractured as L.A.… Read more »

I don’t think either idea is brilliant. I’m not trying to be rude but there are problems with both. The first, and most critical, is cost. You mention that we already have the ONE Archives, which has a main branch in South Los Angeles and gallery on Robertson, both of which are not mobbed with people and in need of expansion. It would make much more sense to support our current One Archives than creating a new entity that will focus on similar subjects. There are only so much major LGBT donors to go around. It would be a PR… Read more »

so let’s now hear your “other alternatives” ASAP?

Jerome, you seem like a nice lad and indeed this Yahoo piece is salient, yet I think you are missing our gentle point. You may be as brilliant as Orson Welles, but it just may be best to let others toss the platitudes at ya. Self-effacing is a cute face! Just think on it.

Dana, I don’t need to miss or understand your gentle point. I get paid for my marketing and PR ideas all the time. I gave these 2 brilliant ideas to the city for free. You are missing out on my positive insight to what I know are brilliant ideas. Just because you believe I should not think my ideas are brilliant is your own limited vision and loss. I know you did not even know that there was in our own City of West Hollywood a historic preservation application in the past on the Spago’s restaurant when you mentioned this… Read more »

That is for others to determine Jerome. No matter how long you have been in marketing. It is up to the “customer” if your ideas are brilliant.

Hey Snarkygirl, which you are probably Snarky 24/7, it’s actually up to whether people, residents, the city and city council realize that to have a city almost 30 years old where no one comes to see a specific new thing that is not a bar, restaurant, store or club. It has nothing to do with what you are labeling the “customer” as when you do city planning you try to figure out what is important culturally. Having tour buses slow down on Sunset Blvd. outside the Viper Room to say that’s where River Phoenix over dosed and died Halloween night… Read more »

@Dana Miller — We know a first-class Pride event is possible. The talent exists and is willing to do it. But the locomotive (good metaphor) is difficult to derail. If the City Council simply stated that it wasn’t going to give the contract and permits to CSW and put the whole event out for proposals, I think we would get some amazing ideas. The Rodney Scott bandwagon plays one note and we’ve heard it (with some variations) for a very long time. It’s time for fresh blood and new ideas. Dana, I know you could produce an amazing event and… Read more »

How about starting with community feedback NOW, before the next Pride event? Why wait for next year? How about recommending to the City to give the contract for Pride to another promoter? How about asking CSW to change its name to reflect the fact that LA Pride isn’t some west coast franchise of NY Pride? I’d rather see a LGBTQetc museum and archives in one of those many empty spaces along SMB. I know we have the ONE archives, but it’s not in a prominent location. Having a very visible location would be a welcome addition to the Boulevard and… Read more »

A museum is something that would be a tourist magnet to the area and something that could be a real source of pride for the LGBT community. The WeHo Chamber of Commerce should get behind it too because of the potential of filling up more beds and tables.

Yes, Todd I came up with two major tourist attractions for the City of West Hollywood 15 years ago and still today we have neither the West Hollywood Walk of Fame and do not have the National Museum of Lesbian and Gay History. It’s sad because I know my 2 marketing tourism ideas for this are brilliant and well still 15 years later we are waiting to see something other than another store, bar, hotel or restaurant being opened.

FYI: Post for a reader who is having trouble with our posting system. So we volunteered to help! (Jerome: Please re-consider tossing about hyperbole like “brilliant” when you write about yourself. Leave it to others. Humble pie seems more secure and is cuter 🙂 That said: The community needs to rise up now, today and discuss Pride. (If indeed they care) Rodney has at least feigned his interest. Councilman D’Amico has stated he wants to look into it…What the hell is stopping this locomotive from improvement? It’s a club. That’s the deal…Like an uncool Jet’s or Shark’s. A few years… Read more »

I have 15 years of marketing experience and my ideas are brilliant.

Rik has a great point. Now is the time to hear what people want, not after another year of ho-hum boring festival. I know the folks who put it on work very hard. It’s not about that. It’s about their lack of creativity and rejuvenation so that it is worth the time and money to go to the festival. A parade is a parade; probably won’t change that much, though having grand marshals and others who really care and connect with us would be nice. Did anyone else notice that when the celebrity grand marshal this year was on TV… Read more »

Why have the pride parade/festival discussion after next year’s parade? Why can’t we have it next week? What’s the value of having another miserable, outdated event?

15 years ago I presented my original idea for a West Hollywood Walk of Fame beginning in 1998 and included it in all four of times I ran for city council. Here’s the link: http://www.smartvoter.org/2005/03/08/ca/la/vote/cleary_j/bio.html