[dropcap]W[/dropcap]est Hollywood is getting smaller, the men are getting older, the population is becoming more ethnically diverse, and people really like living here.

Those are just a few of the results of a four-month study conducted by city that explored demographics, community health issues, housing conditions, transportation needs, social services needs, communications needs and overall quality of life.

The study, which included a mailed and online survey, various “pop up” workshops in public places, focus groups and interviews with civic leaders, comes on the heels of one conducted in 2006. Earlier surveys were conducted in 1994 and 1998. The city government uses the survey to assess community needs and allocate resources. For example, the city council increased funding for programs for frail seniors and low- or fixed-income residents after the 2006 study showed those as major needs. The study also includes information from the U.S. Census Bureau’s American Community Survey from 2010, UCLA’s Williams Institute and the Los Angeles County Department of Public Health. 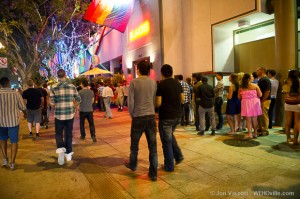 The study reports that the city’s population has shrunk since 2000, when there were 35,716 residents living in 23,120 apartments and houses. In 2010, the city counted 34,399 residents living in 22,511 houses and apartments. That’s a 3.7 percent decline in population and a 2.6 percent decline in households. The average number of residents per household in this overwhelmingly single city is 1.53, almost half of that for Los Angeles as a whole.

The percentage of households living below the poverty level (13 percent) has increased since 2000, no doubt because of the recession. But it still is fewer than the 15 percent if Los Angeles County impoverished households.

WeHo’s health issue is HIV/AIDS, where Los Angeles County Public Health department numbers show the percentage infected is greater than in most other Los Angeles County communities. Just fewer than 7 percent of West Hollywood’s residents (2,328 people) are living with HIV or AIDS.

Although HIV/AIDS also afflicts heterosexuals, if one were to assume the disease is mostly concentrated in the city’s gay male population, which makes up about 40 percent of city residents, that would mean that almost two of every 10 gay men in the city is HIV positive. The number of people living with AIDS is 1,250 the study estimates. The public health department considers numbers from 2010 through 2012 to be provisional and subject to updating.

The good news is that the number of people diagnosed with HIV has been falling. There were more than 200 new diagnoses per year in the mid-1990s and as of 2009, the latest year for which numbers are available, there were only 35 diagnoses. Also, while 150 people on average died of AIDs in West Hollywood in the mid-1990s, the number dropped to 31 in 2009.

In the last 10 years, the city has added only 375 housing units, although the population has decreased during that period. The city’s housing stock largely consists of buildings with five or more units. The proportion of residents who rent (78 percent) has remained stable in the last decade and is significantly higher than that of the whole county, where 52 percent are renters. City residents are less transient, a likely effect of the recession, with only 39 percent of them reporting in 2010 that they had moved in the past five years compared with 60 percent reporting a move in 2000.

The percentage of West Hollywood residents who drive alone to work has declined from 2000 to 2010, with 71 percent reporting driving alone in 2010 compared to 75 percent in 2000 according to the U.S. Census. There has been little change in use of public transit, with figures increasing two percentage points to 7 percent between 2000 and 2010. Those who used public transit, however, were relatively affluent, with 82 percent of WeHo transit riders claiming an income of $14,999 or more compared with only 55 percent of those in Los Angeles County. The community survey found daily usage of an MTA bus among 6 percent of residents, while less than a half percent used the free Cityline Shuttle daily. Residents surveyed were most satisfied with the city’s Dial-a-Ride program and least satisfied with the Cityline Shuttle and taxi coupon program. They asked for better information about routes and times and more frequent operation of transit services.

Other suggestions included closing major streets on a weekend day to encourage pedestrian traffic and widening sidewalks in the city’s east side. Traffic congestion was an issue, with those participating in the survey suggesting car sharing options and shuttles for weekend visitors. There were also suggestion for better enforcing bicycle laws to reduce the number on the sidewalks and for enhancing bike lanes.

The city isn’t just gayer than your average locale — it’s older as well.

Only a sparse 5 percent of households have children 18 and younger; that’s down from 13 percent in 1980. The few youth who do live in WeHo, though, are overwhelmingly the preschool set: kids 5 and younger comprise a full 42 percent of the city’s youth.

Meanwhile, 15 percent of WeHo’ans are seniors (ages 65 and up) — down since the last survey but still significantly higher than county’s 11 percent. Most WeHo seniors are between 65 and 79; only about one-third are 80 or older.

Pffft. I love how they say people aren’t dieing from HIV/AIDS as much. Where is the report that shows our community is dieing from cancer related deaths because they are HIV poz and taking meds that cause cancer. To me that is HIV related deaths. I see it every day at The hospital. Flawed stats. Nobody wants to know the truth about HIV meds . Living in a false world in WEHO …

What does too many cars mean? How many are you permitting on OUR streets? Is there a number? Driving in West Hollywood is no more dangerous then driving in Des Moines. Where are the facts showing that our streets are unsafe. If anything, I’d argue that because West Hollywood manages itself so well, it allows us to drive on streets free of pot holes and litter–certainly not the case in Los Angeles. If you’re guest took 30 minutes to find a parking spot then they should probably not have a drivers license–in other words I simply don’t believe you. MY… Read more »

No, Steve, it’s not that amazing–it’s tragic. We have too many cars on our very dangerous streets now, with people making bonehead moves at our major intersections that lack enough left turn arrows though there are left turn lanes. Just the addition of Connie and Ted’s has made visitor parking on Norton impossible–twice in the last week my guests have had to drive around for a half hour looking within 5 blocks of here in order to use my guest parking pass. The city council has been purchased by the developers and the residents have a lower and less safe… Read more »

Really Chloe? Do we need to explain this to you every week? You keep forgetting that we are a tiny city in the middle of the 2nd largest city in the country. These residents won’t be hatched, they will be new residents who choose to move here from other homes and apartments because of beautiful new housing units and fantastic new retail businesses. Those that move into these buildings from other West Hollywood housing units will provide landlords the incentive to improve their properties to compete with the new buildings. It’s really amazing how it all works. West Hollywood is… Read more »

I find the housing stats fascinating. If the population has decreased how are the behemoths on La Brea going be rented or purchased and by whom? “If you build it they will come?” I wonder.

Very interesting discussion of the survey results.
I do find it ironic that the photo you chose to accompany the “housing” segment is that of the building “Ellised” by its owner – so is no longer part of our housing stock.

very interesting facts and statistic, thanks.