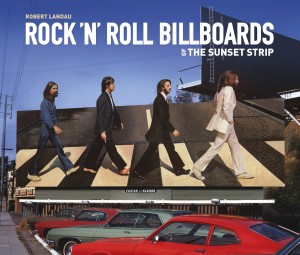 An exhibition featuring photos from West Hollywood photographer Robert Landau’s book “Rock ‘n’ Roll Billboards of the Sunset Strip” will be held at 5 p.m. on Saturday, Aug. 10 at the West Hollywood Library, 625 San Vicente Blvd. in between Santa Monica and Melrose.

The exhibit will be on view through mid-October during regular library operating hours. Landau will also sign books on Saturday, Aug. 3 at the Sunset Strip Music Festival.

Landau, who grew up on the Strip, rediscovered decades-old “Kodachrome” photos of rock ‘n’ roll billboards he shot during the 1960s. In his book, he interviews the artists, record producers and designers who shaped the billboards during a thriving Strip music scene.

For more information about the exhibit, including RSVP information for the artist talk, visit www.weho.org/arts  or call (323) 848-6377.