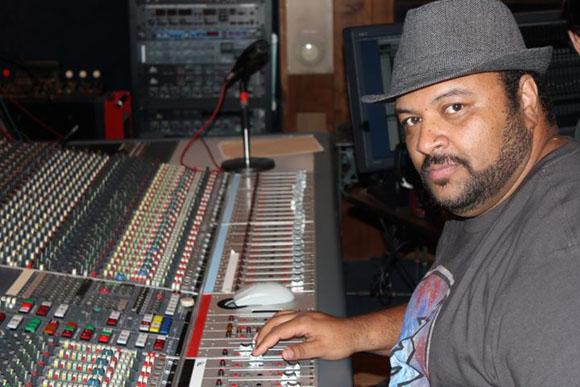 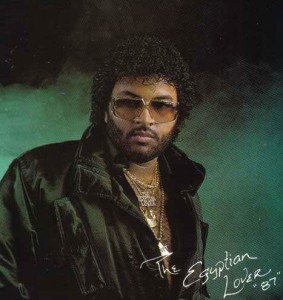 With so much rock ‘n’ roll on the bill at the Sunset Strip Music Festival, it’s nice to see some hip hop classics making the list. In the early 80s, Egyptian Lover was a pioneer to hip hop, synth and electronic music, as well as the 808 drum machine. Now, almost 30 years later, he will showcase his brand of “party music” at the Whisky a Go Go on SSMF’s final day, Saturday, Aug. 3.

His biggest hit might have been 1983’s “Egypt, Egypt” from the album “On The Nile,” but there are a multitude of other classic party starters, such as “D.S.L.’s” and “One Track Mind.”

We got a chance to talk with Egyptian Lover as he recalled the days of his youth as a DJ in Los Angeles, and how he’s kept the party going for so many years.

Question: How did you come up with your name?

Answer: “I got my name from two places, King Tut, that’s where the ‘Egyptian’ came from, and Rudolph Valentino, that’s where I got the ‘Lover’ from. I liked them very much growing up.”

Q: In the early 80’s, what was driving you to create this new type of sound?

A: “I was DJ for Uncle Jamm’s Army, we did huge parties all around L.A., in a sports arena with 10,000 people. So to keep the people dancing, I had to become a better DJ and give them something the others didn’t. I brought the drum machine to the dances and played beats for ‘em and did different scratches, trying different tricks. It led to me being a producer for my own music. At that time, there really wasn’t that much rap out there, I kind of got my influences from Kraftwerk and Prince and came up with my own style.”

Q: How did you get involved with SSMF?

A: “This one guy I know from the Whisky a Go Go. I was painting some 808 paintings and he bought some from me. So when this came up, he thought of me immediately.”

Q: Who are you most excited to share the SSMF bill with?

A: “Pretty much everybody, there’s all kinds of music and all kinds of love. I love checking out different groups and havin’ fun seeing how people perform. I’ve never seen Linkin Park perform and of course my hip hop guys. The last time I seen Doug E. Fresh, he put on a great show. So I can’t wait to see him again.”

Q: Is there a new album in the works? Title?

A: “I’m working on a lot of things because next year will be my 30th anniversary in the business. I’m working an anthology with Stone’s Throw Records, out next year. Also a brand new album called “1984,” inspired by all the music from 1984. I’m using all the old equipment and recording it the same way in the old style professional studio, even mixing it down to tape.”

Q: At SSMF, are you performing the classics, new tunes or both?

A: “I’ll be performing the classics and maybe doing some DJ skills, playing some old 80’s stuff from Uncle Jamm’s Army to give the evolution of how I started as a DJ and how I became the artist I am today. Probably play some 808 beats live and some singing and raps over that.”

Q: Tell me a crazy story or two about the hip hop scene in the 80’s.

Q: Of all the venues you’ve played, which is your favorite?

A: “My highest point was when I headlined the Sydney Opera House, Australia.”

Q: Does your music have a message?

A: “I just want to make you dance. Don’t worry about anything else while you’re listening to my music. Have a good time.”

Q: What about social or political issues in your music?

A: “They can worry about that during their 9 to 5, during the daytime. When it gets to nighttime, just listen to the beats and dance and let it go.”

Q: How do you like to expand your mind?

A: “Doing shows and concerts, getting vibes from people. That keeps me going.”

Q: What has kept you going for all of these years?

A: “I just love what I do. It’s not really a job to me. I go all around the world doing shows.”

Q: What would you like to do beside from music?

A: “I do a lot of painting and drawing, different kinds of writing. I do a lot of abstracts. I paint a limited edition of the 808s, the drum machine I use. Only my family and friends have them now. I haven’t shown them to the public yet. We’ll see in the future.”

Q: Do you have any advice to up-and-coming musicians?

A: “Never give up and be true to yourself and make the music that you like to make, no matter how you can make it; in a studio or on your iPhone. Make the best possible music.”